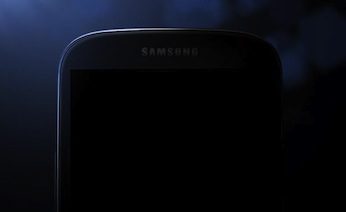 Samsung will unveil a Galaxy S 4 Thursday, March 14, during an evening event at New York City’s Radio City Music Hall. While rival Apple’s strategy has been to acknowledge nothing until an executive is standing on a stage ready to hold up something, Samsung has instead been trying to walk a line between revealing and concealing.

It’s not an easy line to walk, when seemingly highly guarded secrets continue to leak out.

On March 12, @SamsungMobileUS Tweeted an almost entirely dark image that showed one corner of the rounded-edged Galaxy S IV in silhouette. The company asked, “Who’s ready for the Global Unpacked Event on March 14?”

From the little one can tell, the Galaxy S IV will bear a strong resemblance to the Galaxy S III—a suggestion also made by photos posted this week to Chinese user forum 52 Samsung and said to be the Galaxy S IV. The photos show a phone generally shaped like the S III, though larger, and with a pattern or perhaps texture in the back paint.

An odd disconnect—Samsung used Roman numerals with the S III, but in advertisements in conspicuous areas of New York, London and beyond, it’s been using a 4. Also odd—a series of videos featuring a rather wanting child actor as the keeper of a box said to contain Samsung’s (sunshine-bright) next big thing.

A March 3 leak from an Android developer suggested the S IV will feature a 5-inch Super AMOLED display with a resolution of 1080p HD, run Android 4.2, known as “Jelly Bean,” have an 8-core processor, up to 64GB of storage, 2GB of RAM and a 13-megapixel camera.

Three days later, Boy Genius Report posted screenshots from GSM Israel and SamMobile, said to be from the Galaxy S IV. They detail features including Smart Scroll, which, by watching the user’s eyes, automatically scrolls the display when a user gets to the bottom of the screen. It’s an advancement on the technology in the Galaxy S III that prevents the screen from dimming, when the phone knows the user is reading.

“The screen will start to scroll automatically if the device detects that you are looking at the screen,” explains the screenshot in the image.

The latest leak is that the Galaxy S IV will feature a 3D camera.

Research firm Strategy Analytics says that it’s also expecting the next Galaxy to have better touch capabilities, a better battery, “jazzier maps,” more Hubs, such as a Reader’s Hub, and iPhone-like pricing.

Regardless of what’s being revealed, concealed or leaked, what’s for certain is that Samsung needs the S IV to continue the momentum created by the S III.

Samsung introduced the S III last May, and enjoyed an entire summer of sales without a new iPhone to slow it down. Analysts have suggested that Apple has smartened up, and will introduce its next iPhone much earlier in the year than its last. Though clearly Samsung, too, has adjusted its timeline.

During the third quarter of 2012, the Galaxy S III unseated the iPhone and became the world’s top-selling smartphone. It was a short-lived accolade—the iPhone 5 look the title during the fourth quarter—but a very telling one.

The most important thing for Samsung to do now is “not to do or say anything ‘bad,'” Neil Mawston, Strategy Analytics executive director, wrote in a March 12 blog post. “Apple lost heartshare when it mislaunched Maps alongside the iPhone 5 last year. Samsung must not replicate Apple’s strategic misstep.”