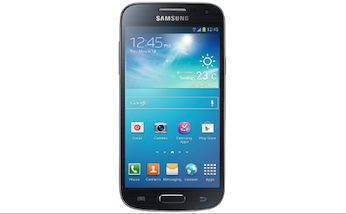 Samsung has made a fortune, and claimed the industry’s leading market share, feeding the consumer appetite for smartphones with large displays. However, recognizing that some folks want a phone that can fit in a pocket, it has introduced the Galaxy S 4 Mini—a more petite and less powerful version of its newest flagship phone.

“We want to give people more choices with [the] Galaxy S 4 Mini,” JK Shin, CEO and president of IT and Mobile Communication at Samsung, said in a May 30 statement. “[It has a] similar look and feel of the Galaxy S 4, for more compact and practical usages.”

The statement added that the phone has a “highly portable, chic and compact design” and can be carried and operated “with one hand.”

But the perks don’t stop there.

The S 4 Mini has a front-facing 1.9-megapixel HD camera, an 8-megapixel rear camera and the S 4’s same Sound and Shot feature, which takes and stores audio along with a photo. And there’s a Story Album function, which can automatically arrange photos in a “smart format.”

GroupPlay is also included, so friends with the same phone can listen to the same music and play the same games. For traveling, there’s an S Travel application that makes recommendations, and Samsung’s S Translator, which can translate voice in real time, or text messages.

In the Health and Well-Being category, the S 4 Mini can access a health app from Samsung Apps, to help users monitor their caloric intake or measure things like their daily steps or weight.

Samsung’s WatchON feature is also included, enabling users to turn the S 4 Mini into their television remote, as is Samsung Link, for sharing content across multiple Samsung devices.

In short, most of the key features of the S 4 are included, in a package offering less screen real estate and horsepower.

The S 4 Mini will come in White Frost and Black Mist. Samsung plans to let the media and its partners get their hands on the phone at a “Galaxy & ATIV, London” event it has planned for June 20.

Availability will depend on the market, said Samsung, which didn’t offer a release date or pricing information.

The Galaxy S 4 is available through seven carriers in the United States, and via retailers including Best Buy, Costco, Radio Shack and Sam’s Club.

After introducing the Galaxy S III last May, Samsung introduced an S III Mini in October 2012, though it has hardly received U.S. distribution. It’s currently only available in the United States through Amazon.com.