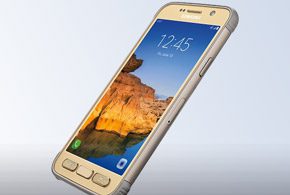 The Consumer Reports tests were conducted to test Samsung’s water-resistance claims, according to a July 8 article by the magazine, by submerging a Galaxy S7 Active handset in the equivalent of 5 feet of water for 30 minutes. The first phone was placed in a water tank that was pressurized to 2.12 pounds per square inch to simulate 5 feet of water, and a timer was set for 30 minutes, the story reported.

“When we removed the phone, the screen was obscured by green lines, and tiny bubbles were visible in the lenses of the front- and rear-facing cameras,” according to the story. “The touch-screen wasn’t responsive.”

Following the first failed test, a second Galaxy S7 Active was tested and also failed, according to Consumer Reports. “After we removed it from the tank, the screen cycled on and off every few seconds, and moisture could be seen in the front and back camera lenses,” the report concluded. “We also noticed water in the slot holding the SIM card.”

The display screens of both phones would light up when the phones were plugged in over the following several days, the story added, but the displays could not be read. “The phones never returned to functionality,” the article said.

Consumer Reports said that Samsung told the magazine that it has received “very few complaints” about any such problems and that “in all cases, the phones were covered under warranty.”

Samsung also told Consumer Reports that “there may be an off chance that a defective device is not as watertight as it should be,” adding that is investigating the incidents.

In a post on its own Website, Samsung responded to the Consumer Reports article on July 8 by saying that the S7 Active is “IP68 certified for water resistance and has gone through strict quality assurance testing to ensure that it meets and exceeds industry standards. We are currently speaking with Consumer Reports to understand their experience and will closely explore their feedback.”

A company spokesman did not immediately respond to an eWEEK request for more details about Samsung’s response to the failed Consumer Reports tests of the handset.

Consumer Reports previously had tested the standard S7 and S7 Edge smartphones for water-resistance compliance with the IP68 specifications and both passed the tests, according to the publication.

In a television ad for the Samsung Galaxy S7 Edge, hip-hop star Lil Wayne pours Champagne over the phone and dunks it in a fish tank to impress several friends.

The standard Samsung Galaxy S7 and S7 Edge smartphones currently top Consumer Reports’ smartphone ratings, with excellent scores for their displays, battery life, cameras, and other attributes, according to the magazine.

The ruggedized Galaxy S7 Active was launched in June exclusively by AT&T, according to an earlier eWEEK story. The handset follows the ruggedized Galaxy S6 Active that launched in mid-2015, but gained a bevy of improvements from the latest Galaxy S7 and S7 Edge phones. The S7 Active has a shatter-resistant and water-resistant 5.1-inch Super AMOLED Quad HD touch-screen display and is aimed at users who work and use their phones in hostile environmental and physical conditions. The $795 phone also meets MIL-STD-810G specifications for dirt, dust, temperature, shock and salt resistance. The 5.1-inch display is the same size as the one found on the Galaxy S7 handset.

The Galaxy S7 Active features a Qualcomm Snapdragon 820 processor, 4GB of memory, 32GB of on-board storage, a microSD card slot for expandable storage up to 200GB, a 4,000mAh battery and fast charging capabilities. It runs on the Android Marshmallow operating system.

The S7 Active includes many of the features of the latest Galaxy S7 and S7 Edge handsets, including a 12-megapixel rear-facing camera with Dual Pixel technology for great images even in low light conditions, a fingerprint sensor for security and the Samsung Knox defense-grade mobile security platform to protect user data. The handset also includes an always-on display, a customizable “Active” key that can be set to call up an oft-used function, a 5-megapixel front-facing camera and WiFi, Bluetooth 4.2 and near-field communications connectivity capabilities.

Both the S7 and S7 Edge models include always-on displays for the time and other information. Both also are powered by Qualcomm quad-core 2.15GHz and 1.6GHz processors for U.S. users and include 4GB of LPDDR4 memory, 32GB of built-in storage and microSD expansion slots that support storage cards up to 200GB. The Galaxy S7 has a 3,000mAh battery while the Galaxy S7 Edge is equipped with a 3,600mAh battery.