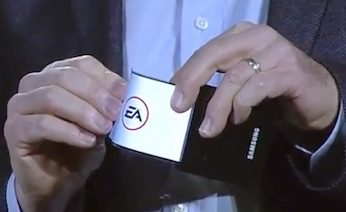 Samsung, as promised, used its time on stage at the 2013 Consumer Electronics Show to show off bendable-screen technology that’s being developed with future smartphones, tablets and more in mind.

The displays will be marketed under a new brand called “Youm,” which “doesn’t just bend the rules of display technologies,” a delighted Stephen Woo, president of Samsung Device Solutions, told the audience during the show’s final major keynote. “It completely rewrites them.”

Brian Berkeley, senior vice president of the Samsung San Jose Display Lab, showed off two Youm products. The first was a seemingly hard little square, out of which came a thin, bendable piece of plastic—roughly the size of a smartphone display—that acted as a crisp, bright screen on which advertising was running.

The plastic moved like a thick photo negative, bending one way and the other and capable of being rolled up, but not designed to be bent.

Organic light-emitting diode (OLED) displays compete with liquid crystal displays (LCDs). OLEDs, said Berkeley, deliver a superior image quality, with “much deeper blacks and more vivid colors.” They’re also super-thin and lightweight, he explained, and because they produce their own light, they don’t need a backlight, which adds weight and depth to a device.

“Now, they can be flexible, as well,” said Berkeley, adding, “Our team was able to make a high-resolution display on extremely thin plastic, instead of glass, so it won’t break, even if it’s dropped.”

Berkeley returned the first device to a large display area on the stage and then—smiling and pausing for a moment, like a knowing, tech-world Neil Armstrong about to take a leap for mankind—pulled from his pocket a small, tablet-like device, which featured a screen that wrapped around the side of the device.

“With this bended display, we have expanded the canvas available for content. Content can now flow along the sides of the device,” said Berkeley. “If I receive an important message, I can see it come through while the device is flat on the table in front of me. … It opens up new lifestyle possibilities … and will allow our partners to create a whole new ecosystem of devices with blended, foldable and rollable screens.”

Woo then cued a playful short film in which Samsung offered ideas about products that might emerge from the technology. One device looked similar to the Samsung Galaxy S III smartphone—and could indeed be used as a phone—but was actually something of a sandwich that, when opened and set down flat, became a tablet with twice the viewing area of the smartphone.

A second device resembled a thin digital recorder—or even the Nokia “lipstick phone,” for those with long memories. When it rang, its fashionable young owner touched a button that sent a large, thin display—much like the one Berkeley showed off, but bigger—shooting out the side.

The devices won each of their owners—the second replacing the first at a busy cafe table—the attentions of a pretty patron sitting close by.

Nokia and Apple have also been connected to reports of flexible screens. Whichever company can bring one to market first is likely to win more than the girl.