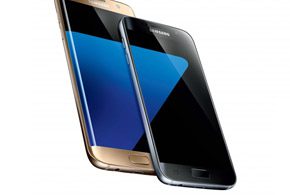 The 6 trillion won profit estimate is notable because it is higher than the 5.5 trillion won forecast by analysts surveyed by FactSet, according to an April 7 Associated Press report.

Samsung’s first-quarter improved performance that led to the upbeat forecast could be the result of higher sales due to the company’s latest Galaxy S7 and S7 Edge flagship smartphones (pictured), which went on sale in March.

The latest Galaxy S7 Edge and S7 handsets are water-resistant and are powered by Qualcomm quad-core 2.15GHz/1.6GHz processors for U.S. users and include 4GB of LPDDR4 memory, 32GB of built-in storage, microSD expansion slots, a 12-megapixel dual-pixel rear camera and a 5-megapixel front-facing camera. The Galaxy S7 Edge features a 5.5-inch quad-HD Super AMOLED display and a screen that wraps around both right and left edges of the device, while the Galaxy S7 has a 5.1-inch quad-HD Super AMOLED display.

Additional details of the company’s first-quarter performance will come later this month when Samsung holds its earnings call.

Samsung’s fourth-quarter 2015 revenue, reported in late January, was up slightly, while its operating profit was down from the prior quarter as the global electronics company continued its pattern of sluggish sales over the last several quarters.