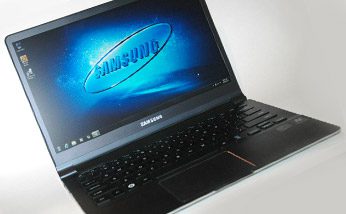 Samsung bills its new Series 9 Ultrabook computer as being as good as any notebook computer out there, while also being visually stunning, blazingly fast and more useful.

While it’s a very nice computer, Samsung made some compromises either to meet its physical design goals or to make it really thin, and those compromises may impact how you use your computer.

The Samsung Series 9 is a very thin notebook and it’s really light. The company says the device is a half inch thick and that it weighs 2.55 pounds. The company also says the LED-backlit screen is at least twice as bright as ordinary laptops. These facts should be accompanied with an asterisk, because they’re both overly broad or are only true in some circumstances.

The version of the Series 9 we received for testing is technically the NP900X3C-A04US. This means it comes with an Intel Core i7-3517U processor, 4GB of memory that’s shared for video, a 128GB solid state drive, built in WiFi that supports 2.4 and 5 GHz. It also comes with a dongle for use with wired Gigabit Ethernet. You can get dongles for VGA and HDMI as options. Samsung claims that the battery life is up to 9 hours. Windows 7 Professional is pre-loaded.

Overall, this seems to be a pretty nice computer. It’s attractive with its metallic cover that looks like titanium, the screen is large enough to be useful, and you have actual keys for typing—something that normally isn’t included with the tablet computers with which the Series 9 competes. But then you start to run into the consequences of Samsung’s choices that were required to make this ultrabook thin and stylish.

The biggest single (and most annoying) compromise is that the touchpad lacks any means of performing a right-click. Were the right-click action only rarely used with Windows 7, this might not matter. But it’s an important part of how you control Windows 7 and not having it available is a real problem. Fortunately, you kind of get a solution that requires multiple steps. Here’s how it goes:

To achieve a right-click in Windows, either within the Desktop or within an application, first you position the mouse pointer over the place you want to right click. If you’re opening up the video menu, you put the pointer over an empty part of the screen. Then you click the touchpad once. Then you put one finger on the Fn key, and while you’re doing that you press the right-side Control key (which has a tiny image of a right click menu) and that usually produces the menu. This is far too many steps for a fairly common action in Windows.

You can do the same action for scrolling. The touchpad features multi-touch gestures that work in some applications. For example, if you open a large image in the Windows photo viewer, you can use the pinch or spread motion with your fingers to zoom in or out of the image.

When I investigated some other claims, I got results that weren’t necessarily in accord with Samsung’s statements. For example, when I weighed the device, the 2.55 pounds was accurate only if you don’t include with power cable and power supply. The total weighs slightly over 3 pounds, which is what’s going to be in your briefcase when you travel.

Samsung claims that it has speedy WiFi which it does, but considering that its antenna only uses two spatial streams the most it could ever handle under ideal conditions is 300 megabits per second. I compared the Series 9 against a Lenovo T-410 equipped with antennas and radios that support three spatial streams, and the Lenovo was indeed faster, although not by a huge amount. It’s worth noting that these speeds are only useful on internal networks since you’re unlikely to find an internet connection fast enough for this to matter.

Samsung’s screen brightness claims are not bogus, but the Series 9 isn’t noticeably brighter than other laptops. The default setting is actually pretty dim, but when I went into the settings and cranked up the brightness all the way, it was as bright, but did not appear to be any brighter than the previously mentioned Lenovo, which also has an LED backlight.

My overall impression of the Series 9 is that it’s a nice, very portable Windows 7 machine. It’s not as easy to use as it might be because of the flat keyboard and the issues with right-clicking, but even at its full 3 pound weight it won’t be a chore to carry. The solid state drive boots and operates very quickly, and the high-resolution (1600 x 900) screen, while not full HD, will display high-definition content that looks fine.

This isn’t a cheap computer at $1,399. For that you could buy a slightly thicker laptop that would probably have a better keyboard and more features, but it would weigh more. Or you could buy a couple of iPads or a couple of Microsoft Surface tablets complete with that touch-sensitive keypad cover and Windows 8. Whether it’s worth the cost considering the compromises depends a lot on how the extra half pound or so of weight matters to you and how snazzy you want it to be. But be aware that there’s a price for all of that design and it’s measured in more than dollars.