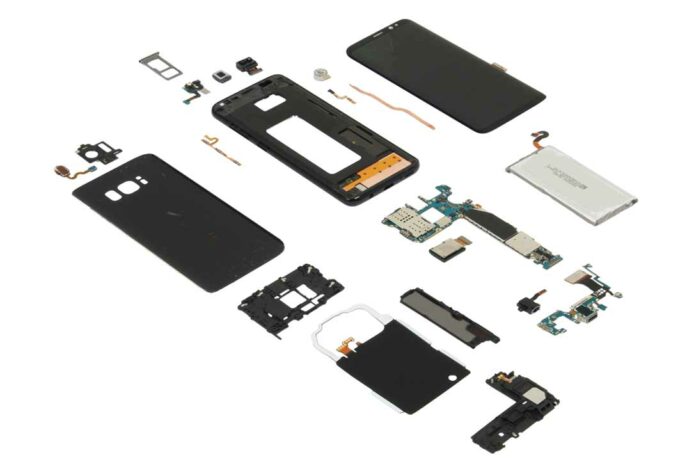 Samsung has packed its latest Galaxy S8 smartphone with components costing $43.34 more than those inside its last standard flagship phone, the Galaxy S7, as it continues to add features to attract more buyers.

The parts tally for the new Galaxy S8 was revealed through a recent device teardown and report by research firm IHS Markit, which determined that the total parts list in the S8 adds up to $301.60, while manufacturing costs add another $5.90 per phone, according to the April 20 report.

That $307.50 in total parts and manufacturing costs is $43.34 higher than the parts and manufacturing costs for last year’s Galaxy S7 handset, and $46.29 higher than last year’s Galaxy S7 Edge phone, which had a larger and curved display, the report states. The retail unsubsidized price for a new 64GB Galaxy S8 phone starts at $720. IHS has not yet conducted a teardown analysis on the parts inside Samsung’s new, larger S8+ phablet. Samsung’s latest Galaxy S8 features 4GB of RAM and built-in storage of 64GB, which is twice the built-in storage found in the former Galaxy S7.

Wayne Lam, principal analyst of smartphone electronics for IHS Markit, told eWEEK that the parts value in the latest Samsung S-Series phone line continues a pattern his company has seen since the start—with each iteration increasing the value of parts inside the devices.

“It’s clearly a strategy by Samsung to pack in all the features and innovations it can into one product,” said Lam. That’s the opposite strategy of major competitor Apple, which has continued to maintain a base iPhone with similar features, parts costs and retail prices throughout the iPhone 5 through iPhone 7 models, he said. “Apple has higher models that cost more but there is always a base model. What you are seeing is Samsung is shifting the market” by replacing its base model Galaxy S phones with higher-priced models that have an increasing number of features for buyers, he added. “With the Galaxy S8, there is no flat screen model anymore” from Samsung.

The company is “trying to almost intentionally put more daylight between themselves and the rest of the market” by including larger displays and more features “and are trying to lead in that area,” said Lam.

Samsung is essentially telling buyers that if they want large, quality displays and other features that this is the cost of entry, he added. “I think this is very telling. They have tested this in the market.”

At the same time, this is good timing for Samsung as the company continues to work to again earn the trust of consumers after last fall’s Note7 smartphone disaster, when the company was forced to recall all of its 2.5 million Note7 smartphones after hundreds of reports of battery fires and explosions around the world.

“They have a five or six month runway before [the release of] the next iPhone, so they can really capture the attention of the marketplace” with the new S8 handsets, added Lam.

“I think they led with their best foot forward, with the stretched-out display” and thinner devices, as well as other changes.

Other features are not as stirring, including the position of the new fingerprint sensor, which is on the back side of the handset, right next to the camera lens, which has received criticism from reviewers and users. Samsung also removed the physical home button from the front of the device and replaced it with a virtual button under the front glass, which is very different from past Galaxy models and will take getting used to by users, he said.

“They didn’t get everything right,” but the company will make updates later to fix those issues over time, said Lam. “Samsung kind of threw down the gauntlet here and we’ll see what Apple does [with its new phones] in September.”