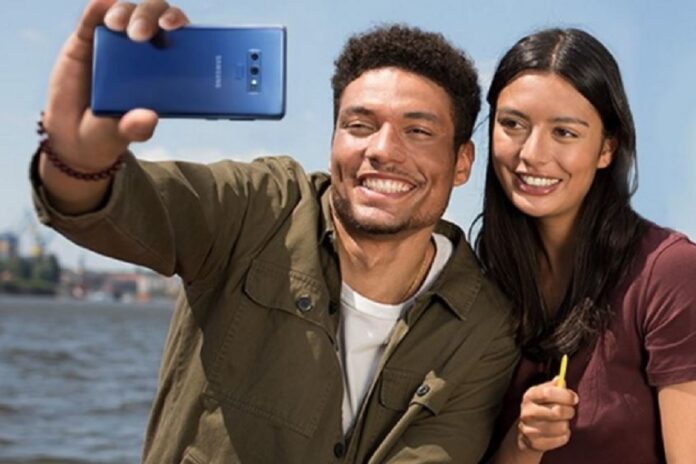 NEW YORK—Samsung unveiled the latest version of its flagship enterprise smartphone, the stylus-equipped, big-screen Galaxy Note 9, at a media event here on Aug. 9, adding a larger screen and additional refinements in a device that has gained a loyal following among business and professional users.

The big news for Samsung’s latest Note phablet is its increased display size, now 6.4 inches compared to 6.3 inches for the previous Note 8, as well as a bump in onboard memory for Note 9 models to a maximum of 512GB of internal storage, up from the 64GB, 128GB or 256GB for the older Note 8.

Samsung also upgraded the integrated S Pen stylus, which gains Bluetooth Low-Energy connectivity to add a wider range of on-screen presentation and creativity capabilities, and a larger, more powerful 4,000mAh battery, which promises all-day battery life compared to the 3,300mAh that was standard in the Note 8.

The 6.4-inch display on the Note 9 is another Super AMOLED Quad HD+ model, with 2960 x 1440 resolution and 551 ppi, while the updated rear camera now adds dual aperture lenses to the previous dual 12-megapixel camera configuration. The Note 9 gets the same 8-megapixel front camera that was included in the Note 8.

The Note 9 also features a more powerful 64-bit octa-core processor along with 6GB of LPDDR4 memory for the 128GB model, and 8GB of memory for the 512GB model. Also included are faster LTE wireless network connectivity and a new Intelligent Scan feature that lets users unlock the device using both its iris and facial scanning. The Note 9 also features existing iris, fingerprint and facial recognition authentication methods.

The new Note 9 also meets the same IP68 water resistance standards as the earlier Note 8 model and now runs on Android 8.1, compared to the Note 8’s Android 7.1 operating system. It can also be connected to an external desktop monitor using an optional HDMI connector and the Note 9’s Samsung DeX desktop feature, which allows users to do their work on a larger screen.

The 512GB Galaxy Note 9 will be available at select retail locations starting Aug. 24 and online from AT&T, T-Mobile, Verizon, U.S. Cellular and Samsung.com.

Several IT analysts said the improvements were impressive, but their views differed on whether that would induce current Note 8 users to quickly upgrade to the latest model.

Avi Greengart, a mobile device analyst with GlobalData, told eWEEK that Samsung delivered some valuable improvements in the Galaxy Note 9, such as a more powerful battery and larger internal storage capacities, but that they will likely not be enough to convince most current Note 8 users to upgrade to the new Note 9.

“What will be incredibly enticing is the larger battery,” which addresses a serious need with the previous model, he said. But overall, for customers, the new Note 9, even with its upgrades, is not dramatically improved even compared to the Note 8 or to the company’s Galaxy S9+ smartphone which came out earlier in 2018, he added.

“Basically, Samsung is betting that if you want the biggest phone with the most features that you’ll be willing to pay more to get a Note 9,” said Greengart. “But if you already have a Note 8, this is just an iterative upgrade.”

Patrick Moorhead of Moor Insights & Strategy, said that the upgrades in the Note 9 will help the Note 9 stand out even more in the business smartphone market.

“The new Note9 is very differentiated versus any other premium smartphone out there with its new active S Pen, DeX desktop capabilities, top-rated display, battery size, top-rated camera and huge storage,” said Moorhead. “Samsung will now need to do some flawless marketing to get those points across to consumers. For businesses, there is no better phone out there.”

Tuong Nguyen, an analyst with Gartner, said that with the Note 9, it’s not all about features for users. “When you’re talking about this highest price tier for the phone, I don’t think the difference in specifications plays as significant a role as for more mainstream devices. It’s typically targeting a different demographic, such as techie buyers, Samsung enthusiasts and early adopters.”

In those cases, the incremental gains in battery size, storage and the new S Pen functionality should all please those heavily-invested users, said Nguyen.