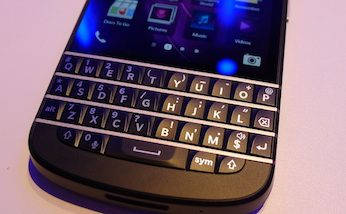 The BlackBerry faithful love a dedicated QWERTY keyboard, which has made the delayed BlackBerry Q10 the final card BlackBerry has to play in its gamble to reinvent itself as a company that can compete with Apple and Samsung in the bring your own device world.

U.K. retailer Selfridges & Co. became the first seller of the BlackBerry Q10 Friday, April 26, and sales were nothing short of spectacular, according to Seeking Alpha contributor Michael Collins.

“They were bringing phones up in baskets, hundreds at a time,” Collins wrote in an April 26 blog post. “At 3 p.m., without phones left, they still had lines in the multi-buyer section and individual buyers’ section. People were just trying to secure stock for tomorrow.”

When asked how the Q10 launch compared with the BlackBerry Z10 launch, a manager “giggled, rolling her eyes and raising her arm in the air skyward, saying it was ‘leagues beyond anything they had seen.'”

The Z10 became available in the U.K. Jan. 31—a day after BlackBerry CEO Thortsen Heins and key executives introduced both phones and the company’s new BlackBerry 10 operating system at a globally streamed kickoff event in New York.

Heins commented on the Z10’s early sales in a Feb. 6 statement, saying, “In the U.K., we have seen close to three times our best performance ever for the first week of sales for a BlackBerry smartphone.”

The Z10 didn’t become available in the United States until March 22, after which BlackBerry remained quiet about how it had performed.

During its March 28 earnings announcement for its quarter that closed March 2, the company announced that it had shipped 1 million Z10 units globally and sold roughly three-quarters of them.

Heins said during the call that the Q10 was in testing with more than 40 carriers in 20 countries and that BlackBerry had very high hopes for it.

“Certainly, enterprises are extremely hot on getting the Q10 because there’s a huge segment of diehard QWERTY lovers out there, and we’re looking forward to serve that segment strongly with the Q10 product,” he added.

According to Yahoo, Selfridges head of Home and Leisure, Julian Slim, said in a statement, “The BlackBerry Q10 has been, without a doubt, the most highly anticipated smartphone we have ever sold and is already our most successful.”

Yahoo also quoted Rob Orr, BlackBerry U.K. managing director, as saying, “The BlackBerry Q10 represents the next chapter in the BlackBerry 10 story, and we are delighted that it has been so well-received.”