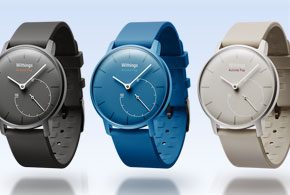 Smartwatch buyers have another new model to consider for purchase with the announcement of a lower cost, $149.95 device from Withings, which makes a range of health-related smart devices.

The new Withings Activité Pop smartwatch, which will be available in limited quantities starting Jan. 5 through BestBuy.com, sells for one-third the cost of the company’s luxury device, the $450 Activité model. The company unveiled the new device in a Jan. 4 announcement and will show it off during this week’s Consumer Electronics Show (CES) in Las Vegas.

The Activité Pop smartwatch can be used by wearers to track their physical activities, such as walking, running and swimming, while also tracking their sleep and more, according to the company. The new device uses a small battery that provides eight months of power, so it doesn’t require frequent recharging like other smartwatches. It also includes a silent alarm that can wake up its wearer using vibration and Bluetooth 4.0 connectivity.

The watch face includes two dials—a time dial and an activity dial—so that users can track their activities more easily, according to Withings. Unlike its more expensive cousin, the Pop model includes a lightweight design that uses a PVD-coated watch case and a smooth silicone watch strap. The Pop model comes in three colors—Shark Grey, Bright Azure (medium blue) or Wild Sand (tan).

The Pop model also includes Withings’ Health Mate app, which gives users opportunities to earn activity badges for their fitness accomplishments, while also providing a leaderboard so users can compete with friends as they plot their fitness goals.

“We’ve paired Activité elegant Parisian design with fun-to-wear materials and pop colors in order to create a very personal device that people would want to wear and never take off,” Cédric Hutchings, the CEO of Withings, said in a statement. “It is time wearables step up to what they claim to be.”

The first Activité Pop devices will only support iOS users, while an Android-compatible version will follow in the future, according to the company. No timeline has been announced for the Android release.

Withings hopes that the new device will help users buy a smartwatch and then continue to use it in the long term, Hutchings said.

“The activity tracker category has a huge problem with abandonment, and so consumers

don’t really get to see the benefit of long-term data and the impact it can have on their health,” he said. “Activité Pop’s fashion-forward styling, price point, and ease of use combine for the most accessible activity tracker that we’ve ever seen.”

Widespread distribution of the new smartwatch will be available starting in March in Best Buy stores and on the Best Buy Website.

The company unveiled its original luxury Activité smartwatch in July 2014, according to an earlier eWEEK report. The original Activité has high style, with a watchcase made of stainless steel 316L and a crystal of sapphire glass that includes touch-screen capabilities to tap between modes.

The original watch features no buttons, instead responding to simple taps to change between modes. Powered by standard watch batteries that last a year, the device also is water (5ATM) resistant, meaning users can wear it in the shower or while swimming in a pool. The original watch comes in black and silver finishes.