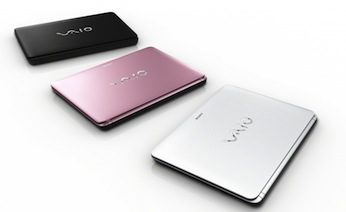 Sony has introduced Vaio Fit, a new line of entry-level laptops that continues a new naming strategy for the company—its Windows 8-running devices include the Tap and the Duo—which has previously been partial to letters.

Lest anyone think the letters are a thing of the past, Sony also announced updates to its T Series 15 Ultrabook, L Series PCs and all-in-one Tap 20.

“We built the brand-new Vaio Fit line from many of the same features as our amazingly thin and powerful ultra-premium models but at an entry-level price point,” Pedro LaFargo, senior vice president of Sony’s Vaio and Networked Products Division, said in a May 7 statement.

Designed for students and mobile professionals who want a “premium” design, the Fit line is optimized for Windows 8 and features “innovative digital imaging” informed by Sony’s sound and television divisions, LaFargo added.

For example, the Fit line features high-resolution displays—a 1920 by 1080 full-HD display on the Fit 15 and a 1600 by 900 HD+ on the Fit 14. Both notebooks feature full-size, backlit keyboards, [and] are made of aluminum and accented with “Sony’s signature sparkling diamond-cut Vaio logo.”

Capacitive touch-screens are an option, and so are optical drives—including Blu-ray Disc drives—and Nvidia GT 740M GPUs in 1GB and 2GB options. Users can also choose between Intel Core i3, i5 and i7 Ivy Bridge processors, and hybrid hard drives and solid-state drives.

Built in are Exmor R CMOS sensors for visually clear Web-conferencing, even in low light, along with ClearAudio+ sound technology to complement “big-box speakers” and a subwoofer.

Sony’s Rapid Wake technology is also on board, as is near-field communication technology, enabling users to swap information with other devices (like a Samsung Galaxy S III) by tapping the two together.

The Fit E 14E and Fit 15E—the distinction seems to be that the E’s are made of plastic, while the others are made of aluminum—will be priced at $549 and $579 in black, pink and white.

As for the announced upgrades, the Vaio Tap 20 now includes the Sony Imagination Studio and Intel Wireless Display (WiDi), which lets users stream their computer’s screen content to a compatible HDTV.

The Sony Vaio L Series now features an X-Reality chip, which Sony says makes for “amazing picture quality.” It’s an all-in-one PC/TV with intuitive touch access to the Internet, movies, music and photos, and a TV Tuner allows for picture-in-picture functionality, so users can watch TV while addressing other tasks.

Lastly, the Vaio T Series 15 is being offered into the summer and features Intel third-generation processors and hybrid hard drive options. It’s ideal for students and professionals, said Sony, “who demand speed at all times.”