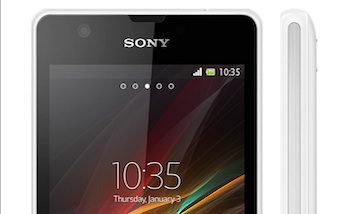 Electronics manufacturer Sony has been steadily launching its line of Xperia smartphones and tablets since the year began, and many of them have water-resistant designs, but with the launch of the Xperia ZR, the company is taking the technology to new heights–or depths, so to say.

Combined with its dedicated camera key, the waterproof capabilities let users shoot videos in full HD or snap pictures underwater. The phone is also dust-resistant and the camera key allows users to shoot even from a locked screen. Featuring Sony’s “Exmor RS for mobile” image sensor with HDR (High Dynamic Range), when users want to capture action fast, they can just turn on burst mode to shoot an unlimited number of images at 15 frames per second.

The handset also features Battery Stamina Mode which can help improve the standby time of the smartphone by four times or more by automatically shutting down battery-draining apps whenever the screen is off and starting them up again when the screen is back on.

The display is powered by the company’s Mobile Bravia Engine 2 using the contrast enhancement technology expertise from Sony’s range of Bravia TVs, which is combined with the OptiContrast panel that helps reduce reflections and provides clearer viewing, even in bright sunlight, and creates a seamlessly black surface when the phone is turned off.

“The Xperia ZR pushes the boundaries on where and how consumers can use the full potential of their smartphone. By combining Sony’s leading camera technology with the highest level of water-resistance, you will never miss another moment.” Calum MacDougall, director of Xperia marketing at Sony Mobile Communications, said in a statement. “Bringing together the best of Sony’s leading technology, media applications and easy one-touch connectivity with the largest ever range of NFC-enabled accessories, the Xperia ZR delivers the unique smartphone experience that people can expect from Sony.”

Available in four colors–black, white, pink and mint—the handset also comes with the Walkman, Album and Movies applications for discovery of online and offline content through a single access point. The Walkman application provides access to all of a user’s downloaded music, and boasts a library of more than 20 million songs to explore from Music Unlimited, as well as Facebook social integration.

The Movies application provides access to more than 150,000 movies and TV series from Video Unlimited. The Album application enables access to Facebook friends’ photos and browsing photos by location. A new feature of this app is “Faces” which recognizes and sorts the faces in your photo album so users can tag existing contacts or add names to familiar faces.