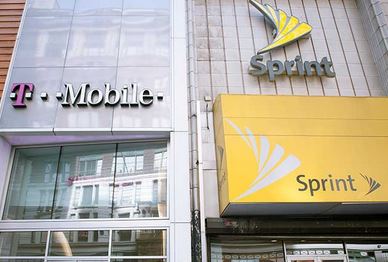 Sprint is again promoting the possibility of a merger with rival T-Mobile U.S., after raising the issue two years ago when potential merger discussions broke off following criticisms by U.S. regulators.

The latest merger interest between the two telecoms was raised by Masayoshi Son, the chairman of Sprint’s parent company, SoftBank Group, in a discussion with reporters in Tokyo on May 10, according to a report by Bloomberg.

Stocks for both companies rose in response to the news “as investors bet a deal may finally happen under the Trump administration’s looser regulatory climate,” reported Bloomberg. Son told reporters that he believes a merger of Sprint with T-Mobile is critical to making both companies more competitive in a U.S. wireless business dominated by Verizon Communications and AT&T.

Son had considered a purchase of T-Mobile in the past, but that plan was scuttled when regulators with the U.S. Federal Communications Commission and Justice Department voiced their opposition to such a deal. With the new administration in office, however, Son says he now sees an opening for his merger plans.

“Basically anything is possible,” Son told reporters in his comments, according to Bloomberg. “But I think the No. 1 favorite, the quickest route to synergy, is the option that we pursued from the start: T-Mobile. However, it’s also up to the other side and whatever conditions they may have. Therefore, if there are other opportunities for industry consolidation that offer better conditions, of course we want to consider them with an open mind.”

Sprint, which has been losing money each quarter for more than a decade, was the subject of rumors involving a merger with T-Mobile back in mid-2014, but by August 2014 the rumors were apparently dashed, according to an earlier eWEEK story. The idea of such a move was that the two companies could join together and fight harder to compete with mobile powers Verizon Wireless and AT&T. Neither Sprint nor T-Mobile ever commented publicly about the rumors at the time.

In December 2014, a second round of merger rumors began and then were quickly denied by anonymous sources.

Spokespeople for Sprint and T-Mobile declined to comment to eWEEK about the latest report on a potential merger.

Time May Have Passed for Future Merger

A sampling of several IT industry analysts, asked about the renewed possibilities for a merger between Sprint and T-Mobile, said such a plan is again far from being certain.

“SoftBank has made it clear it is interested in renewing discussion of a possible merger of T-Mobile with Sprint,” said Bill Menezes, a unified communications analyst with Gartner Research. “Remember, this occurred a couple of years ago and they backed away in the face of potential regulatory resistance. Apparently, SoftBank believes the regulatory environment has changed and is likely to wave such a combination through.”

Yet while such a merger could certainly help Sprint, “a SoftBank tie-up also would provide T-Mobile with additional resources to push development of its self-proclaimed mobile 5G strategy,” said Menezes. “Clearly T-Mobile—and its ostensible new owner SoftBank—see a big opportunity to differentiate themselves from AT&T and Verizon in the U.S. by positioning their services as mobile 5G, versus the fixed 5G ‘cable replacement’ use cases the big two have been talking about as their initial 5G product.”

Charles King, principal analyst with Pund-IT, told eWEEK that the mobile carrier landscape has changed quite a bit since 2014 when Sprint first proposed such a merger.

“At that time, Sprint was in the stronger position and T-Mobile was just beginning its ‘Un-carrier’ promotion. Some also assumed that Sprint’s acquisition by SoftBank would provide the deep pockets and investment it needed to spark substantial growth.”

But instead, since that time T-Mobile handily moved into third place among the top 4 U.S. mobile telecoms and continues to grow share while Sprint has become the industry’s laggard, said King.

“Not surprisingly, the SoftBank proposal appears to acknowledge that it is dealing from a position of weakness,” King said.

Jan Dawson, the chief analyst with Jackdaw Research, called the latest merger report “the least surprising announcement you can imagine.”

Both companies were prohibited from talking about merger possibilities during the recent FCC 600MHz spectrum auction, but it was always expected that when the quiet period was over, the companies would start talking again, said Dawson. Yet, the talks may not interest T-Mobile anymore, he added.

“T-Mobile is in a much stronger position this time around than last time around and may well not want to merge, given its current strength, so there’s no guarantee a deal goes ahead,” Dawson said.

Analyst Rob Enderle, principal of Enderle Group, said the latest merger possibilities aren’t a bad idea for Sprint, given that “T-Mobile is surging and by merging with Sprint would be able to both cut expansion costs and dramatically increase their customer base.”

However, the problem with that idea, Enderle said, is that T-Mobile is more successful in the marketplace lately and “were Sprint’s leadership to prevail in the merger, the T-Mobile growth would likely stall.”

Ultimately, mergers are tough, particularly at this scale, and few companies do them well, said Enderle.

“There are favorable conditions here because both firms likely agree they need this scale … but leadership, which should favor T-Mobile over Sprint, merger process, and execution will be key to a successful result. Unless they take an unusual approach, those factors will work against the success of this effort.”