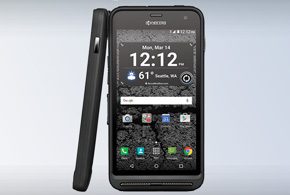 Kyocera’s latest ruggedized smartphone, the DuraForce XD, will go on sale through T-Mobile starting May 11 for $449.99, making it the first rugged handset being offered by the carrier.

The DuraForce XD is a 4G LTE smartphone that features a 5.7-inch HD, In-Plane Switching (IPS), impact-resistant touch-screen display (1,280 by 720 pixels); a Qualcomm Snapdragon quad-core 1.6GHz MSM8928 processor; 2GB of memory; 16GB of onboard storage; and a microSD memory card slot that supports cards up to 64GB. The phone runs on the Android 5.1 Lollipop operating system.

In addition, the ruggedized phone is certified to meet Military Standard 810G for resistance to dust, drops, shocks, vibration, temperatures, moisture, atmospheric pressure, altitude, solar radiation, salt, fog, humidity and water immersion, according to Kyocera. The handset also meets IP68 standards for dustproof performance and the ability to withstand full submersion in water up to 6 feet deep for up to 30 minutes. The touch-screen display of the DuraForce XD is designed to be operated by a user with wet hands or while wearing gloves.

The phone also meets OSHA standards for use in hazardous work locations where flammable gases, vapors or mists are not normally present in an explosive concentration, but where they could accidentally materialize (Non-incendive, Class I, Division 2, Groups A-D, T4 standards), according to the handset maker.

“Kyocera is thrilled to help T-Mobile introduce its first ruggedized device to its mobile portfolio with the launch of the DuraForce XD,” Chuck Becher, vice president and general manager of sales and marketing for Kyocera Communications, said in a statement. “As a leader in rugged mobile devices, Kyocera prioritizes usable durability at an incredible price. With the new DuraForce XD, T-Mobile customers will benefit from enhanced productivity with a large-display format, as well as cost-savings.”

Kyocera makes a wide range of ruggedized and waterproof smartphones for business and consumer users.

In February 2015, Verizon began selling Kyocera’s DuraXV ruggedized flip phone, which offered customers a well-built handset without all the features and bells and whistles of a typical, larger and more expensive smartphone. The DuraXV, which was built for extreme environmental conditions, was certified to meet Military Standard 810G and IP68 to resist dust, shock and extreme temperatures, while also surviving water immersion for up to 30 minutes in up to 6 feet of water.