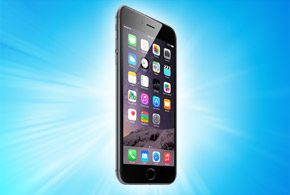 The new iPhone 6 and iPhone 6 Plus smartphones went on sale officially today as lines of devoted Apple fans snaked into stores to pick up their long-awaited new phones. For millions of others who are on waiting lists to get their phones, the waiting continues.

At an Apple store in Lancaster, Pa., an employee told eWEEK that the store was busy all morning but that as of 11 a.m. ET it was still possible to find a new iPhone model in the store, though the “inventory is constantly changing rapidly.”

The store is having customers who come in for a new iPhone check with an Apple employee on arrival, and if an iPhone 6 that they seek is available they are given a reservation pass that lets the customer reserve a phone and a place in line until a salesperson is available to complete the transaction. The customer is then sent a text message notifying him or her to pick up the new phone. Customers have to be at the location in person to use the reservation service, the employee said.

Elsewhere, iPhone customers were flocking to other stores as well, including at an Apple store on Fifth Avenue in New York, where police put up barricades to help control a line of customers that stretched for some 10 blocks, according to a story by Bloomberg BusinessWeek.

Customers were also buying their new devices in central Paris this morning, as hundreds of people gathered outside an Apple store in a line that stretched around the French capital’s 19th century opera house, according to BusinessWeek. Similar crowds were present in London, where more than 1,000 people had lined up at Apple’s Regent Street store to try to get one of the new devices. The same scenarios were happening in Australia, Hong Kong and many other cities and countries around the world where the devices have gone on sale.

The frenzy was certainly in full force around the world. In Perth, Australia, one young iPhone 6 buyer was interviewed by a television reporter as he left the store with his new phone and dropped his brand new phone to the concrete as he hurriedly tried to open the box to show it off live on television, according to a report by WAAY-TV in Alabama. The new iPhone didn’t appear to be damaged, based on the video.

Preorders for the new iPhones have reached huge levels, with more than 4 million devices preordered within 24 hours of the process opening on Sept. 12, just seven days before the official device launch date, according to an earlier eWEEK report. That high demand quickly led the company to advise customers that many devices won’t be delivered until October due to short initial supplies.

As the devices hit retail sales floors today, customers could search for their new phones at their local Apple store, from authorized Apple resellers such as Target and Walmart, or from stores run by mobile carriers such as AT&T, Sprint, T-Mobile and Verizon Wireless.

The new iPhones include the iPhone 6 with its 4.7-inch Retina HD display and an even larger iPhone 6 Plus with its 5.5-inch Retina HD screen, according to a recent eWEEK report. The new devices—which come in 16GB, 64GB and 128GB storage capacities—will also come with many other new features and capabilities, making them popular before they ever hit store shelves.

The new phones also include an Apple-designed A8 chip with second-generation 64-bit desktop-class architecture, enhanced iSight and FaceTime HD cameras, and the latest iOS 8 operating system. A new, built-in Apple Pay secure payments system will be added to iOS 8 as an update in October, according to the company.

Also this week, Apple released its new iOS 8 device operating system with new features and capabilities for Apple devices, according to an earlier eWEEK report.