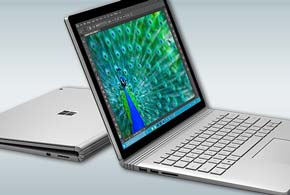 Microsoft announced Jan. 22 that it has started selling 1TB versions of its Surface Book two-in-one laptop and Surface Pro 4 tablet in the United States and Canada.

Apart from the added storage capacity—up from 512GB—both feature a sixth-generation Intel Core i7 “Skylake” processor and 16GB of system memory. On the Surface Book Pro, the 1TB model ships with a discrete graphical processing unit (GPU) in the keyboard portion of the device.

When Microsoft announced the Surface Book during October’s Windows 10 device event in New York City, the company not only surprised attendees by unveiling its first laptop, but also by revealing that select models would ship with additional hardware-based graphics acceleration. Supplementing the standard Intel HD 520 graphics and housed in the device’s base, an optional Nvidia GeForce GPU with 1GB of GDDR5 memory improves performance in 3D and graphically intense workloads.

Also making its debut is the gold version of the Surface Pen, joining the silver, black and dark blue versions of the $60 stylus.

“When used with your Surface Book or Surface Pro 4, it offers 1024 levels of pressure sensitivity for the ultimate writing and drawing experience,” said the Microsoft Devices team. “The gold Surface Pen also includes the Surface Pen Tip Kit so you can further customize the experience of taking notes or drawing on your Surface.”

Meanwhile, Microsoft is recalling some Surface Pro power cords sold last year over concerns that they can cause a fire. “Today, in consultation with safety regulators, we announced a voluntary replacement program for all Surface Pro AC power cords sold before March 15, 2015, in the U.S. and Canada and before July 15, 2015, in other markets where Surface is sold,” said the Microsoft Devices group in a separate, Jan. 21 advisory.

“If the cord is wound too tightly, twisted or pinched over an extended period of time there is a potential risk for the AC cord—the cord that connects the power supply unit to the electrical socket—to overheat,” cautioned Microsoft. There have been no reports of serious injury due to the faulty cords, according to the company.

“If you bought a Surface Pro, Surface Pro 2 or Surface Pro 3 in the above timeframe, we recommend you get a free replacement AC power cord from Microsoft as soon as possible,” stated the company. Affected Surface Pro owners can request the cord online at surface.com/powercord.