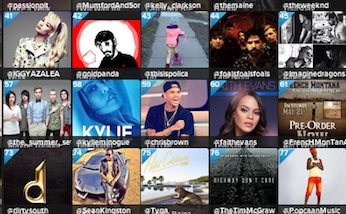 “It uses Twitter activity, including Tweets and engagement, to detect and surface the most popular tracks and emerging artists,” Twitter explained in an April 18 blog post.

The service offers an inviting grid of artists. Click on any box to hear a sample of a song. You can listen from the grid, or click the artist’s name to see their avatar, follow them, see their top song or see the artists they follow—and then listen to or follow them as well.

Songs can be found through five easily switched-between avenues. As stated by Twitter these are: Popular (new music trending on Twitter), Emerging (hidden talent found in the tweets), Suggested (new music you might like), #Now Playing (tweeted by people you know) and Me (artists you follow).

The service is available online or through an app that can be downloaded to any iOS device. The music suggestions come by default from iTunes, but subscribers to Rdio and Spotify can log into their accounts to not only receive recommendations through these sources but to listen to full tracks instead of excerpts.

Twitter says it will continue to “explore and add other music service providers.”

The service seems to be a tremendous win for Apple—and not least because an Android app isn’t yet available for the service, despite Android being the leading mobile platform.

NPD Group reported April 17 that Apple’s iTunes leads the industry, and by a significant margin, in digital music downloads. And while it’s believed that streaming sites compete with iTunes for listeners, NPD found that consumers who listen to streaming sites—where they discover new music—are actually the largest downloaders of music.

Apple is rumored to be working on a streaming music service—nicknamed “iRadio” by the media—which could help to keep music lovers in the Apple orbit and encourage downloads from the iTunes store.

“On one hand, Twitter Music is absolutely great for Apple—it expands the addressable market for iTunes immensely and the current iOS exclusivity builds taller walls around the iOS ecosystem,” Jack Narcotta, an analyst with Technology Business Research, told eWEEK.

“But on the other, it speaks to the issues Apple has had with being a service provider,” Narcotta continued. “iCloud [and] iMessage have had their fair shares of fits, starts and outages over the last two years. And without capability to stream, iTunes is showing its age against Pandora, Spotify, Rdio, I Heart Radio, etc.”

“Unless [it’s] a game changer, and they’ve been focused more on hardware development than software improvements—if Maps and other iOS services are examples,” said Narcotta, “Apple’s streaming service would seem like a ‘me too’ feature for a company that’s not used to being in that role.”