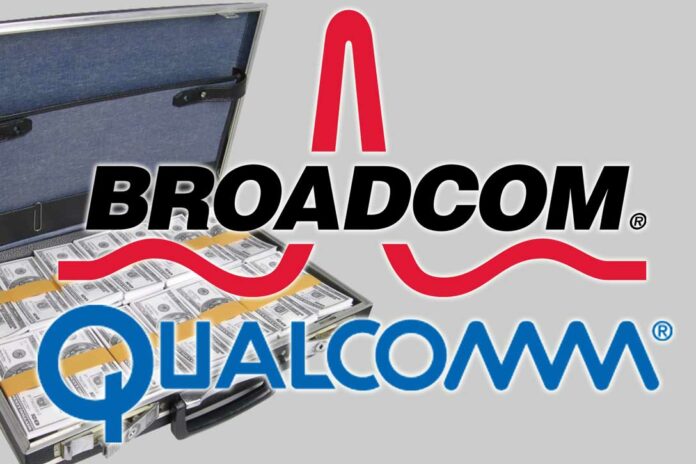 In Broadcom’s increasingly contentious bid to acquire chip-making rival, 5G networking has emerged to become has drawn the attention of regulators and lawmakers overtaking other issues such as the billions that Broadcom is willing to spend on the deal and oversized influence the combined companies would have in the global technology industry.

Broadcom’s buyout bid was of such high concern to lawmakers that they asked federal regulators to review the proposed $117 billion deal—and unusual move considering the two companies haven’t come to terms on a buyout deal.

The lack of an agreement was also an issue raised by the U.S. Treasury Department in a letter to both companies outlining the reasons why the Committee on Foreign Investment in the United States (CFIUS) decided to take up such a review and ordered Qualcomm to delay its scheduled March 6 shareholder meeting for at least 30 days. The meeting is now set for April 5.

Broadcom this week made moves to alleviate those concerns, including making a pledge to create a $1.5 billion innovation fund “to train and educate the next generation of engineers in the U.S.” to “ensure America’s lead in future wireless technology.”

In a March 9 letter to Congress, Broadcom President and CEO Hock Tan reiterated that his company is “steadfast in our support of 5G development” and that “any notion that a combined Broadcom-Qualcomm would slash funding or cede leadership in 5G is completely unfounded. We have a proven track record of investing in and growing core franchises in the companies we acquire. In the case of Qualcomm, this will be 5G cellular.”

Whether such promises will mollify regulators remains to be seen, but it’s become clear that 5G will be a central point in a deal that, if completed, would be the largest in tech industry history.

Broadcom in November 2017 announced an unsolicited $105 billion bid for Qualcomm, the world’s top maker of processors for mobile devices like smartphones and tablets. Qualcomm’s Board of Directors—which this week named Jeffrey Henderson as nonexecutive chairman of its board of directors—has rejected the acquisition attempt, even after Broadcom raised the offer to $121 billion

Broadcom pared that back to $117 billion last month after Qualcomm raised its own price for chip maker NXP to $44 billion. They argued that even the higher price undervalued Qualcomm, noting that their company was extending its reach into such growth markets as the internet of things (IoT), the data center and 5G networking.

A combined company would become the world’s third-largest chip maker, behind Samsung and Intel, but a concern of Qualcomm officials and lawmakers has been that after an acquisition, Broadcom would slash expenses at Qualcomm, including R&D in such areas as 5G.

Broadcom has been aggressive in its acquisitions in recent years since Avago Technologies bought Broadcom for $37 billion in 2015 and assumed the Broadcom corporate name. In its letter to both companies, Aimen Mir, deputy assistant secretary of investment security for the Treasury Department, noted that to finance the Qualcomm acquisition, the company would have to take on $106 billion in debt, which would put pressure on it to achieve short-term profitability at the expense of long-term investment.

In addition, Mir wrote that statements by Broadcom officials indicate the company will take a “private-equity” approach to Qualcomm—reducing long-term investments such as R&D—a pattern that he said would follow Broadcom’s previous acquisitions.

Doing so would weaken Qualcomm’s leadership in 5G innovation and would prove to be a national security threat to the United States, Mir wrote. The job of CFIUS is to review acquisitions of U.S. companies by foreign entities to assess potential national security implications.

The committee’s concern is that a reduction in Qualcomm’s ability to drive 5G innovation would give Chinese companies—particularly Huawei—an advantage. Mir noted that Huawei and other Chinese companies have increased their investments in 5G technology and that Huawei owns about 10 percent of essential 5G patents.

“While the United States remains dominant in the standards-setting space currently, China would likely compete robustly to fill any void left by Qualcomm as the result of a hostile takeover,” Mir wrote.

Rob Enderle, principal analyst with The Enderle Group, told eWEEK that the competition between the United States and China is “very intense. China wants desperately to take the lead in technology from the U.S. and 5G is only one of several areas they are eager to control. Communications likely has precedence, though, because if you can control, or at least monitor all communications, you can better control your citizens and monitor other governments.”

Enderle also said that Broadcom officials have indicated they would “massively cut R&D and likely reduce Qualcomm to a shell,” which should give U.S. regulators pause when considering the deal.

“I think the concerns are valid,” he said in an email. “Recall that Oracle did a hostile takeover of Peoplesoft and promised to do a number of things to get approval and then didn’t once the deal was done. Once they have control, the U.S. government loses much of its leverage to force compliance and Broadcom has to know this.”

5G is the next generation of cellular connectivity and promises significant improvements over current 4G networks in such areas as data capacity and enabling 10 to 100 times faster network speeds with greatly reduced latency. It also will support many more connected devices. All these benefits are crucial given the rise of such trends as IoT, artificial intelligence and machine learning, augmented and virtual reality, autonomous cars, cloud and edge computing as well as data analytics.

U.S. lawmakers for years have been wary of Chinese companies such as Huawei and ZTE, saying their close relationships with the Chinese government represent a national security threat. Broadcom is based in Singapore and is in the process of moving their headquarters to the United States and becoming a U.S. company.

In his letter to Congress, Tan said Broadcom is “fully committed to making the United States the global leader in 5G by focusing resources and strengthening leadership in this area. We also will work closely with the United States government as we drive to achieve and sustain this global leadership in 5G and beyond. … In addition, Broadcom will not sell any critical national security assets to any foreign companies.”

Enderle questioned what is driving Broadcom to make its hostile takeover bid and said U.S. regulators should work to see who might be behind the push, a question he said is of more importance than 5G.

“Hostile takeovers typically destroy the viability of the acquired asset because they are massively disruptive and the acquired employees aren’t slaves and will oppose the new management,” he said. “This means whatever Broadcom pays, the value of what they will get will be a fraction of that. Broadcom has an experienced team and would know that, from a financial standpoint, this will be a disaster.”