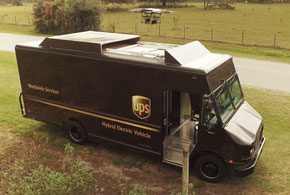 United Parcel Service delivery trucks are a familiar site on U.S. streets. But Imagine a UPS truck, which the company calls a “Package Car” stopping along the side of a road and launching a drone, which delivers a package while the truck driver delivers another package to another location. The drone is allowing the UPS to make two deliveries at the same time, but only driving to one location, potentially boosting efficiency, reducing costs and increasing profits.

In a video released by UPS, you can see the entire process. The driver pulls off the road, then enters the rear of the truck to load an express delivery package into the basket under a drone. The drone takes off, crosses a field and lands with the delivery. Meanwhile the driver continues on to another location, and makes a standard in-person delivery.

UPS is working with the Workhorse Group, a company that makes electric delivery vans, and autonomous vehicles including drones. The UPS truck used for the test was a hybrid electric vehicle. Workhorse actually built the drone launching system and outfitted the truck for the test.

“We performed the test with Workhorse on how we can integrate drones into day to day operations,” explained Kyle Peterson, a spokesperson for UPS. “We chose to do it in a rural area where the addresses are miles apart. The driver can go to one address; the drone can make a delivery while the driver is delivering to another. It cuts out two legs of a triangle.” Peterson noted that it has an additional benefit, “It cuts out windshield time.”

Windshield time is a UPS term for unproductive time when the driver is not actually delivering a package, such as when the driver is traveling between stops. By eliminating that extra time behind the wheel that would otherwise be taken up by miles of driving and the time required for another delivery, efficiency is improved.

According to a study done by UPS when determining the efficiencies of its ORION navigation system, an elimination of one mile of driving per driver per day would save $50 million for the company per year. In rural areas, such as the Florida blueberry farm where the test was run, the efficiencies could be even greater because just one delivery per day could save many miles.

The drone system is programmed so that once launched, the drone will fly autonomously from the truck to the delivery destination where it drops off its package. The drone is keeping track of where the truck is, so that when it’s finished the delivery, it will fly to a rendezvous with the truck to land on the rooftop docking area.