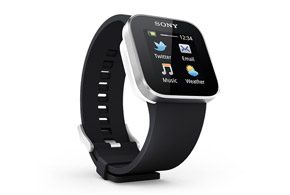 The new LG G Watch R smartwatch will be available for sale in Europe in the beginning of November and will be coming to the United States soon after, while Sony’s upcoming new SmartWatch 3 can now be preordered through Verizon Wireless, with devices shipping by Oct. 30. Both watches run on Google’s Android Wear OS.

The coming global rollout of the latest LG smartwatch was unveiled in an announcement by the company on Oct. 24, which described the first launches to happen in countries such as France, Italy, Spain and the United Kingdom, “followed by key markets in North America, Asia and the Commonwealth of Independent States (CIS) soon after,” the company stated. “Customers in select markets will also be able to purchase G Watch R on Google Play in the weeks ahead.”

The LG G Watch R differs from many other smartwatch designs by having a traditional round face like a typical modern wristwatch. The smartwatch has a circular, 1.3-inch plastic OLED display with six different pre-loaded electronic watch face designs, according to LG. The timepiece features a case of stainless steel and aluminum, a 410mAh battery, a 1.2GHz Qualcomm Snapdragon 400 processor, 4GB of storage and 512MB of RAM. The smartwatch is also dust-proof and water-resistant for up to 30 minutes at a maximum depth of 1 meter, and can be worn with any 22mm wide watch strap.

The recent Google update to the watch’s Android Wear operating system software will add offline music playback capabilities to the device once the update is installed by users, according to LG. The price of the timepiece has not yet been announced.

“While the original G Watch was designed to be a no-nonsense, pure Android Wear device, the G Watch R was developed with a more aesthetic eye,” Dr. Jong-seok Park, president and CEO of the LG Electronics Mobile Communications Co., said in a statement. “The G Watch R represents LG’s commitment to meld form and functionality together in perfect harmony and to create a device that not only looks great but more importantly, offers technology that makes life more convenient.”

The new Sony SmartWatch 3 (pictured) is expected to arrive sooner than the LG watch, now that Verizon Wireless is taking preorders with deliveries expected to begin by Oct. 30, according to Verizon. The devices are available for $249.99 through the carrier.

The new smartwatch has a 1.6-inch LCD transflective display that allows visibility in the bright sunlight, on-board music storage of 4GB, a stainless steel back panel and is dust-proof and waterproof for up to 30 minutes, according to Sony.

The new LG and Sony smartwatches enter a marketplace that continues to get more crowded each month with more choices for consumers. In July, Samsung and LG simultaneously unveiled their respective Samsung Gear Live and LG G Android Wear smartwatch models, with Samsung’s device retailing for $199 and LG’s smartwatch retailing for $229.

Both smartwatches had been announced earlier at June’s Google I/O 2014 developer conference, where they were a big part of Google’s Android Wear initiative—the company’s operating system for wearable devices—which was unveiled earlier this year.