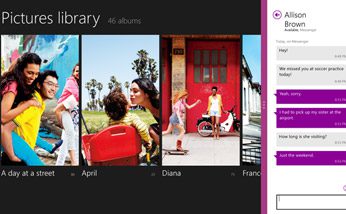 At long last, Microsoft has launched Windows 8. The operating system is available for x86-based computer users in Basic, Pro and Enterprise editions. On the mobile side, Microsoft is offering Windows RT for devices that are based on ARM processors. From a product perspective, Microsoft believes that it has all of its bases covered, allowing it to appeal to just about any customer.

Design-wise, Windows 8 is very different. The operating system has ditched the tray at the bottom of the screen for a new tile-based system. The new Windows 8 design, Microsoft says, will make it much easier for folks to handle tasks. Those who actually have used the operating system, though, say that the learning curve is steep. Whether users will like the software more over time, remains to be seen.

Still, Windows 8 promises new opportunities for Microsoft, PC OEMs and even users. Microsoft and its OEM partners can regain some lost market share from Apple. Users, who have increasingly been willing to consider Apple’s computers, will have a totally different operating system to weigh against OS X Mountain Lion.

But for the average buyer, making a decision whether or not to buy Windows 8 is not so simple. The platform looks to be appealing in some ways and troublesome in others. Read on to find out what features in Windows 8 are good and which are bad.

It’s nice to see Microsoft finally support ARM processors. For years now, ARM-based devices have been wildly successful in the mobile space, thanks to their combination of processing power and efficient energy consumption. Until now, however, Microsoft has only supported x86 architecture. With ARM now in the mix, more vendors can start making Windows-based devices.

According to nearly everyone who has tried out Windows 8, there will be a steep learning curve affecting early adopters. The operating system has a new design, its system tray is gone and determining where programs have gone when minimized is difficult. That’s a problem for Microsoft.

3. Good: A cohesive design across all services

One of the nice things about Microsoft’s new software strategy is that its design philosophy is carrying throughout all of its products. Now, Windows will look far more similar to Windows Phone. The company’s other software applications will also feature the new interface, previously known as Metro. Having a cohesive design strategy is integral to Microsoft’s long-term success as it tries to bring more customers to all of its products. Familiarity matters.

4. Bad: Too many versions

Microsoft is unfortunately offering too many versions of Windows. Windows 8 customers will need to choose between a basic edition as well as Pro and Enterprise. Windows RT will be available on ARM-based devices. For consumers, choosing Windows 8 or Windows 8 Pro will be easy. But enterprise users won’t have such an easy time, considering Pro might be right for some operations, but Enterprise would be ideal for others. Companies must also deal with application incompatibility with Windows RT. It’s a real issue.

Microsoft has taken a page out of Apple’s book and decided to offer a digital application marketplace in Windows 8. That move should popularize digital distribution across the Windows ecosystem and possibly put an end to Windows 8 discs.

Microsoft is trying its luck at digital streaming with the addition of Xbox Music to Windows 8. When users boot up the operating system, they’ll find that they can stream music for free in an ad-supported pane. For $10 a month, the ads are taken away. It’s nice to see Microsoft think beyond operating systems and start delivering useful programs.

For now, don’t expect too many PC makers to have worthwhile products available. Although just about every major PC OEM will offer Windows 8, the computers they’re showing off now are basically Windows 7 machines with a new operating system. Expect the top Windows 8 products that take advantage of the software’s best features to come out at the Consumer Electronics Show in January.

According to Microsoft, Windows 8 has far better security than its predecessors. The company does that by authenticating the operating system before booting to ensure there isn’t something malicious affecting the system and user data. The operating system also comes with improved anti-malware and Windows Defender support.

Unfortunately, Microsoft wasn’t able to get too many developers to start producing applications for its Windows 8 Store. Microsoft hasn’t yet released official numbers, but some have said that the marketplace has less than 8,000 programs. Considering Apple’s App Store has 100 times that, it’s about time Microsoft starts leaning on developers to get more programs into its store.