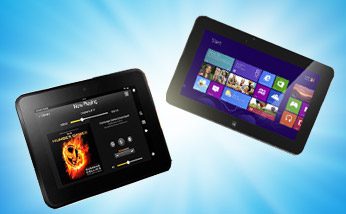 A smaller Surface tablet may be in the works. That is, if Microsoft decides to exploit new Windows 8 certification changes that the company itself quietly issued earlier this month.

ZDNet’s Ed Bott spied the updates in the Microsoft’s Windows Certification Newsletter for March 12. The changes, while seemingly minor, could have a major impact on Microsoft’s ability to compete in the white-hot tablet market.

Going forward, tablets that adhere to the new guidelines can have a minimum resolution of 1024 by 768 pixels, precisely the same resolution of Apple’s iPad Mini. By comparison, Microsoft’s own 10-inch Surface RT tablet has a resolution of 1366 by 768 while the Surface Pro sports a 1920 by 1080, full-high-definition screen.

According to Microsoft, it doesn’t intend to turn back the clock on tablet display pixel counts. It’s clear that the company is hoping that Windows 8 will make a splash in the booming market for small tablets.

“This doesn’t imply that we’re encouraging partners to regularly use a lower screen resolution. In fact, we see customers embracing the higher-resolution screens that make a great Windows experience. We understand that partners exploring designs for certain markets could find greater design flexibility helpful,” states the newsletter.

With this shift, future Windows 8 tablets may follow in the footsteps of some big sellers for Amazon and Apple.

After finally launching a Kindle Fire fighter of its own, Apple has been enjoying blockbuster tablet sales. “Apple had planned to sell 40M iPad Minis (7.9 inches) and 60M iPads (9.7 inches) in 2013. However, the reality seems to be the reverse, as the iPad Mini has been more popular than the iPad,” wrote David Hsieh, DisplaySearch vice president, in a Feb. 28 blog post.

Brisk iPad Mini sales helped the company set new sales records. Apple sold a record 22.9 million iPads during the fourth quarter of 2012—the same quarter the device launched—compared with 15.4 million during the first quarter of 2012.

An analysis of display shipments during December 2012 and January 2013 revealed that tablet makers are embracing smaller form factors and shifting away from large screens. “Shipments of 9.7-inch tablet PC panels collapsed, falling from 7.4 to 1.3M, while 7-inch and 7.9-inch panel shipments grew rapidly, from 12 to 14M. Shipments of 10.1-inch panels grew only slightly,” informed Hsieh.

While OEMs may welcome the change, Microsoft, by settling on a minimum resolution of 1024 by 768 for Windows 8 tablets, may be ceding the technological edge to rivals.

Windows 8 “mini” tablet makers will have to make another concession. Worried about a less-than-optimal experience at a resolution of 1024 by 768, Microsoft is nixing app-snapping functionality.