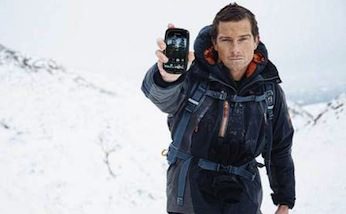 The “live more, fear less” handset,” as Sprint has taken to calling it, is 4G Long-Term Evolution- (LTE-) enabled, supports next-generation push-to-talk (PTT) technology, has an impact-resistant 4-inch In-Plane Switching (IPS) touch-screen and what Kyocera calls a “smart sonic receiver” that helps to make calls clear in even super-noisy environments.

It can also be submerged in 3 feet of water for 30 minutes and meets military standards for surviving in temperature extremes, blowing rain, low pressure, high humidity and vibration, shock and dust. Kind of like Grylis.

It’s a good phone for outdoorsy-types who subject their phones to raging rapids or muddy mountainsides, and indoorsy-types who are subjected to incredibly energetic children—again like Grylis, who is the father of three boys.

What might have been a marketing home run, however, instead started a reporter remembering a comment that Sprint CEO Dan Hesse made during Sprint’s Feb. 7 earnings call.

“We got the iPad for the first time pretty late in the year, and of course Apple—to their credit, they protect their brand very well—but it takes some time to get advertising in the market that meets Apple’s approval,” said Hesse.

“So we really didn’t have much of a marketing quarter in the fourth quarter, with respect to tablets. We hope that will improve; we need to increase awareness out there in the marketplace that Sprint carries the iPad, and we intend to work on that in 2013,” Hesse said.

Translation: Apple thinks our ads stink, so we haven’t been able to run anyway.

One has to imagine that between Sprint and Kyocera, the green light is always on.

In a video Kyocera posted to YouTube, Grylis, in an opening shot, appears to be in a dark, dripping cave. But no, time reveals that he’s at an awful indoor water park with his kids—or rather, a lot of people’s kids—and a lot of splashing and phone-drenching ensues. (Even the potential perk, for the over-12-year-old crowd, of Grylis in bathing trunks was undone by the wardrobe person who gave Grylis a shirt to wear in the pool.)

The point, of course, is that while Grylis and the Torque can cross the Artic and scale peaks, these aren’t life’s only adventures.

“Torque, the rugged 4G Android for your extreme and every day,” said Grylis, in his appealing British accent—truly all that’s appealing about the ad.

There’s a reason that Apple is Apple and the iPhone is the world’s top-selling smartphone. Sprint and Kyocera may want to take notes.