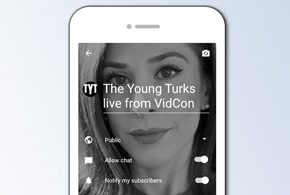 YouTube’s mobile app will soon gain its own live streaming capabilities for content creators, just as they have had using YouTube’s Web-based platform since 2011.

“YouTube mobile live streaming will be baked right into the core YouTube mobile app,” Kurt Wilms, product lead for immersive experiences at YouTube, wrote in a June 23 post on the YouTube Creator Blog. “You won’t need to open anything else, just hit the big red capture button right there in the corner, take or select a photo to use as a thumbnail, and you can broadcast live to your fans and chat in near-real time.”

The addition of mobile live streaming capabilities will come to the app soon for general distribution but are initially being launched immediately with several YouTube content creators, including The Young Turks, AIB, Platica Polinesia, SacconeJolys and Alex Wassabi, Wilms wrote.

YouTube began offering live streaming on its Website in 2011, which allowed millions of people around the world to watch the Royal Wedding in 2011, wrote Wilms. Web viewers were also able to watch Felix Baumgartner leap from space live on YouTube in 2012 and were able to see a first-ever 360-degree live stream broadcast during Coachella, he added.

“Because it’s built right into the YouTube app, mobile live streaming will have all the features your regular videos have—you’ll be able to search for them, find them through recommendations and playlists and protect them from unauthorized uses,” he wrote. “And since it uses YouTube’s peerless infrastructure, it’ll be faster and more reliable than anything else out there.”

In April, YouTube bolstered its 360-degree video offerings with 360-degree live streaming capabilities and spatial audio, according to an earlier eWEEK story. In the past, YouTube content creators could create 360-degree content, but could not live stream it. YouTube first launched support for 360-degree videos in March 2015 and has continued to develop its possibilities.

With the new live streaming capabilities, content creators will now be able to add new features to their events from around the world, according to YouTube.

The spatial audio services provide viewers with a new way to hear the content they are seeing with their eyes by immersing them into the audio, giving them increased sound depth, distance and intensity all at once, according to YouTube.

Rumors of YouTube’s interest in live streaming 360-degree video surfaced in March, according to an earlier eWEEK story. At the time, the company was reportedly in talks with manufacturers of 360-degree cameras to find out how to bring fully immersive live broadcasts to YouTube.

Immersive videos are basically seamless composites of video recorded from all 360 degrees of a particular scene using a specialized camera system. Users can watch the spherical images generated by these cameras on mobile devices or desktop systems. The main appeal of such videos is that they allow the viewer to pan 360 degrees and tilt up or down to get the same views of a scene that they would have if they were actually physically present at a location.

In March 2015, when YouTube announced support for 360-degree video uploads, the company said it was working with several camera manufacturers across the industry to enable easier uploads of immersive video on its platform.