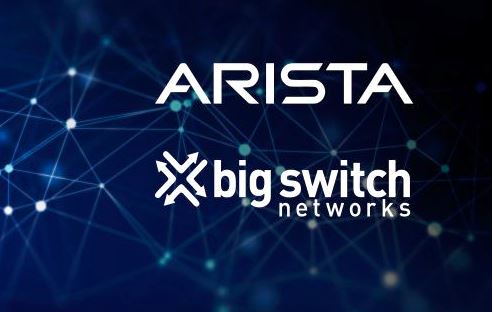 High-performance network vendor Arista Networks last week announced it had acquired Big Switch Networks. The announcement was made during its fourth-quarter financial earnings call, which was solid despite some volatility with the cloud vendors. Big Switch was one of the pioneers in software-defined networking (SDN) and has raised north of $120 million since it was founded in 2010. No financial terms were provided, but the deal had been highly rumored during the past week.

When Big Switch launched, it was one of many SDN controllers available and the company was to catch the wave of white box switches coming into businesses disrupting traditional vendors such as Cisco Systems and Juniper. A funny thing happened on the way to the bank, though; the market evolved much slower than expected, giving the traditional vendors time to jump into it, and leaving companies that include Big Switch on the outside looking in.

To Big Switch’s credit, instead of fighting the tide, it made its own “big switch,” and it pivoted to become a controller-based packet broker—which provides network data and analytics to help network professionals manage their networks better. The combination of the controller and nodes enables the big monitoring fabric (BMF) to scale out as easily as Arista can scale out its network. Big Switch still sells its SDN controller known as Big Cloud Fabric (BCF), but that product as evolved to be used in hybrid, multicloud environments.

Packet brokers have become increasingly more important because they play a key role in simplifying networks where large numbers of management and security tools are used. Without a BMF-like product, network and security teams can be overwhelmed by tool sprawl. Packet brokers make the environment simpler because they sit between the network and tools layer, enabling engineers to direct traffic as they need instead of sending all traffic everywhere.

Gigamon has been the runaway leader in this space for years, but Big Switch has done a nice job of bolstering its product to close the gap between the two companies. Arista’s cloud behind it should create a nice two-horse race.

On paper, BMF competes with Arista’s DANZ (Data ANalyZer), but in actuality, the two are very complementary. Think of DANZ being almost “Big Switch light,” where BMF brings a range of new features and much greater scale. Arista has had moderate success with DANZ, but the addition of Big Switch should enable Arista to take the business to another level. This is because it can be a lead product that could pull through networking products.

Arista can also use the data from BMF to beef up its CloudVision monitoring and automation portal. Over the past several years, the company has been laser-focused on making networks easier to operate, and CloudVision plays a key role in that. Through the portal, engineers can see the entire network and then automate a number of tasks. The BMF data provides more granular visibility into how things are running and could be used to move to predictive operations.

One of the questions surrounding the acquisition is what happens to the Dell-Big Switch relationship, in which Dell OEMs Big Switch’s products. Both companies say the partnership will remain in place. From my conversations with Dell, I know it loves the Big Switch products and often uses it as a door opener to a broader sale.

Neither party has stated this, but I suspect the acquisition by Arista will lead to a broader relationship. Dell’s networking strategy has been to embrace open platforms and give customers a choice of whatever product they want in any form factor. The architecture of Arista’s products and EOS operating system are ideally suited to Dell’s strategy.

The purchase of Big Switch is another acquisition that puts them in a stronger position in an adjacent market. Prior to the acquisition of MoJo Networks, Arista could talk campus networking but didn’t have the portfolio to be a serious player; now it does. Similarly, prior to Big Switch, it could talk the monitoring talk, but now it has a best-in-class product, enabling it to move into a leadership position.