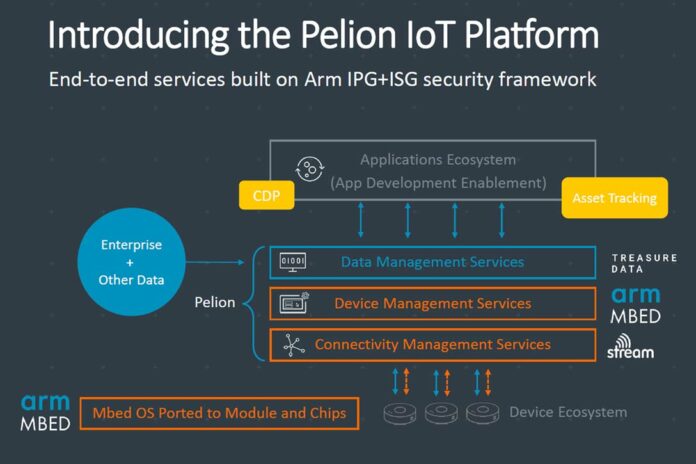 Arm is unveiling its Internet of things platform things after acquiring Treasure Data, a seven-year-old data management company that Arm officials said was the final technology component that it needed to assemble its Pelion IoT system.

Arm officials announced the Treasure Data acquisition and Pelion IoT platform on Aug. 2, saying the deal completes an effort that began about 18 months ago to assemble all the essential components for the platform. This included Arm’s mbed IoT device management system and connectivity management technology acquired in June when the chip designer bought Stream Technologies.

Pelion is designed to give enterprises complete device and data management capabilities to help them gain business value from the rapid rise in the number of connected devices and the data being generated by them, according to Arm officials.

Through a single platform, users will get a unified view of the connected devices on their networks, get tools to optimize the data traffic from these devices and manage all of this in private, public or hybrid clouds or in on-premises environments.

As a result, companies will quickly gain insights from their data that will drive better business decisions, according to Hima Mukkamala, senior vice president and general manager of IoT services at Arm.

“Organizations need their IoT platform to manage all of this diversity and complexity from the device to the data,” Mukkamala wrote in a post on the company blog, adding that Pelion “will enable organizations to approach this fragmented and often frustrating landscape and derive real business value.”

Arm has for most of its history been best known as developer of most of the chip technology found in mobile devices, such as smartphones and tablets. The company creates low-power system-on-a-chip (SoC) designs that are then used by processor manufacturers including Qualcomm and Samsung. Arm’s designs also have gone into chips that power other systems, such as servers, storage appliances and networking gear.

However, the company was bought by Japanese IT giant Softbank in 2016 for $32 billion, and has since broadened its capabilities while putting a strong focus on the IoT space. Arm was already eyeing opportunities in the market since launching the mbed IoT platform and operating system for connected devices in 2014.

However, under Softbank, the company has ramped up its efforts in the IoT sector, including the rollout last year of a security framework for connected devices. The work comes as Arm officials look to 2035, when they predict there will be a trillion connected devices worldwide.

The complex challenge that will come from managing this enormous number of those devices and the data they create is the driving force behind Pelion. Bringing Treasure Data into the fold offered Arm the chance to add data management capabilities to the platform.

According to Arm Chief Marketing Officer Joyce Kim, Treasure Data has more than 300 enterprise customers around the world, processes 50 trillion records every day and 2 million events per second.

“When we look at the global IoT opportunity, this is a phenomenal scale that we just found…to be a great complement to our IoT vision,” Kim said during a press conference.

She said Arm provides the foundational technology for the IoT, with more than 125 billion Arm-based chips sold for everything from the smallest sensors to some of the largest connected systems. Currently about 70 percent of the connected devices in the world run on Arm-based chips, including 95 percent of all smartphones.

“If you think about this as the backdrop to an IoT landscape, we see a world where we’re headed toward a trillion connected devices by 2035,” Kim said. “For the last year and a half or so, we’ve focused on building value on top of this chip architecture to manage the complexity we see in the IoT space, especially in the device management area.”

With the massive amounts of data being generated—IDC analysts are predicting 163 zettabytes by 2025—management is a concern, according to Dipesh Patel, president of Arm’s IoT Services group.

“Data management is an interesting challenge,” Patel said during the press conference. “At one level, everybody claims they can do data management. But data management includes a number of different steps that someone has to go through before they get to the point where they can start using the data. The supply of usable data is a problem that everybody needs to address in order for them to do analysis or visualization or even designing the application.”

Arm’s goal with Pelion is to give users a single platform to address those multiple steps, which range from ingesting and storing the usable data to preparing and sharing it, he said. The capabilities for analyzing and acting on the data will come from solutions developed by Arm’s customers and partners, Patel said.