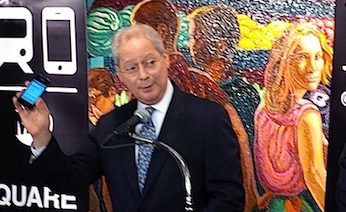 All parties suggested that wireless subscribers want to be connected no matter where they are, and the subway is no exception. The service also offers a type of modern comfort in a city that’s learned to make security top-of-mind.

“[MTA] customers now know that when they see something, they can now say something using their device to call 911,” Gov. Cuomo said in a statement. “And now with all the major carriers on board, the vast majority of MTA customers will have the ability to do so.”

T-Mobile and AT&T rolled out service in six stations in Manhattan’s Chelsea neighborhood in September 2011. Extending service to the next 30 stations marks the end of Phase One, in a seven-phase plan that will bring coverage to all 271 stations by a goal of 2017. (The MTA’s contract says 2018, but it has high hopes.)

As part of Tuesday’s announcement, Verizon Wireless and Sprint said they were finalizing agreements to participate in the network.

The price tag for the entire project, which falls entirely to Transit Wireless and the carriers, is expected to be between $200 million and $250 million.

William Bayne Jr., CEO of Transit Wireless, which was formed in response to the MTA’s requirement to provide a shared wireless infrastructure, described the challenge of the effort during a press conference inside the Times Square subway station.

Chief among the challenges were the facts that it’s a “complex, 110-year-old system that’s open 24/7” and it’s one of the most heavily trafficked public transit systems in the world, said Bayne. “We sat down and said, ‘How are we going to do this?’ It came down to: We couldn’t do it alone.”

The effort, years in the making, includes customized equipment that can handle extreme heat, cold and moisture.

DeVito said the initiative will also help to spur “transit innovation” and that AT&T is working with the MTA and the Polytechnic Institute of New York University on an AppQuest Challenge to create a next generation of subway apps.

“We have 250 developers signed up, and we can’t wait to see how it will change the lives of the 8.5 million people who take the subway every day,” said DeVito.

T-Mobile has been investing billions of dollars to grow its network and was the first major carrier to offer HD Voice, a technology that improves the quality of voice calls by, in part, separating the speaker’s voice from surrounding noise. Both parties on a call have to be on phones that can take advantage of the technology, which T-Mobile’s iPhone 5, HTC One S, Samsung Galaxy S III and Galaxy S 4 all can.

“HD Voice will really come in handy in a noisy place such as this,” said Tom Ellefson, T-Mobile’s regional vice president of Engineering and Operation.

Ellefson added that when T-Mobile officially launches its Long Term Evolution (LTE) network in New York this summer, “we will extend it into the subway.”

Travelers not on one of the represented networks can take advantage of Boingo’s WiFi network, which is free, though they’ll likely have to watch an ad before being connected.

“The transit bureau wants to provide a level of security where people feel as comfortable using [their phones] underground as they do outside,” he said. “It’s something you should use as you would outside.”

A full listing of the 36 stations—which are the MTA system’s most heavily traveled—is available on the MTA Website.