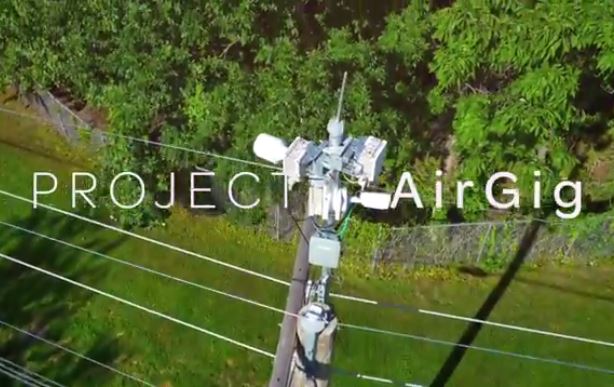 AT&T is thinking literally outside the wire in a new project designed to expand the availability of gigabit-speed internet power resources for wireless, edge computing and the IoT.

Project AirGig, introduced Sept. 10 at the telecom’s first Spark tech conference at the Palace of Fine Arts in San Francisco, could well become a mainstay of connectivity in the next two to three years, if not sooner. The idea is to enable power to travel alongside existing power lines using AT&T Labs-created components, such as low-cost plastic antennas, a radio distributed antenna system (RDAS), mmWave surface wave launchers and inductive power devices.

The RDAS reconstructs signals for multi-gigabit mobile and fixed deployments. With the RDAS, AT&T found a system design to effectively deliver not just broadband, but also mobile traffic. The mmWave surface wave launchers can power themselves via inductive power devices without a direct electrical connection. These devices then create a high-speed signal that travels along or near the wire–not through it.

This signal means connected experiences become an everyday reality for more people–even in locations considered difficult to serve before the advent of Project AirGig.

Power Waves Radiate Out from the Cables

In this way, the power waves also radiate out—in a mesh-like fashion—from the power lines, so they can be used as a constant gigabit power source by stand-alone electronic devices, such as smartphone, cameras, sound and weather sensors and other devices.

AT&T is now in advanced discussions with technology suppliers to start testing and building this commercial-grade Project AirGig equipment, the company said.

You can view a YouTube video explaining the use cases of Project AirGig here. With power lines criss-crossing the U.S. but with internet connectivity not available in every location, access to the internet shoots way up using the AirGig approach.

Nearly one-third of the U.S. lacks high-speed or broadband internet access, so that’s why AT&T Labs started this project, which makes connected experiences an everyday reality for people–regardless of location.

AT&T said it was encouraged by last year’s trial results of Project AirGig technology in Georgia with assistance from Georgia Powered. That trial demonstrated how this technology can potentially be deployed in suburban and rural neighborhoods on a commercial scale. The company also said it is exploring another field trial soon in which it will focus on aspects of surface-wave systems, which could provide an important ingredient in a future 5G world.

AT&T said it has applied for more than 500 patents for AirGig. It has been conducting field trials both in and outside the United States.

The patents and the field trials are important next steps to scale Project AirGig and bring it to many more people and businesses across the country, the company said. “With 5G around the corner, timing couldn’t be better. We think Project AirGig and 5G have a lot of natural synergies, and we plan to test 5G paired with AirGig in the future,” an AT&T spokesperson said in a media advisory.

AT&T doesn’t yet have a date for commercial deployment of AirGig, but the company said it plans to expand field trials with a technology supplier with a goal of eventually making gigabit-speed internet as widespread as electricity.

Two Years in the Making

“Two years ago, AT&T revealed breakthroughs by researchers at AT&T Labs that became what we now call Project AirGig. It uses the power grid, which reaches almost every American, to deliver broadband internet,” Andre Fuetsch, President of AT&T Labs and Chief Technology Offer, said in a media advisory.  “Today, we’re confident that we’re on the cusp of a technology that could potentially help to solve the digital divide in this country.”