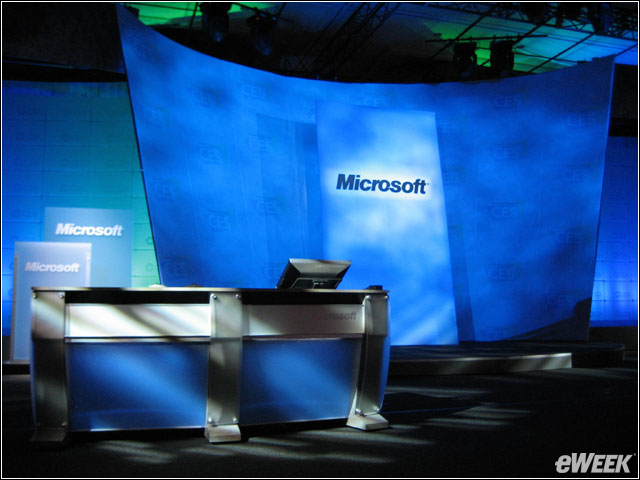 Before the Gates opening keynote, the stage is set for the release of the home media server and a focus on better connecting hardware and software to the content consumers and business users want available to them at all times. 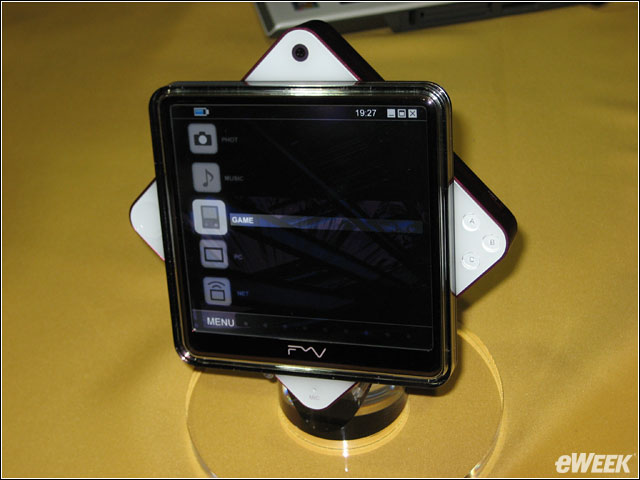 Fujitsu shows off a number of prototypes at CES, including this one that features touch-screen functionality and an eight-pointed star design. 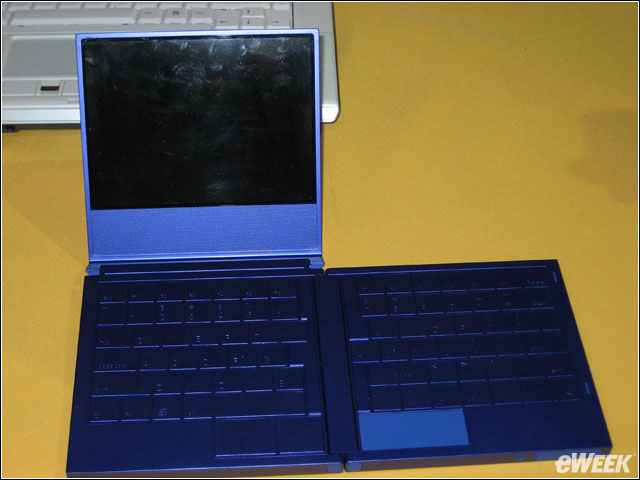 Another Fujitsu concept notebook being shown here at CES was the super-compact notebook that folds up in to a perfect square. No hardware inside as of yet, but the idea is pretty impressive. 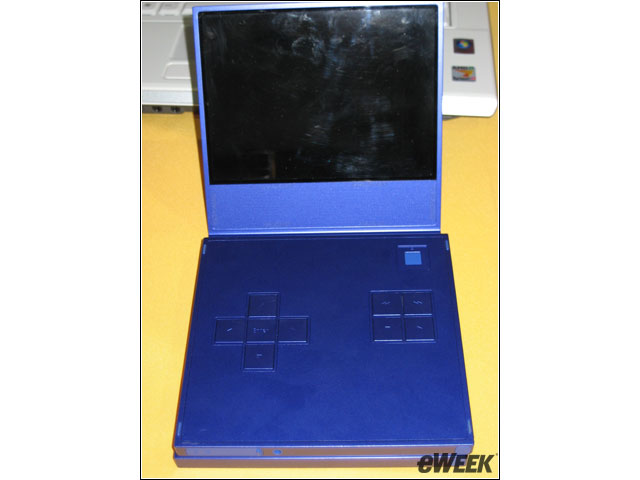 Here is the folding laptop shown with the keyboard folded up halfway. This thing weighed nothing, but then again, it was a prototype. 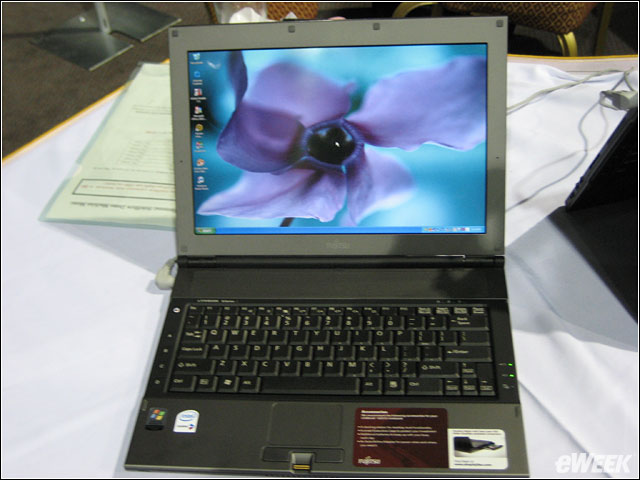 The ultra-thin Fujitsu Q2010 Lifebook is 0.75 inches thin and only 2.2 pounds, featuring Intel’s core solo ULV. The lack of an optical drive makes this super lightweight, but the most media friendly. 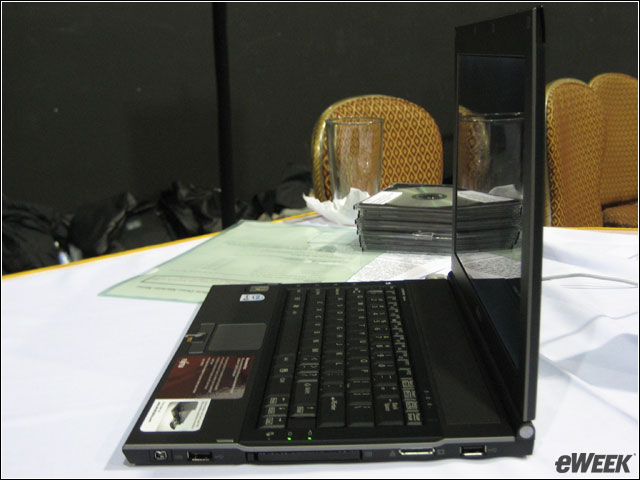 Look at how skinny Fujitsu’s Lifebook really is in this profile image. Now that’s ultra-thin at three-quarters of an inch. 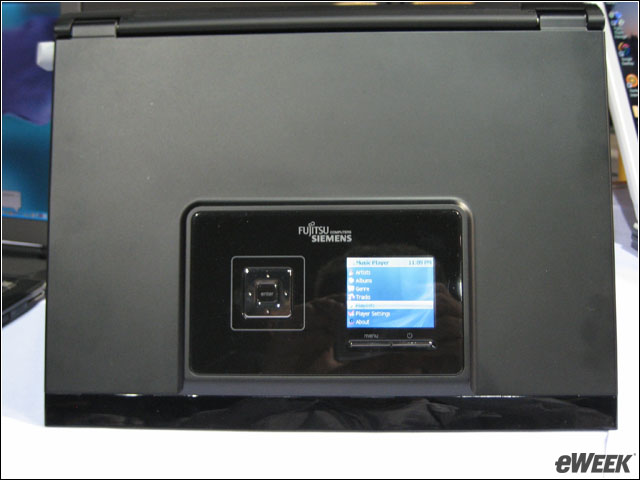 Here’s Fujitsu’s Lifebook prototype with auxiliary display functionality on the outside of the notebook for easier access to media while the laptop is closed. Fujitsu is working with Microsoft on this and calls this feature ‘Side Show.’ 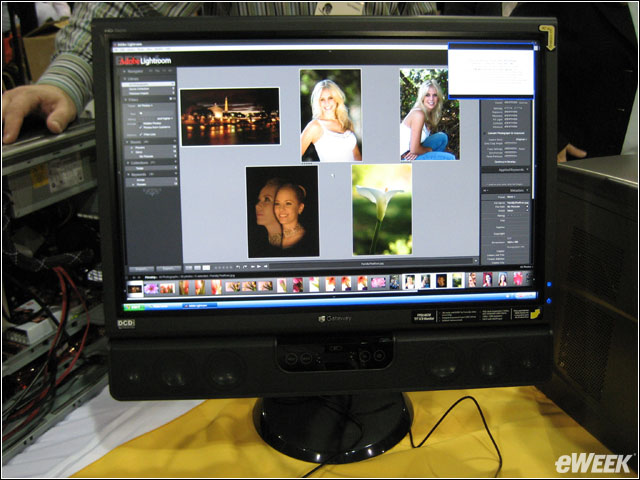 Gateway shows off its latest 24-inch monitor, which features contact-sensitive functions, picture-in-picture and a vertically rotating screen for use with design software or to show off images. 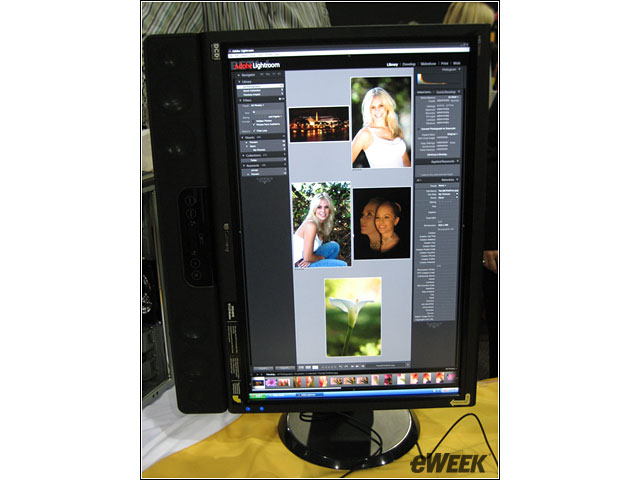 Here’s the Gateway monitor standing tall. You’ll notice how the images rotate with the use of intelligent software. Pretty impressive. 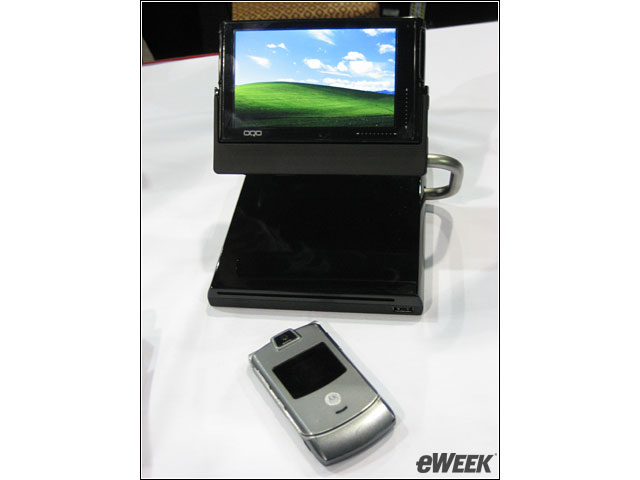 OQO launches the Model 02 ultramobile PC at CES, which weighs 1 pound, can fit in your pocket and is Vista capable. The Model 02 features built-in EV-DO WAN, Wi-Fi and Bluetooth. Notice the docking station underneath it that holds a thin optical drive for 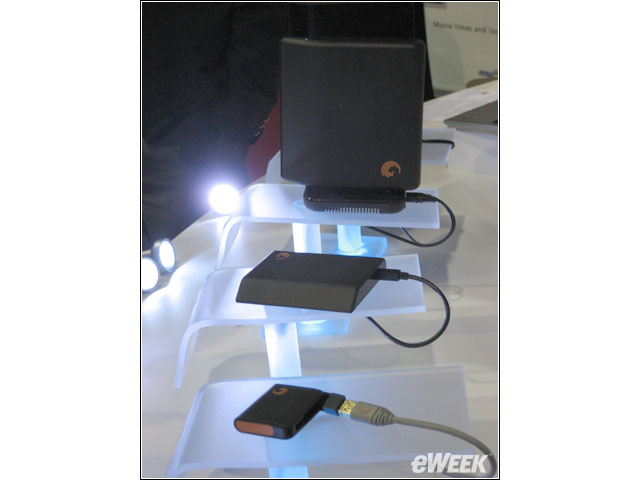 After last year’s acquisition of Maxtor, storage provider Seagate rebrands two lines at CES for intelligent storage and pure backup. These two lines are FreeAgent and Maxtor. Pictured here is the FreeAgent line from 12GB to 500GB capacities. 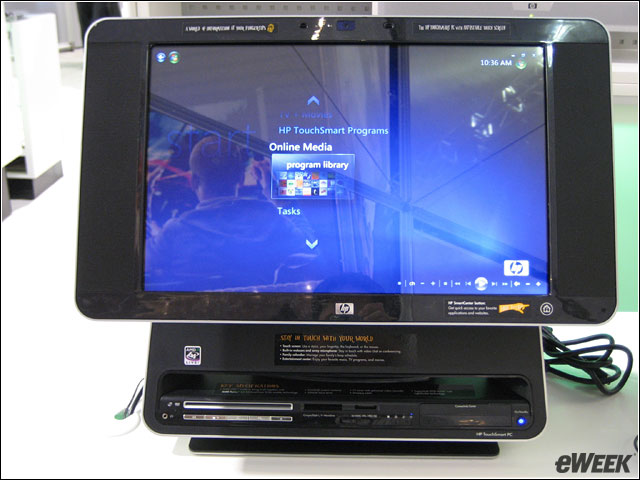 Hewlett-Packard announces its touch-screen PC at CES with a big, friendly plug from Microsoft during the Gates keynote. 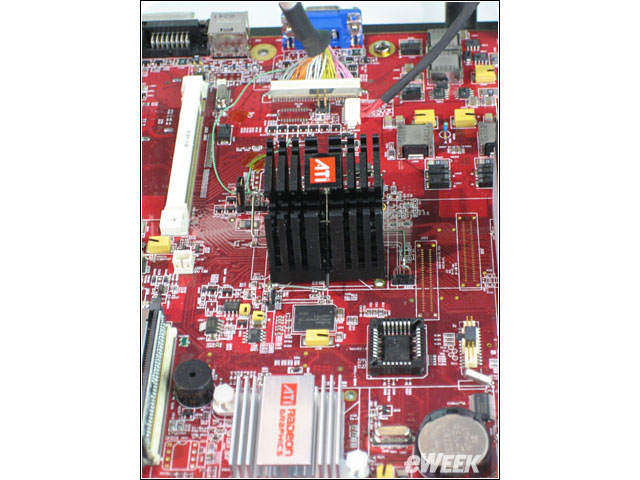 AMD was promoting its next-generation chip sets in both mobile and desktop formats. Here is AMD’s mobile chip set, which boasts a 5-hour-plus battery life and better power consumption. AMD showed off advances in this chip set by talking about the balance 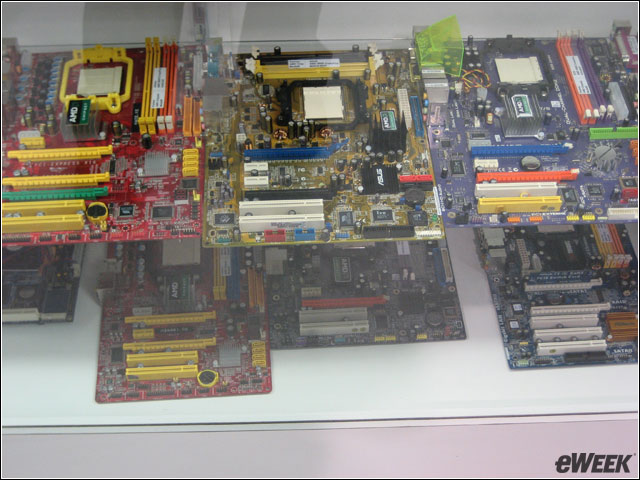 It’s an AMD menu of chip sets. Would you like fries with your chip set? 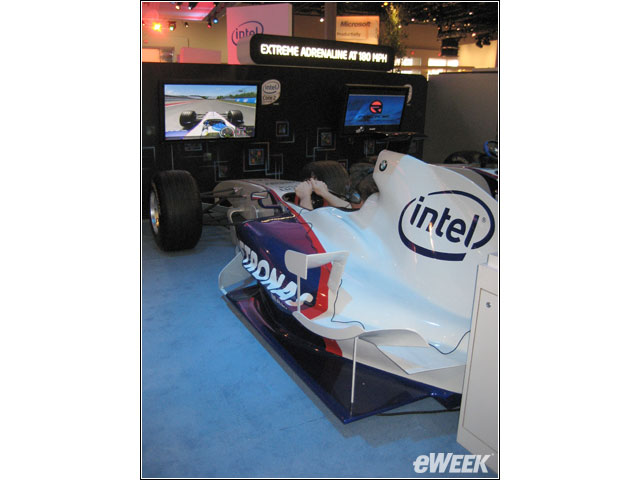 Intel was the envy of the CES crowd with this virtual-racing game inside an actual but stationary Formula One car. 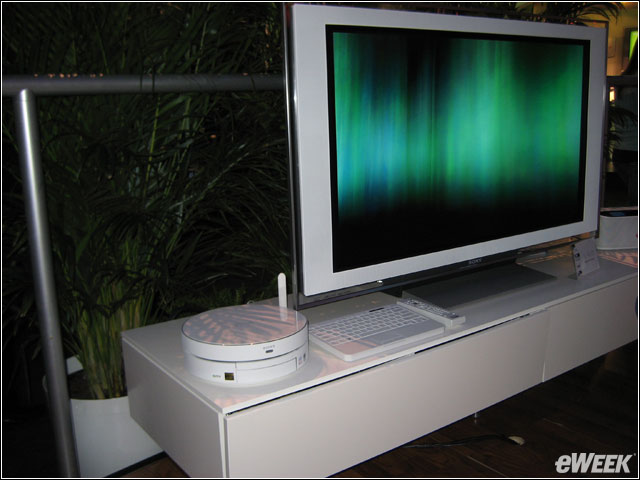 Sony launches the Vaio media center at CES, and here it is on display in a living room setting. Its round design is a unique one at the show this year. 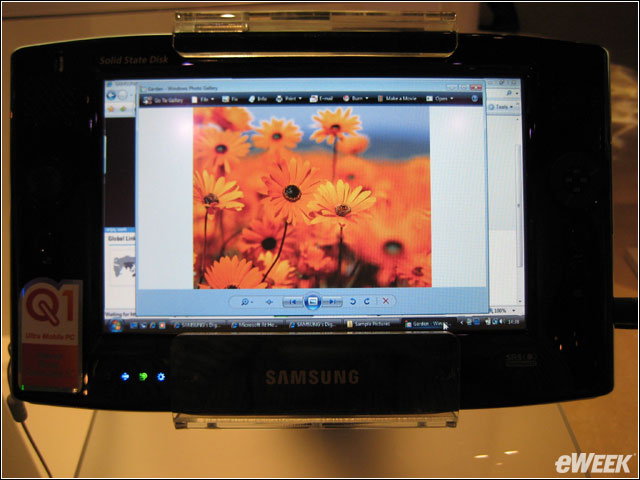 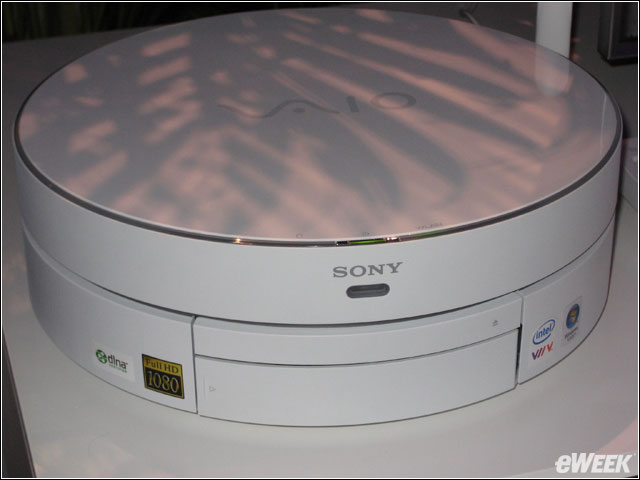 Here’s the Sony Vaio media center up close and personal (notice its roundness). 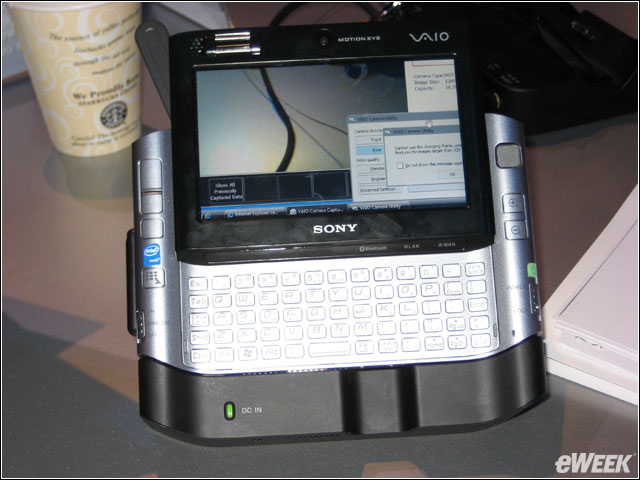 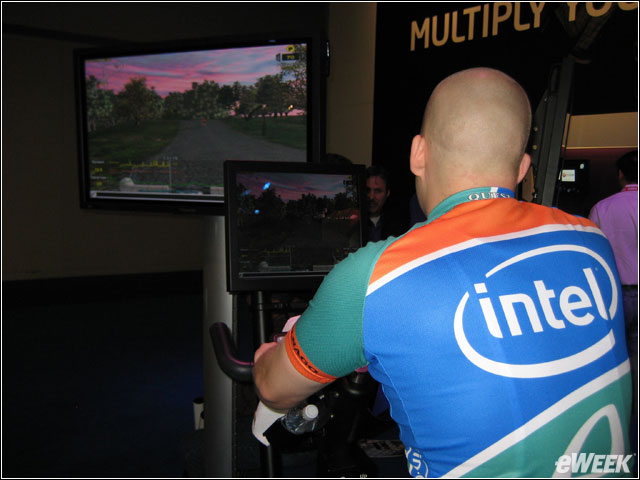 If your New Year’s resolution was to get in shape, here is the product for you. Expresso Fitness has an exercise bike that includes Intel processing, Windows Vista and an LCD screen with high definition. You can compete with others online, enable picture- 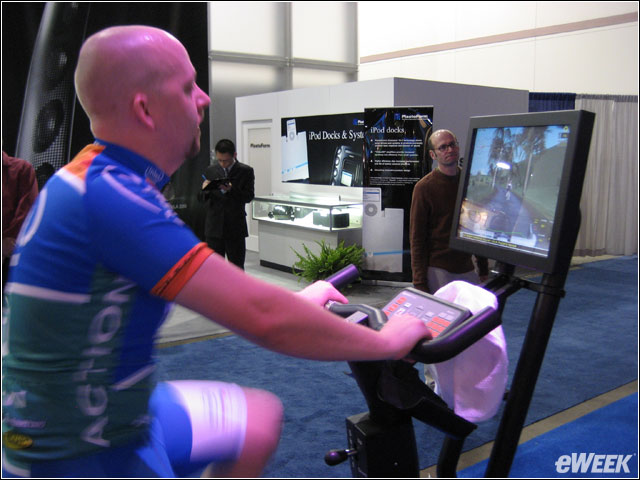 Here’s a side view of an Intel employee really working for his paycheck. The cycling and sweat were real. 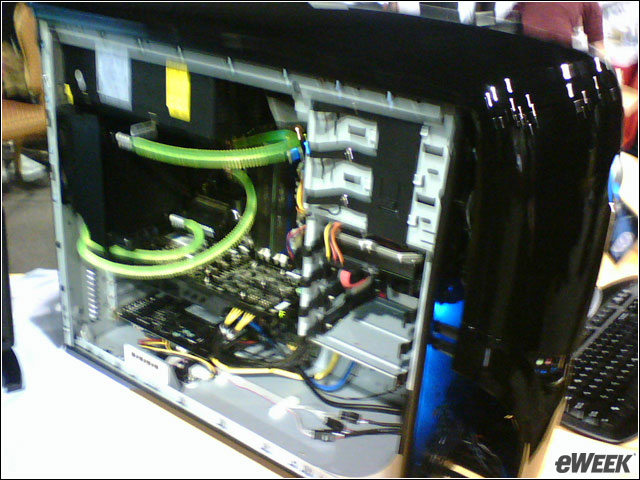 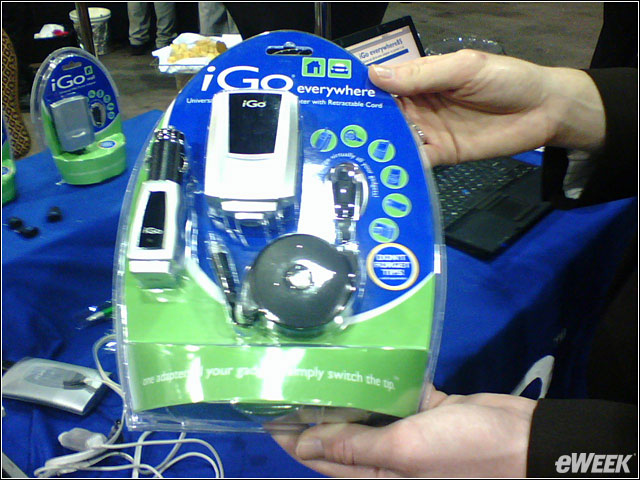 The iGo Everywhere solution can power and charge multiple gadgets with AC or DC power. 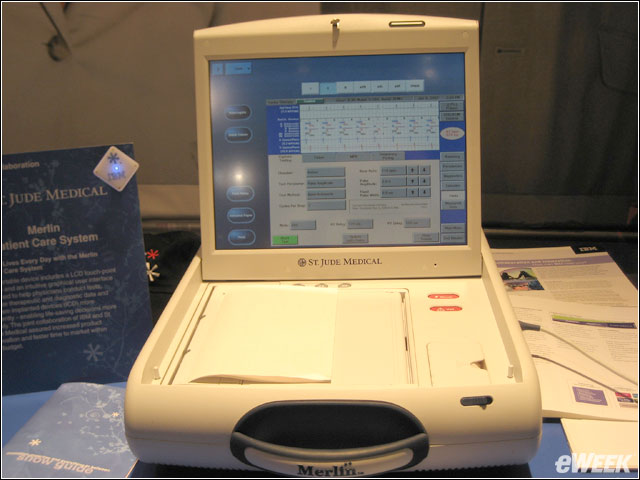 After a ten year lapse, IBM is back at CES helping to promote its partners and engineering know-how in processors, software and sensor technologies. IBM is happy to promote its processing technologies as being central to all the major gaming devices: Xbox 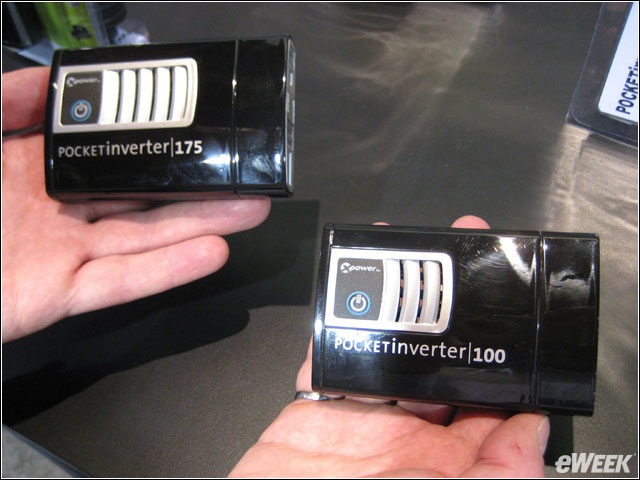 Pictured here are two power inverters (100 and 175 Watts) good for charging cell phones, laptops and other mobile devices. These babies from Vancouver-based Xantrex weigh only 3 pounds and are great for use on airplanes and cars. With price points in the