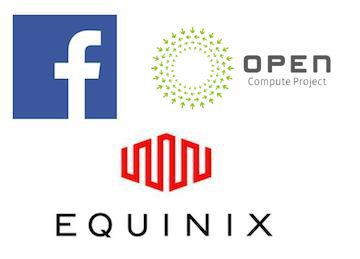 Silicon Valley neighbors Equinix and Facebook have hooked up on a project that could revolutionize the way network interconnection centers are designed and operated in the future.

Equinix and Facebook have been collaborating to build a diverse, open source platform for both software and hardware. Building on contributions to OCP, this ecosystem will be built on a new, open source architecture that will enable faster innovation and create greater efficiency in data center and hybrid cloud deployments.

To facilitate this ecosystem, Wedge open source switches developed by Facebook and contributed to OCP will be part of the new architecture inside Equinix. By working with Facebook to build this ecosystem, Equinix is able to provide its enterprise customers with an improved environment to push technology boundaries and develop next-generation interconnection networks.

Interconnection networks differ from standard data centers in that they serve as crossroads and optimizers for large public and private networks, rather than as physical stations for server, storage and networking equipment.

“The TIP program (Telecom Infrastructure Project) included AT&T, Verizon, Deutsche Telekom, BT, SK Telecom—some of the biggest telecom providers,” Equinix CTO Ihab Tarazi told eWEEK. “The idea is to get the same scale, efficiency and innovation to the telecom sites, and we joined it.

“We’ve been having a lot of good discussions with Facebook, and we’ll be leveraging their technology and those switches so we can build an exchange model using OCP hardware. Between us, we want to advance the idea of innovating on open source hardware and software independently, so we can enable a lot of key new applications.”

Tarazi told eWEEK that Equinix is also working with Mesosphere, which will provide a software layer called DCOS (data center operating system). DCOS is a container-management platform and abstraction layer that has seen increasing usage by networks, enterprises and some clouds, Tarazi said.

“The idea is to have OCP-based exchanges at Equinix, leveraging all the ecosystems of 1,000 networks and 1,000 clouds, and on top of it, Mesosphere providing DCOS to allow people to move containers in and out of multiple environments,” Tarazi said.

“The benefits are that enterprises can come in, build a very seamless hybrid cloud at the container level—if they’re doing microservices or something else. They can use containers on private and public clouds and move between platforms very quickly, and maintain quality, performance, policy, etc. using Mesosphere.”

Redwood City, Calif.-based Equinix also will be able to connect to new Internet of things (IoT) platforms, Tarazi said. “All these new IoT platforms need a place to plug into, as well as a lot of the new SDN (software-defined networking) platforms,” he said.

The deluge of data from devices and other industry trends are driving the need for the massive scaling and performance increases that new-gen open source hardware and software can provide. For example, the industry is clearly moving toward a more software-centric model, wireless capacity for the future 5G bandwidth is currently limited, and more and more faster devices are coming into the markets.

OCP and the ecosystem being built by Equinix and Facebook are designed to provide the scale and performance to satisfy these requirements through new-generation interconnection.

Equinix interconnect centers provide homes to more than 1,100 network providers, as well as 500-plus cloud service providers, which gives customers a broad choice of providers in any of Equinix’s 40 global markets. In total, Platform Equinix hosts more than 7,500 customers, each of them potential customers or partners in developing new solutions or new routes into untapped markets.

The Open Compute Project (OCP) is an effort Facebook and several partners started in 2011 as its looked for ways to rapidly scale its massive data centers without burning through huge amounts of energy or piles of cash. The giant social networking company, competing with the likes of Google and Amazon, saw the chance to open source actual hardware, much like Linux and others did in software.

Five years later, the OCP counts many of the largest tech vendors as members and continues to expand its reach in the data center, from servers to networking to storage.