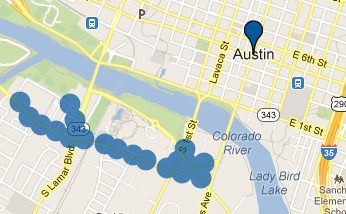 The announcement is widely viewed as a defensive move from the cable giant as Google plans to bring its own superfast Internet service, Fiber, to the Texas capital. Access to the TWC WiFi network is free to Time Warner Cable customers with standard Internet or above service plans and to the company’s Business Class Internet customers.

Users can look for the TWC WiFi network name and then follow prompts to connect to the network. To locate and access TWC WiFi Hotspots, customers can also download the free TWC WiFi Finder app available in Google Play and the Apple App Store or can visit the WiFi coverage webpage to view the hotspot coverage map. A company release said customers would be able to access “hundreds” of new WiFi hotspots as TWC builds out the network.

Additionally, the cable provider is offering free Trial and Prepaid Access options starting at $2.95 an hour, which are available on TWC WiFi for those not qualifying for free access. “Increasingly, our Austin customers want to take their high-speed Internet with them out of the home and on-the-go,” Kathy Brabson, area vice president, said in a statement. “The TWC WiFi network we’re building for Austin will allow our customers to greatly maximize their TWC Internet subscription–at no additional charge.”

Time Warner Cable Internet customers also have access to a nationwide free WiFi hotspot network, with more than 100,000 hotspots, through the CableWiFi network name. The network enables TWC Internet customers to access the hotspots operated by TWC and other cable companies in large cities across the country including New York City, Los Angeles, Chicago, Philadelphia, Boston, Washington, D.C., San Francisco, and others.

While TWC WiFi hotspots are not new, the company’s digital communications director, Jeff Simmermon, revealed that it was Google’s decision to deploy its Fiber service in Austin that caused Time Warner to speed up its development plans in Austin.

“We’ve been rolling out our free WiFi network across our footprint for some time now, as part of our larger strategy to offer significantly more value to our Internet subscribers,” he wrote. “Austin was in the game plan for 2013. But Google’s recent announcement encouraged us to deploy our network more aggressively now. As I mentioned a few weeks ago, we’re ready to compete.”

Earlier this month, Google officially announced that the tech-friendly, progressive city would be the second U.S. city that will get the company’s superfast Gigabit Internet service starting in 2014. The timeline in Austin calls for Google to start connecting homes there by mid-2014, and Google also plans to connect many public institutions to the system as it is built in Austin, including schools, hospitals, community centers and more at no charge.

Google’s first Fiber deployment in the United States has been going on in Kansas City, Kan., and Kansas City, Mo., where the company has been unveiling Google Fiber since the fall of 2012 in the first deployments of a system that the company hopes will go national in the future.