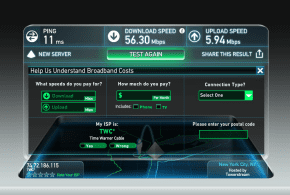 Google appears to be working on an Internet speed testing tool that will pop up directly in search results when a person types “check internet speed”—and likely also similar phrases—into the search engine.

Meyers then did some digging and unearthed a Google Support page for the service.

The page explains that the test is run through a partnership with M-Lab, which describes itself as a “consortium of research, industry and public-interest partners” dedicated to providing verifiable Internet performance and creating tools that help people “make sense of Internet performance.”

Google explains that the test takes “about 30 seconds” and a test in the United States uses about 9.4MB of data, while outside the U.S. it’s closer to 4.4MB. Data charges may apply.

Microsoft’s Bing already includes a built-in speed test (prompted by a search for “internet speed test”), and Google has perhaps decided it would rather not be the middleman to a growing number of similar services.

Speedtest.net is the most popular of these, according to Google Trends, and is for now the top result in a Google search.

In May, Netflix, a company whose business model depends on speedy connections—or least making sure consumers know who’s to blame when their program flickers off—launched an Internet speed test at Fast.com.

“Like the cellular data controls we recently introduced, fast.com is another tool consumers can use for greater insight and control of their Internet service,” David Fullagar, Netflix’s vice president of content delivery architecture, wrote in a May 16 blog post. “Fast.com works in any country, and it is free for everyone—whether a Netflix member or not.”

Wu added, “What we have seen in our investigation so far suggests that Time Warner Cable has earned the miserable reputation it enjoys among consumers.”

Charter has recognized that “significant work lies ahead” and has been bringing back to the United States thousands of customer service jobs that had been outsourced.

Charter offered in a June 10 blog post: “We will take the time, do the planning and devote the resources needed to make this transition as smooth as possible for our customers.”