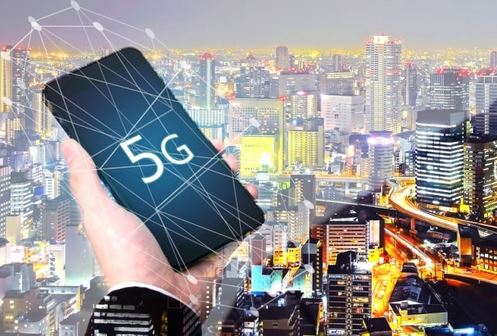 Fifth-generation wireless networking, or 5G, is the latest advance in a series of mobile standards that propelled early generations of cellular calls, text messaging, and touch-screen smartphones.

The network standard’s speed and flexibility is poised to unlock new scenarios for the long-promised industrial internet, enabling massive machine-to-machine communication and fast data analysis from sensor networks, vehicles, robots, and medical equipment. In automated factories, machines that report their states would be able to schedule maintenance before a breakdown, and engineers could control production elements using computer models and augmented reality.

5G networks in vehicles and alongside roads will let autonomous cars and trucks see road far ahead of them, overtake safely, and avoid obstacles. Robotic surgery will likely become more widespread.

Newly available radio frequencies, combined with 5G-capable chips and antennas, will deliver internet access speeds of up to more than 1 billion bits of information per second–about 20 times faster than LTE, the current standard.

As important as transmission speed will be 5G’s greatly improved latency, a measure of how quickly data makes the round trip from one device to another and back again. It’s nearly instantaneous in 5G, as fast as a thousandth of a second. For self-driving cars moving at highway speed, that would prevent one from rear-ending an auto that had just stopped for an inattentive cyclist, for example.

The impact can be staggering. On Germany’s A9 Autobahn between Nuremberg and Munich, where cars hurtle by at 140 mph and the high-speed Intercity Express train whizzes along a parallel stretch, mobile internet transmitters built using 5G standards let rail riders watch unbroken streaming video while at the same time, trains and tracks transmit real-time data about their condition while accelerating to 125 mph. The test network lets trains and roadway share data at railroad junctions to improve punctuality, while trains recognize obstacles, signals, and cars ahead, undisturbed even as entertainment apps tax the network.

Across the Atlantic, more than 30 American cities are due to get 5G service next year, making it so a new generation of phones and tablets can download a movie in about 17 seconds. In Tokyo, organizers of next summer’s Olympic games will blanket the city with the fast wireless technology, enabling high-resolution video streams of events to smartphones and cars and camera-equipped drones for aerial views.

“5G has a ton of potential,” said David Wilson, chief innovation officer at Bechtel, the $25.5 billion-a-year engineering and construction company. “We talk about this concept of a smart job site but it has to be robust. The shift into a digital future doesn’t just mean deploying sensors; we need to get better insights about people and tools.” Bechtel, based in Reston, Va., builds mining, rail, energy, communications, and aviation facilities in all corners of the globe, and is testing wirelessly linked cameras and sensors on construction sites that can warn heavy machines operators if a worker wanders in the way of a machine or heavy load, or safely shut the vehicle down. Sensors also transmit data on fuel use, temperature, and pressure so the company can better understand equipment’s productivity.

Using 5G, the networks could react more quickly and bring machine learning and computer object recognition into the mix. Cloud computing services paired with 5G-wired job sites could let machines predict where an errant worker might walk, or make instant decisions about operating parameters, Wilson said. General rollouts won’t be around the corner though. “We’re in the two- to three-year range, realistically,” he said.

In addition to faster transmission speeds and reaction times, 5G networks will let network operators create virtual “slices” or lanes dedicated to different uses. In the Deutsche Bahn’s test field, for example, a 5G slice configured for relatively low data volumes but enhanced reliability handles signals from trains and tracks, while another “slice” of the same network delivers high-throughput video to keep passengers entertained, at a lower priority level.

Although commercial deployments of 5G networking won’t come until 2020, spectrum auctions are happening and businesses are planning scenarios. Many manufacturers will likely build their own networks, tailoring throughput and reliability for their needs. Workloads that require lower latencies can be isolated from applications that don’t need as fast reaction times. “An enormous advantage of 5G is that companies can build out and use their own 5G networks. That way they’ll be independent of classical network providers,” observers from consultancy Roland Berger and think tank the Internet Economy Foundation wrote in a report last year. “Companies will decide how fast they want to built their network and how to configure it; they have all security aspects in their own hands.”

At Holo-Light, a Munich-based startup that supplies augmented reality visualization software to companies including BMW, Bosch, and Porsche, the faster networks could let field technicians unfamiliar with a piece of machinery repair it using computerized glasses that project illustrations and tips while an expert guides the process from afar, saving travel costs. “That doesn’t work today with 3G and 4G,” says Luis Bollinger, chief marketing officer at Holo-Light. “It’s not reliable.”

Business leaders need convincing that the new mobile standard can be strategic: 32 percent of 200 respondents to an EY survey of U.K. companies last November said 5G lacked relevance to their technology and business strategy.

To make 5G applications more strategic to manufacturers, some service providers including Korea Telecom are teaming up with Oracle to offer businesses 5G network authentication and data traffic management as a cloud computing service. That will let businesses set up machine-to-machine networks in their facilities, said Doug Suriano, general manager of Oracle’s communications business unit.

5G will bring two big changes to corporate computing: it will put cloud computing providers such as Oracle further into the telecommunications business as they host radio network slices in their data centers. And it will lead to development of new cloud applications with high-bandwidth computing at the network’s edge.

Bechtel’s Wilson sees 5G as being particularly beneficial for construction companies that want to operate their own local networks in remote locations where building cell towers or laying fibre-optic cable can be expensive or prone to damage. “We’ve had the separate components for a number of years, but with 5G the physical will blend with the digital to make connected job sites a reality.”

Aaron Ricadela, a first-time contributor to eWEEK, is a director of strategic communications at Oracle in Frankfurt, Germany. Previously he was a journalist in New York, San Francisco and Frankfurt covering the technology industry for BusinessWeek, Bloomberg News and InformationWeek.