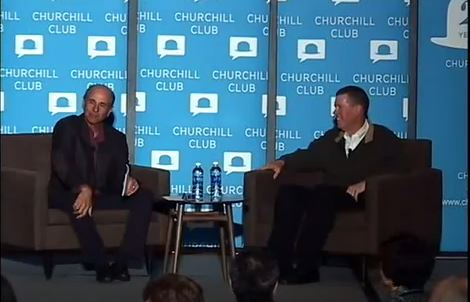 SANTA CLARA, Calif.–Would there be iPhones, iPads and iPods on the market today if Sun Microsystems had been able to close a deal to buy out Apple in the mid-1990s?

No, says former Sun CEO Scott McNealy. “If we had bought Apple, there wouldn’t have been iPods or iPads … I’d have screwed that up,” McNealy conceded in a talk Feb. 24 with another former Sun top executive, ex-President Ed Zander, at a Churchill Club dinner at the Santa Clara Convention Center.

McNealy (pictured, at right) and Zander (at left), headline speakers at the event, talked about their years at Sun when that company was one of the world’s top producers of servers, workstations, data storage systems and Unix data center software. It also had a healthy enterprise processor business with its Sparc architecture.

[Go here to view the entire 90-minute YouTube video of the Churchill Club conversation. Zander and McNealy discuss the failed Apple acquisition at the 38:12 mark.]

But there was a time when Sun, at its wealthiest, was poised to buy Apple when it was at the lowest point in its storied history.

“Back in late 1995 early ’96, when we were at our peak, we were literally hours away from buying Apple for about $5 or $6 a share,” said Zander, who had built Sun’s software business into a powerhouse and was rewarded with promotion to president by his mentor, McNealy.

McNealy: ‘We Wanted to Do It’

“We wanted to do it,” McNealy said. “There was an investment banker on the Apple side, an absolute disaster, and he basically blocked it. He put so many terms into the deal that we couldn’t afford to go do it.”

“Just think, that if that night had been different, I don’t know what would have happened,” Zander said.

However, in time Sun lost billions of dollars during a steady decline that continued for more than a decade after the dotcom boom collapsed in 2000-2001. During the boom Sun had been able to sell its servers and workstations for whatever the market would bear; $20,000 to $40,000 for a workstation or high-performance server were normal prices.

After the dotcom bust, lightly used Sun equipment became a glut in the market, and the company found itself getting squeezed on the high end by IBM equipment and on the low end by smaller, cheaper Intel-powered servers and storage arrays from Hewlett-Packard, Dell and many others.

When he fielded the inevitable question about “What happened?” Zander opted not to talk about it, saying instead that “we did what we did; we had some great successes and made some mistakes. We know that. But let’s not go there now. This is a celebration of sorts tonight and let’s leave it at that.”

Zander, who served as CEO of Sun (1998-2002) and of Motorola (2003-2008), asked most of the questions and offered some cogent thoughts on the development of IT, then and now. And McNealy, never one to be at a loss for a quip or joke, came through as expected with a number of funny-and sometimes surprising-lines.

For example, McNealy says Sun can take credit for developing the concept and fundamental elements of cloud computing.

“We invented all the elements of cloud computing at Sun. Remember, our tagline was ‘The network is the computer.’ We came up with TCP/IP, the first NFS (network file system), and Java. All those things are the basis for cloud computing today and they all still work really well.”

“Ken Olsen (who died on Feb. 6), who is one of the all-time thought leaders in IT, was co-founder of Digital Equipment Corporation (DEC). When DEC launched (in 1957), they called themselves ‘distributed computing,’ which was the first phrase for cloud computing.”

Sun Waited Too Long to Move to x86 Chips

McNealy also conceded that one of his biggest mistakes was that Sun waited too long to move to the Intel processor architecture for its servers.

“It was OK that we closed SunOS in the deal with AT&T and made it non-proprietary. But the problem we raised was we didn’t metal-wrap Solaris x86. We canceled it about 12 times in the press. My big mistake was, I thought that if we did software only that people would adopt it. What I didn’t realize was that they were terrified of us as a hardware supplier, so they weren’t going to do [use] our OS.

“If we had just grabbed the Intel Pentium chip and done a one-way and two-way pizza box with Solaris on it, Linux never would have happened. And we would have hit that whole next wave that was post-2000 and we would have had all the little startups.

“Google today would be running on Solaris if we hadn’t messed that one up. That’s the one big mulligan,” McNealy said.

Zander said no one was more surprised than the Sun leadership that the Java Web development language took off like it did in the mid-1990s. But Java reached the market in the midst of the explosive expansion of the Internet when developers were looking for new tools to rapidly build sophisticated new online applications.

“Java was passed around inside the company for many years, trying to find a place and an application. It would always come up as an expense, and no matter who was in the room, somebody would always say ‘Let’s kill it,'” Zander said. “When it was introduced at Moscone Center [at a 1995 press conference] as part of our new network suite, it was like third or fourth on the press release list, this little language called Java. But it hit it.”

McNealy said the decisive factor for Java’s success was “we were able to hook Java runtime onto the free, open source Netscape browser. And it was a collision of two things that accelerated and launched each other together. It was fascinatingly lucky timing for both companies.”

Since the Oracle buyout, McNealy retreated at least for the time being from the magnifying glass of shareholders, the media, analysts, government regulators and industry competitors. He playing golf and hockey, watching his four boys grow up, advising young companies (Hardcore Computer, EMC Greenplum, Curriki.org) and starting a soon-to-be-introduced software company.

Zander also is advising new companies and serving on a few boards of directors.