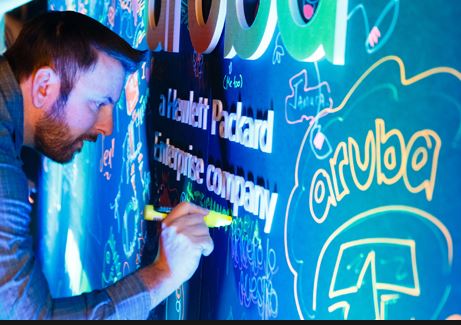 Aruba, a Hewlett-Packard Enterprise company, recently held its user conference, Atmosphere, in Las Vegas. One of the things I like about the show is that it’s one of the few events that’s hinged around mobility. Aruba’s portfolio is a combination of secure wired and wireless infrastructure, but the goal of the company is to help businesses navigate a journey to an environment where wireless hyperconnectivity is the norm driving the need for a highly secure, robust wireless edge and wired core.

Being a vendor-driven show, much of the focus was on Aruba products, but there’s also a wide range of industry discussion to help network professionals plan for the future. These were my top takeaways from the conference:

Takeaway No. 1: WiFi is without question critical infrastructure.

Business WiFi has long been treated a network of convenience. Historically, anything that required reliable and secure connectivity used a wire, but things have changed. During his keynote, Aruba founder and President Keerti Melkote discussed how we are in the experience economy. This means that customer experience (CX) is the top brand differentiator and WiFi plays a big role in ensuring an experience that delights. Many retailers, hospitals, schools, hotels, cities and other businesses are building services that are mobile centric. Good WiFi means customers, patients, students and others will use them. Bad WiFi means they seek alternative providers. An interesting proof point to support comes from ZK Research that found in 2017, two-thirds of millennials changed loyalties to a brand because of a bad customer experience. Rock-solid, high-quality WiFi is no longer a nice to have, it’s a must-have.

Takeaway No. 2: Network management must move to the cloud.

New APs and switches are always a bit part of Atmosphere, but the 2019 news included a new management product called ClearPass Device Insight, which was outlined in this eWEEK post by Jeff Burt. One of the interesting aspects of Device Insight is that it’s a SaaS-based service in which the data and analytics are done in the cloud. Over time, more network management features will shift into the cloud, not for convenience, but for necessity. Device Insight makes it easier to manage large-scale IoT environments, because it’s collecting a massive amount of data that requires machine learning to analyze.

On-premises systems do not have the capacity, scale or compute power to do this effectively. I understand the use of cloud might make some network professionals nervous, but the reality is the future of network management is ML and artificial intelligence, because it’s the only way to connect the dots in the huge volumes of data fast enough to be effective.

Takeaway No. 3: The access edge needs to be unified.

For years, network managers treated the wired and wireless networks as separate domains often procuring infrastructure from different vendors. The problem with this model is that configurations, policies and security features can vary from vendor to vendor, creating inconsistencies that can be exploited.

For example, it’s very common to be at a business where the WiFi network is locked down from guests. That non-employee can easily unplug the Ethernet cable from the back of the IP phone and gain access to the entire network. Even if policies are the same in one point in time, it’s very difficult to keep the wired and wireless network in sync with each other as the environment changes. It’s often said that wireless needs to act a lot more like wired with respect to reliability, and that’s true. The converse is now true where the wired network needs to have the same level of security as wireless. The only way to ensure consistent performance and security is from having unified management. At the show, Aruba demonstrated ClearPass Policy Manager and Dynamic Segmentation that act as a single pane of glass for the automation of security and management features.

Takeaway No. 4: WiFi6 and 5G are complimentary.

Mobile World Congress was held earlier this year in Barcelona. The hype around 5G was off the charts and rivaled Hulk-a-mania when the WWE was at its peak. There’s currently a fair amount of rhetoric around the myth that 5G will kill WiFi. I use the term “myth” because it’s impractical to replace WiFi with 5G in most cases. Recall that when 4G was being rolled out, it was supposed to be the death knell of WiFi, but that never happened. There are some use cases, such as a retail point of sales device where it might make sense to use 5G instead of WiFi, but as soon as multiple devices need to be connected, it doesn’t make sense to connect each of them using 5G, because each connection would need to be managed. I believe it’s more likely that 5G will actually give WiFi as boost as point to point 5G enables network services to be delivered into places where it would have been impractical to run cables. At the termination point, WiFi can be used to connect multiple devices.

Also, the new APs that Jeff Burt wrote about are about more than WiFi6. In addition to the new standard of WiFi, they also include Zigbee and Bluetooth 5 (includes BLE) connectivity, making them ideal for IoT. Without those protocols, companies would need to connect the Zigbee and Bluetooth 5 devices to a gateway which would interface with WiFi. For all the hype around 5G, about 75% of all IoT devices connect today are using WiFi, Zigbee or BLE. This kind of gateway capability isn’t something that 5G could offer cost effectively.

HPE’s success with acquisitions has been spotty at best. Compaq, 3Com, Autonomy and others weren’t exactly smashing successes, causing many Aruba customers a fair bit of angst when the acquisition was announced. When the purchase was completed, HPE smartly rolled the wired Procurve business into Aruba and let Keerti Melkoti and team run it. Since then, the business has flourished and grown its revenues from $2 billion to $3 billion. Customers I’ve talked to have told me the service and support remains excellent, and they’re buying a broader mix of products from the company.

Aruba’s ability to keep its competitive edge is interesting, because so many other WiFi vendors have come and gone. Meru, Ruckus, Xirrus and others had short periods of technology leadership that were based on RF quality. Those eventually got rolled into the standard, eliminating the advantage. For example, Ruckus’ BeamFlex gave it a short-term competitive advantage, but Beam Forming is part of every WiFi vendor’s feature set today.

Aruba’s competitive differentiation has been in many areas, but its security prowess has always set it apart. I’ve stated on many occasions that Aruba is actually a security vendor that’s dressed up in WiFi clothing. At Atmosphere 2019, the company had many security capabilities on display, including the previously mentioned Device Insights as well as segmentation, authentication, firewall and other capabilities. HPE may have been the acquirer but all the innovation is still colored Aruba orange, and I don’t expect that to change any time soon.

Takeaway No. 6: Honorable mention: SD-Branch is the next wave of SD-WAN.

Aruba isn’t traditionally thought of as an SD-WAN vendor, but there were many sessions on the topic at Atmosphere. Despite being a late entrant, Aruba’s SD-Branch solution is a strong offering that allows it to go toe-to-toe with any other vendor, particularly if the needs of the branch are being considered as well as transport. I won’t go into too much detail on Aruba’s solution, because I covered it comprehensively in this post.