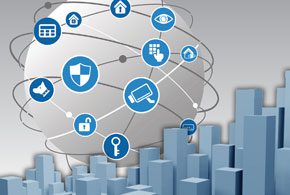 Microsoft wants to build a new “world graph,” an index of devices and objects, their locations, and how they are interconnected. Using the graph, the company envisions that internet of things (IoT), smart city and connected car technology providers will incorporate location-based data into their platforms, enabling a new generation of intelligent services with a sense of place.

To move the process along, it has partnered with leading mapping technology companies, namely TomTom, HERE and Esri the software giant announced.

This will enable developers to build location-aware applications for the enterprise, in addition to cloud-enabled software for the web, mobile devices and the IoT.

Currently, HERE powers the location data capabilities in a number of Microsoft products, Windows, Office, Cortana and Bing. HERE’s technology also filters down to third-party developers and businesses via the Bing Maps API.

The expanded agreement “means that Microsoft will have access to the most up-to-date, accurate maps available,” wrote HERE blogger Jamie Stevenson. “It will also benefit from HERE platform services such as real-time road traffic flow and live public transit data.”

Microsoft has high hopes for the new collaborations.

“Scenarios could include connected cars that combine up-to-date mapping, traffic and weather data with a driver’s schedule, to-do lists and preferences for personalized planning and routing,” Dallas said. “Intelligent cars could re-route away from accidents, recommend nearby restaurants and find commutes with good cell coverage for work calls,” and use data from onboard sensors to enable predictive maintenance, enhancing vehicle safety and potentially saving lives on the road.

On the business front, Microsoft foresees using its world graph to help companies monitor customer engagements, optimize their vehicle fleets and hone their logistics management skills, Dallas added. Smart cities could use the technology to analyze traffic and take measures to prevent gridlock.

Microsoft isn’t the only technology heavyweight that’s stepping up its mapping game.

Apple is reportedly gathering a team of robotics and location data specialists to help the company improve its Map app and related services. In September, Google added a bevy of new voice commands to its Map app, allowing drivers to access more functions without taking their hands off the wheel. Users of the updated app can now ask the app to show alternate routes, hide the traffic overlay and mute voice guidance, among several other new commands.