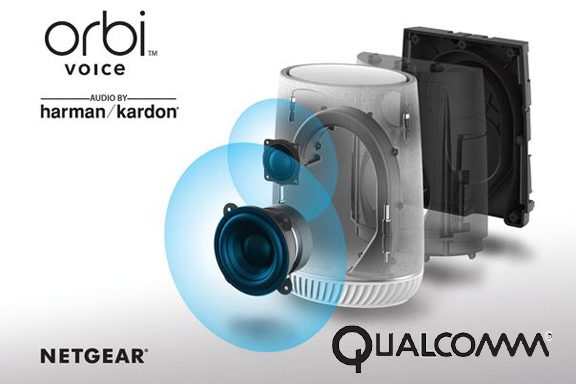 Qualcomm and Netgear on Aug. 30 introduced a new voice-activated smart-speaker device, called Netgear Orbi Voice, that is similar to Alexa, Siri and Google in that it understands speech and can carry out requests.

But there’s a big difference: This one is part of a WiFi mesh network that actually strengthens itself and becomes more powerful as new plugged-in devices are connected to it.

This is an example of the “network effect” as was originally intended; the more power that’s in the network, the stronger the network connections are supposed to become.

Netgear Orbi Voice is built on the Qualcomm Mesh Networking platform and features home or office WiFi coverage of up to 4,500 square feet. WiFi dead spots do not exist in the network. This smart speaker features high-end audio by Harman Kardon and built-in Amazon voice-assistant capability, which makes it intuitive for controlling connected gadgets, queueing up music, checking traffic or weather, or buying something—all using voice command.

“In a mesh WiFi network, whether in an enterprise or home environment, there’s a box connected to the router or gateway to make an ISP (internet service provider) access point,” Ignacio Contreras, Qualcomm Director of IoT Marketing an Analyst Relations, told eWEEK. “You plug in some small satellite devices throughout the office or home so they have a wireless connection among themselves. They have intelligence in them; if one of the devices gets disconnected, the network can detect that and immediately start serving devices using another configuration.

“It’s the same thing with enterprise WiFi; we’re used to that. But those are hundreds-of-thousands-of-dollars systems.”

Qualcomm and other companies have been advocates for how and why mesh networking and advanced voice features could and should converge, Contreras said.

Cognitive artificial intelligence and machine learning can be deployed on the Qualcomm Mesh Networking platform. Devices such as set-top boxes, TVs, thermostats and smart speakers will play a central role as the hearing, sensing and responding devices of the cognitive office or home, Contreras said.

First in a New Class of Connected Devices

“A platform that connects most of the devices in a location and expertly manages their performance, should rightly support simple methods of control like voice,” Contreras wrote in a blogpost. “But Netgear’s Orbi Voice is the first in a class of products that goes further, blurring the line separating networking and client device ecosystems.

“This is a truly innovative leap and the start of a trend we expect to accelerate in the 5G era, as the symmetrical distribution of wireless connectivity becomes so important to delivering cognitive smart home experiences.”

Orbi Pro for Business will be available for distribution this fall. You can put in an order here.