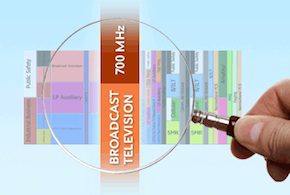 T-Mobile has shot back at rival Verizon Communications, undoing assertions the latter made in a Sept. 18 letter to the Federal Communications Commission (FCC) and discrediting the report Verizon submitted, calling it rich with “erroneous assumptions” and suggesting that its author, a former FCC chief economist and a professor of economics at Duke University, has swayed her position to align it with that of her report’s sponsor, Verizon.

In an Oct. 17 letter to the FCC, T-Mobile also wrote that the Verizon report’s assertions “depend on straw men arguments that overlook key elements of the proposed spectrum-aggregation limits.”

Tensions are rising around the upcoming federal spectrum auctions to be hosted by the FCC, which has yet to determine whether it will impose limits on the amount of wireless spectrum—an essential but incredibly limited resource for the wireless carriers—that any one carrier can purchase.

A tug of war is being fought between market leaders Verizon and AT&T and smaller carriers T-Mobile and Sprint, which, with even smaller rivals, fear that without limits in place, Verizon and AT&T will have a buying spree. With spectrum hard to come by and auctions incredibly rare, those who don’t acquire needed spectrum at the auction will be at a considerable disadvantage for the foreseeable future, and be unable to compete in a very competitive market, the thinking goes on one side.

On the other side, an ambition of the auction is to raise money, and without caps in place, say Verizon and AT&T, the FCC will make more money.

Verizon, in its Sept. 18 letter accompanying the report by Dr. Leslie Marx, says Marx demonstrates the lack of evidence to support the idea that some carriers are at risk of being muscled out of the bidding and shows that some of these same carriers have “repeatedly passed on opportunities to acquire that spectrum at auction and on the secondary market.”

In a nine-page rebuttal on behalf of T-Mobile, counsel Trey Hanbury wrote, among other things, that “low-frequency spectrum is highly illiquid and fragmented” and “national footprints are unavailable outside of the auction environment”; that Marx seems confused about the difference between network capacity and coverage; that anonymous bidding will not prevent collusion or coordination (between AT&T and Verizon); that reasonable limits can increase carrier participation in the auction and revenue generated; and that Marx offers “historical analogies and simulations” that are “contradicted by her own prior work or rely on misleading or wholly inapt comparisons.”

Spectrum, unlike timber, “cannot be grown or imported,” wrote Hanbury, referring to one of Marx’s examples.

“Professor Marx’s analysis also ignores the potential for smaller bidders to limit their participation in the face of foreclosing dominant incumbents,” Hanbury continued. “Adopting spectrum-aggregation limits will actually increase participation, which should, as Professor Marx has predicted in papers not sponsored by Verizon, enhance auction revenues.”

T-Mobile has proposed a Dynamic Market Rule, which would, it explained in a June 21 FCC filing, put limits in place. Should the bids, with the limits, fail to reach the Commission’s revenue targets, they could be lifted.

Gregory Rosston, deputy director of the Stanford Institute for Economic Policy, who has spoken on behalf of T-Mobile, has said the DMR could enable the auction to make actually even more money than without limits and described the DMR as an “insurance plan” of sorts.

T-Mobile, in a Sept. 26 letter to the FCC, also proposed a “one-third limit” rule, in which any carrier could acquire spectrum below 1GHz (sub-1GHz spectrum is prized for its ability to best offer cellular coverage deep within buildings), but not more than one-third of the total available amount in any area. Under this proposal, AT&T and Verizon would be eligible to purchase sub-1GHz spectrum in all 10 major markets, with the one exception of AT&T in Dallas, where its holdings are already substantial, according to T-Mobile.

The FCC is likely to put its auction rules in place once its next chairperson is settled in. In March, Julius Genachowski announced his plan to retire from the position, and in May, President Obama nominated Tom Wheeler for the position.

“Something that big and important,” Harold Feld, senior vice president of consumer advocacy group Public Knowledge, has told eWEEK, in regard to setting the auction’s rules, “is not something an acting chair would do.”