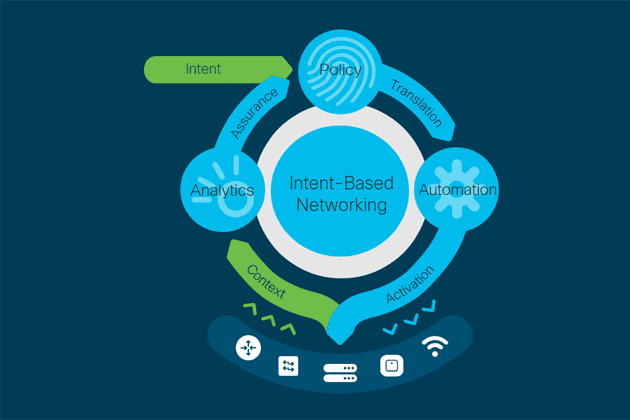 The one thing that has been consistent about the networking industry over the past several decades is change.  The latest innovation to come to the network is the concept of an Intent Based Network (IBN). The term has actually been around about a decade but has recently gone mainstream because Cisco Systems has been evangelizing it.

However, Cisco isn’t the only IBN vendor today; Apstra, Veriflow, Huawei and other companies have made announcements in this area.  Over time, I’m expecting all vendors to offer an IBN solution, although some may choose not to use the “intent” term. But the end goal of an autonomous network will be the same.

The high-level vision of an IBN network is simple: It’s a network that runs itself based on the intent of a given set of commands. However, what this means and how this works isn’t obvious, so I thought I would take the time to explain it and all the implications to network professionals.

The best way to describe an IBN is that it’s a closed-loop, autonomous system. This means it’s self-operating and requires no human input. A good analogy is to consider the difference between a self-driving car and automation features. Newer cars are loaded with automation capabilities, such as parallel park assist–with which a car can park itself. However, the operator of the vehicle needs to make the decision to park in that spot.

IBN Has Automation Capabilities, but Network Engineer Chooses Them

Similarly, modernized network infrastructure has better automation capabilities, but the network engineer still needs to make the decision as to what tasks to automate and when.

An autonomous vehicle is actually an intent-based system. The driver would issue the command “drive me home,” and the vehicle would use automation technology to complete the task without violating any rules in place.

As an example, if street parking was allowed, it would use the parallel-parking capabilities to park the car as the human would have. If it was not allowed on Wednesday night because of street cleaning, the system would know that and move somewhere else. This can help avoid an error that was overlooked by the operator. The key is that it uses automation capabilities to ensure the intent of the command “drive me home” is met while obeying all rules and laws.

With a network, an engineer could issue a command like “keep all medical devices in a secure segment,” and the network would ensure that happens. This would involve scanning the networking, finding the devices creating the secure segment and placing the medical endpoints in it.

If a clinician moves a heart pump to another part of the hospital where it is now outside of the segment, the network would automate the reconfiguration of the network to ensure that the intent of the command isn’t violated.  Doing this manually in a highly dynamic environment is difficult if not impossible, because people just can’t work fast enough to ensure compliance with business policies 100 percent of the time. Machines, however, can do this.

Will IBNs Eliminate Jobs? Not Necessarily

Think of how much more productive people would be if they could use their time spent in a car to work.  Similarly, if tasks like creating VLANs, updating ACLs, checking logs and other things can be automated, the engineer can be more productive. I agree that if one’s job is strictly to execute these tasks, the job is at risk, but there is no network professional that should not want to elevate their role above this.

My general rule of thumb with IT professionals today is that if they are doing things that aren’t strategic to their company or their resume, find a way to automate them, and an IBN is the mechanism to do this with networks.

From a CIO perspective, this should be a no-brainer. High-level engineers are expensive and should be used to drive innovation. With legacy operations, many spend more than half of their time working on day-to-day issues. IBN changes that paradigm.

The following are the key attributes of an IBN:

Intent-based networking is the biggest evolutionary step in networking ever, because it will make the network highly dynamic, agile and more secure.

During the next several years, the industry will see a rise IBN vendors; some that address part of the solution and others that are end to end.

While I don’t expect businesses to embrace full IBN solutions tomorrow, I do expect companies to use aspects of it to improve operations. The first step in this is understanding what intent-based means and then using that vision as the guiding principal for network evolution.