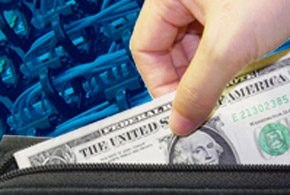 Verizon and AT&T reportedly are putting together a bid to buy Vodafone.

According to the Financial Times blog Alphaville, Verizon would acquire Vodafone’s 45 percent stake in Verizon Wireless, and Vodafone’s extensive business outside of the United States would go to AT&T.

Vodafone Group has more than 407 million customers and operators in more than 30 countries across five continents.

According to the April 2 report, Verizon and AT&T could pay approximately $3.95 a share—a 40 percent premium on Vodafone’s April 1 stock price—lifting Vodafone’s value to $245 billion. If this turns out to be the case, it would make it the largest mergers and acquisitions (M&A) deal on record.

It has also been rumored that Verizon could more simply buy Vodafone’s share of Verizon Wireless, though John Hempton, chief investment officer at hedge fund Bronte, has argued that that scenario makes less fiscal sense.

The Alphaville report sent Vodafone’s stock price soaring April 2 by as much as 6 percent. In January, at the 2013 Consumer Electronics Show, the stock had similarly jumped nearly 3 percent, after Verizon CEO Lowell McAdam said Verizon was considering a buyout of Verizon Wireless.

In February, Cnet reported, Vodafone CEO Vittorio Colao further prompted speculation when he told the The Wall Street Journal that his company was keeping an open mind “on everything.”

With smartphone sales gradually slowing amid sales saturation, the deal would be a boon to AT&T, which has been rumored to be considering an acquisition abroad.

The Wall Street Journal reported in January that a purchase in Europe would help AT&T “escape constraints on growth at home” and enable it to offer upgraded technologies in Europe and more lucrative pricing strategies.

Gartner analyst Phillip Redman told eWEEK that the sharing of infrastructure is becoming more common, especially outside the United States, and in a high-capital market like wireless, “it can make a lot of sense.”

Still, Redman said the likeliness of the deal coming together—and it would be a very complicated one—is limited. He noted that it’s also not ideal for Verizon to have AT&T, the second-largest carrier in the United States and Verizon Wireless’s major competitor, in a deal with it—certainly no better than having Vodafone. It would make more sense if Vodafone “sold it to Verizon full out,” Redman said.

Given Verizon’s size and might, “they could put together the value, but on the business side, it doesn’t make as much sense.”

For Vodafone, the deal would be great—a potential 10-times return on its original investment.

“They could use that capital to maybe go after T-Mobile or Sprint—they’d rather have total ownership of a business than partial, like they have with Verizon Wireless,” Redman said.

But again, the potential price tag on the deal made him doubtful. “It depends on what the figure would be.”

Philip Kendall, director of Strategy Analytics’ wireless operator strategies, said that “there have been numerous versions of this over the last 10 years, none of which have materialized, so it’s important not to get too carried away at this stage.”

That said, the deal would make great sense for Vodafone, which is “quite pragmatic” in terms of its willingness to consider alternative situations and its understanding of the currently challenging macroeconomic situation in the EU, Kendall told eWEEK.

A Verizon Wireless breakup is realistic in that it makes some sense for the parties involved, he said.

“It is also realistic,” he continued, “from a regulator/competition authority perspective—very few deals of this size could happen in the global mobile market without there being some level of footprint overlap that needed to be unraveled, so it is almost unique in its simplicity from that perspective.”

The main issue Strategy Analytics has with the deal, Kendall added, is “it is just the latest rumor about Vodafone and Verizon.”