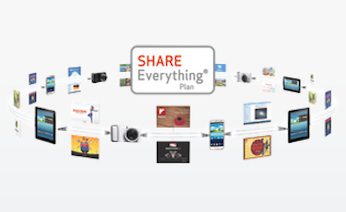 Verizon Communications on April 18 announced first-quarter 2013 results that were a marked improvement from the more than $4 billion loss it suffered the quarter before, in part due to Hurricane Sandy.

Verizon Wireless, its joint venture with Vodafone, posted total revenue of $19.5 billion, service revenue that grew nearly 9 percent year-over-year to $16.7 billion and EBITDA—earnings before interest, taxes, depreciation and amortization—that was the highest in the company’s history.

It also added 720,000 new subscribers, 677,000 of which were postpaid—signing up for new two-year contracts—bringing its total retail postpaid accounts to 34.9 million.

Verizon Wireless activated 7.2 million smartphones during the quarter, 4 million of which were Apple iPhones. Of those iPhones, half of them were running on Verizon’s 4G Long Term Evolution (LTE) network, while the other half remained on 3G.

It finished the quarter with a smartphone penetration of 63 percent and an LTE network that now covers 95 percent of its 3G footprint. Its 4G network now covers 287 million people in 491 markets—by far the industry high. (AT&T now has LTE in 182 markets, while LTE newcomer T-Mobile has only seven markets.)

“Our strategic focus is on building networks and platforms … to take advantage of growth opportunities in broadband, video and cloud service,” Verizon Chief Financial Officer Fran Shammo said during the call.

Launching into a discussion of Verizon Wireless’ Share Everything data plans, Shammo also said that Verizon’s approach is to “meet customer needs by delivering products and services in the most efficient way.”

The plans, he continued, make it easier for customers to upgrade and add devices. And indeed, the carrier’s average revenue per account—a change from the average revenue per user that it used to measure—rose nearly 7 percent annually to $150.27 per month.

In late January, the carrier extended its Share plans to small businesses, enabling them to connect up to 25 devices to a single account, and Shammo said the offer has resulted in the consolidation of accounts.

In a market in which the possibilities for bundling—combined offers of Internet, television content and telephone services—are becoming increasingly desirable, Verizon also grew its FiOS business, adding 188,000 FiOS Internet connections and 169,000 new FiOS Video connections during the quarter.

“Verizon is firing on all cylinders,” Roger Entner, lead analyst and founder of Recon Analytics, said in response to the earnings announcement.

“In an increasingly saturated market, the company is accelerating subscriber, revenue and profit growth,” Entner continued. “The Share Everything plan is being received enthusiastically by consumers [and] FiOS continues to make inroads in the Internet and video markets, taking away share from the cable companies.”

The latter option, it has been argued, would be far more tax-efficient—”tens of billions of dollars more efficient,” according to John Hempton, chief investment officer at hedge fund Bronte.

Shammo said during the call, regarding a purchase of Vodafone’s share, “We are extremely confident that it could be accomplished in a manner that is very tax-efficient.”