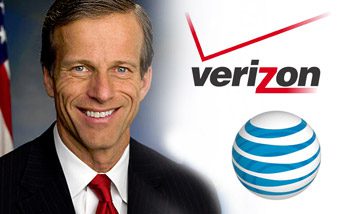 While AT&T and Verizon may be interested in faith and families, they’re also interested in Thune, the South Dakota Republican who has a hand in how the Federal Communications Commission’s 2014 spectrum auctions will play out.

The maneuverings taking place ahead of the auction, to determine what its rules will be, seem about as straightforward and well-intentioned as a House of Cards storyline.

The auction will be the first of its kind in the world, and the stakes are high. The FCC is expecting sales to exceed $15 billion. For the wireless carriers, spectrum is the lifeblood of their livelihood, and low-frequency spectrum, which the auction will include, is the difference between having a network that consumers complain about and a network that they switch to.

AT&T and Verizon Wireless, given their deep pockets, are hoping for a spectrum shopping spree, while smaller carriers Sprint, T-Mobile, C Spire and others are working to put some limits on how much any one shopper will be able to walk away with.

“As the top Republican on the Commerce Committee, which oversees communications policy, Thune … is in a position to hold up legislation or block President Barack Obama’s nominees to the [FCC], which will run the auction,” said the Bloomberg report.

Bloomberg also cited Bill Allison, editorial director of the Sunlight Foundation, a group that promotes transparency in government. “That’s why [AT&T and Verizon Wireless] are holding the event, so they can reach out and touch him,” said Allison.

Thune told Bloomberg in an interview that to maximize the revenue return of the auction, everybody should be able to compete. “There shouldn’t be all these conditions imposed from on top, which is kind of what the administration is trying to do.”

What the Administration Is Trying to Do

Thune’s comment is consistent with an April 19 letter that six House Republicans wrote to the FCC to express their disagreement with the U.S. Department of Justice’s recommendations on how the auction should be handled.

When Congress authorized the Spectrum Act to conduct the auctions of television broadcast spectrum, they wrote, “We certainly wanted the Commission to design an auction that would make more spectrum available to wireless carriers to meet soaring demand for mobile broadband use. But … we also expected the incentive auction to generate sufficient revenues to compensate television broadcasters that wish to voluntarily relinquish spectrum. … The DOJ submission appears oblivious to these multiple goals.”

Therefore, it continued, “the Department concludes that rules that ensure the smaller nationwide networks, which currently lack substantial low-frequency spectrum, have an opportunity to acquire such spectrum could improve the competitive dynamic among nationwide carriers and benefit consumers.”

House Democrats wrote their own April 19 letter to the FCC, saying that the Republicans’ letter “included a number of inaccuracies and omissions,” particularly in regard to the spectrum provision in the Middle Class Tax Relief and Job Creation Act of 2012, and that generating sufficient revenue from the auction and protecting wireless competition “are not mutually exclusive.”

They added that the expertise the DOJ gained “in reviewing mergers involving the telecommunications industry and other transactions” gives it a solid basis for its views.

In 2011, after approximately nine months of reviewing paperwork, the FCC blocked AT&T’s bid to merge with T-Mobile, saying that the size of the combined companies would have a devastating effect on competition in the market, which would ultimately hurt consumers.

Clearly, responses to the issue run party lines. According to Bloomberg, the six Republicans who wrote the FCC have this year have received $45,000 from AT&T and Verizon PACs, and the six Democrats who wrote have this year received $27,000 from Sprint and T-Mobile PACs.

How the Next FCC Chair Will Affect the Spectrum Auction

Julius Genachowski announced in April that he was stepping down as chairman of the FCC. President Obama tapped telecom industry insider Tom Wheeler to be the new chairman and Commissioner Mignon Clyburn to be the acting chair while the Senate vets Wheeler.

Clyburn’s new title became official Saturday, May 18, and on May 20 she had a letter on her desk from T-Mobile, Sprint and others, asking her to perform a “thorough and comprehensive review and update” of the auction’s rules.

The auction rules, however, will have to wait for the new chair, whether that’s Wheeler or someone else.

Verizon Wireless, AT&T Back Senator With a Hand in Spectrum Auction

“Something that big and important is not something than an acting chair would do,” Harold Feld, senior vice president of consumer advocacy group Public Knowledge, told eWEEK.

Feld said the FCC is ready to order privacy protections for smartphones, which is something Clyburn can take on.

“It’s certainly controversial, but it’s well-defined, and something where the record is complete,” he said. “It’s important, but it’s not going to change the shape of the world.”

Regarding the push-and-pull over whether to put limits in place, Feld said that past auctions offer a lesson.

“AT&T and Verizon are the most well-funded and they can win any license they want to win. But if there are no restrictions on what they can bid on, the others aren’t going to bother to show up,” he said. “It’s expensive to come and play in these things. … There’s a big entry fee; they set up war rooms. If you think you’re not going to get what you need, you’re going to think twice about spending a few million to get in.”

If the carriers don’t show up, the FCC’s potential winnings are reduced.

Another challenge is the structure of the auction. There’s a forward auction, in which the broadcasters offer what they’re willing to offer, and then a reverse auction will follow, where carriers can see where they stand and make certain requests.

“People say, ‘How much do you think we’re going to clear?'” said Feld. “You can give the broadcasters more money to give up more spectrum, but then you’re giving the government less money. … It’s all a very, very complicated matter.”

For that reason and others, nothing is going to be decided this summer.

“This is complicated, this is hard … and there are so many pieces. No one is expecting the [FCC] staff to have a plan to circulate until the fall,” said Feld. “There are broad things people agree on, but there is no consensus right now.”