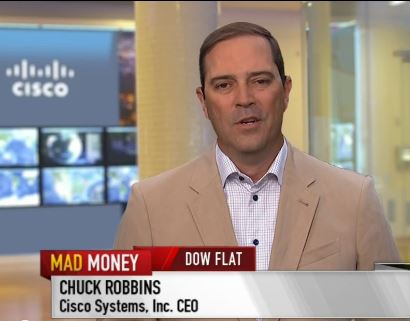 The date July 26, 2015 was a notable day in history for a number of reasons. President Barack Obama became the first sitting U.S. president to visit the East African country of Ethiopia. In the world of sports, Aussie Jason Day won the RBC Canadian Open, disappointing all of Canada as he beat Canadian David Hearn by two shots. In the IT business world, July 26, 2015 was the date Chuck Robbins became CEO of Cisco Systems, ending the 20-year tenure of John Chambers, who had one of the best CEO runs in history.

Succeeding Chambers certainly was certainly not an easy task. “JC Superstar,” as he was known in some circles, had reached pseudo-celebrity status and was incredibly popular inside and outside of Cisco. The company had a number of people who were dubbed the heir apparent, but Robbins beat them all out and stepped into one of the most visible roles in the business world.

When Robbins took over, the company was in need of its second act. The company wasn’t exactly struggling, because it was a near-$50 billion company with a ~60% gross margin. But it was seeing some significant challenges, including commoditization of the network, cannibalization by the cloud and a number of new start-ups that came to market as software-defined networking moved from a promise to reality. The company was certainly healthy, but its future was certainly in doubt. Evidence of this is that its stock price had hovered in the low-to-mid $20s for a couple of years. CSCO was selling at $47.67 on Aug. 4.

If one had to assign a letter grade to Robbins’ first five years, an A would certainly be in order. The stock has reached a high not seen since the dot-com-crazy late ‘90s, product gross margins are now in the mid 60% range, and the network business has seen a rebirth.

How did he do this? There were five key accomplishments that lead to Cisco’s success in the Robbins era.

1. Culture change. Cisco has always had a strong culture of trying to make the world a better place, but Robbins has taken the company’s corporate social responsibility to an entirely different level. Historically, Cisco has been very active in trying to level the global playing field by bringing internet connectivity to third-world countries and through programs such as Networking Academy. During the past half-decade, Cisco has raised its visibility as a corporate citizen by getting involved or leading programs such as Global Citizen and Destination: Home. In 2016, Cisco set a goal of positively impacting 1 billion people by 2025, and hitting that lofty goal requires every employee to embrace this mission.

In 2020, Cisco changed its purpose to be more reflective of its desire to make a significant societal impact. Until 2020, Cisco said its purpose had been to use the network to change the way we “work, live, learn and play” and the internet has certainly done that. During his opening keynote and virtual Cisco Live–the company’s annual end user and customer event–Robbins reaffirmed Cisco’s commitment with the new purpose statement of “To Power an Incluse Future for All.” The desire to change the world has created a focus for every employee. It’s not just corporate fluff, it’s real and that starts with the person on top–and that’s Robbins.

One employee I talked to summed it up nicely:

“Under Chuck, Cisco has evolved to be more socially conscious. The company is more open, honest and inclusive. There are honest and authentic conversations around sensitive issues at company meetings. Since COVID-19, he and his leadership team dedicate over an hour a week talking and listening to employees.”

#WeAreCisco isn’t just a hashtag for social media. It means something.

2. Doing what’s right for the customer. In the first meeting I had with Robbins as CEO, I asked him about the company’s slowness in embracing software-defined networking (SDN). To my surprise, he didn’t give me any kind of company spin about how they really didn’t miss the market but were trying to time it or something. Instead, he confessed that Cisco did look at SDNs as a threat to their business and were dismissive of it early in the cycle. He also told me that Cisco would never again do that. If there is a trend that’s good for customers, Cisco wants to lead that transition, and he has held true to that promise through a combination of in-house innovation and acquisitions. SD-WANs were highly disruptive to Cisco’s router business, but despite that it acquired Viptela early in the development of the market. It also brought to market its Intent Based Networking (IBN) plan and related products even though the automation capabilities could be viewed as a threat to the Cisco buyer.

3. Re-ignited the network business. For as long as there have been networks, there has been Cisco. The company has been the de facto standard for decades, but one of the big hurdles facing Robbins was that margins were slipping as the “c” word (commoditization) was being thrown around, which is logical, because networking is very mature. It also was facing stiff pressure from Huawei, white boxes and the previously mentioned SDx trend.

I’m a firm believer that nothing is really a commodity as long as the maker of the thing can bring significant-enough differentiation and that’s what Cisco has done over the past few years. While the fully autonomous network that Cisco touts is still a number of years away, there are a number of IBN features that can help customers today. One of the most significant is Encrypted Traffic Analytics (ETA) that helps spot malware in encrypted traffic by leveraging artificial intelligence. This is something that has never been done before.

This feature and others operate on all the new Catalyst products including the 9000 series, which is the new flagship line, replacing the widely deployed Catalyst 6000. The network is not a commodity and Cisco is doing an effective job delivering features to stay ahead of the “good enough” curve.

4. Relevancy to cloud. I do a fair bit of work with Wall Street analysts, and many “bears” viewed the cloud as a threat to Cisco. The fear was that as businesses adopted public cloud services, they would not need to invest in high-performance enterprise networks. This was one of the main reasons Cisco’s stock price relative to its profitability and revenue was so low. Other vendors, such as Arista, that were thought to have a more direct relationship to cloud growth saw their multiples on stock price skyrocket.

Cisco finally has a sound strategy in the area of cloud, and the stock price has grown accordingly. Cisco is in a unique position to bridge the gap between the enterprise network and cloud providers and offer a set of network and security services that can span an increasingly multi-cloud world.

While it’s true the cloud providers do offer their own services, those only work within that specific environment. For example, Amazon security does a great job of securing Amazon workloads but can’t protect Azure data stores. Cisco can become that network and security “service mesh” that can span all the clouds. As a multi-cloud player, and in the future, distributed cloud–which includes edge computing–becomes more widely adopted, Cisco has an excellent opportunity to help customers with that transition.

5. Faster execution. Cisco has always had the goal of moving fast to capitalize on market transitions, but under Robbins, the company has accelerated its ability even more to change quickly. The change agents for this have been two hires by Robbins: EVP of Sales and Marketing Geri Elliott and EVP and Chief Customer Experience Officer, Maria Martinez. These two came into the company around the same time and have stepped on the execution gas pedal.

I recall a roundtable with Robbins about a year after the pair started and he said he thought Cisco executed fast before, but he realizes there was an entirely new level that the combination of Martinez and Elliott brought into Cisco.

Under their leadership, Cisco has completely revamped its services business, focusing more on customer success, changed its channel programs and restructured the executive leadership team to align with current trends. It was also able to send 70,000 workers home and not skip a beat with the COVID-19 pandemic hit. Don’t expect the Cisco that exists today to look the same in five years. Constant change is Cisco’s norm, and that’s remarkable given the size of the company (76,000 FTEs).

Areas for Robbins to focus on for the next five years

No leader is perfect, and there are still a few areas that need attention by Robbins. The company still needs a better internet of things story. About a decade ago, Cisco was the biggest evangelist of IoT, touting an economic impact of $19 trillion. Then, it went quiet for a while, and its role in IoT became unclear. Recently it’s verticalized its approach to address the needs of different industries. Cisco IoT is evolving along with the market, which is largely fragmented. What still remains unclear is how big an impact this can have to Cisco and how it shapes product direction.

It also hasn’t become the de facto standard in security, although the potential has been there for years. Its SecureX platform brings together many of the security capabilities Cisco has to make breach detection faster. Cisco needs to build on SecureX to drive a story that includes the network. Given the size of the security market, Cisco’s ability to gain even a few points of share is the biggest needle-moving opportunity it has.

Additionally, it launched some new small business products under the brand name of Cisco Designed, which is a mix of Meraki and purpose-built products, which can be confusing. The initial launch of Cisco Designed was a strong one, but evolving this product line will pay big dividends in another market with no de facto leader.

Another area that needs more attention is its cloud strategy. What I highlighted above is a great starting point, but the term “cloud” is becoming increasingly broad, and Cisco needs to adjust with it.

All in all, the first five years of Robbins as CEO has been a resounding success. It seems he’s changed everything, and given the company’s willingness to disrupt itself, I would expect to see a similar trend over the next five years.