1Channel Products of the Year Channel Products of the Year 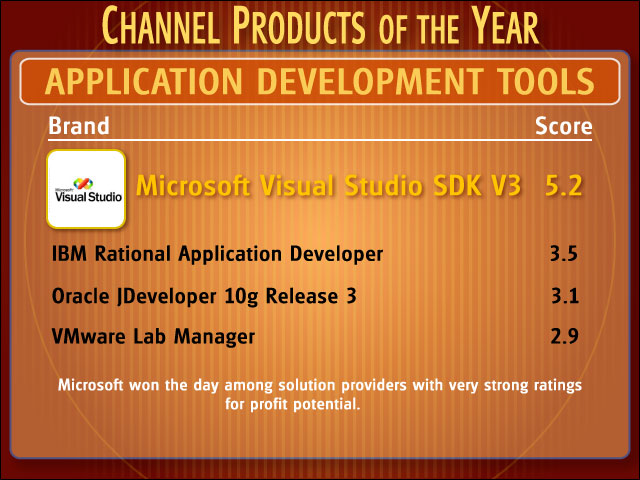 Voters rated Vista’s profit potential highly, but the race was close because Vista’s aftermarket opportunity is perceived to not be that strong. Brand recognition carried Microsoft to the strongest victory in any category.

5Channel Products of the Year – Database Oracle and MySQL had solid scores, showing that while Microsoft has a strong following, the company’s overall dominance in key product categories is slipping. Given its rivals’ ratings for profit potential and aftermarket opportunity, HP may wonder if solution providers are still smarting over HP’s efforts to demand their loyalty. Symantec managed to eke out a small victory, but CA and Hewlett-Packard both showed strength. HP has always enjoyed a loyal following among storage solution providers, which accounts for why it scored so well over rivals.

9Channel Products of the Year – Displays Viewsonic pulled off a narrow win over Samsung and NEC almost completely based on its strong channel presence and high familiarity levels among solution providers. Several years of hard work developing a more proactive approach to the channel seem to be paying off for SAP, with a narrow win over Oracle and Microsoft.

11Channel Products of the Year – Middleware IBM narrowly beat BEA and Oracle in most ratings, but thanks to a strong belief in the aftermarket opportunities with WebSphere, IBM prevailed. In overall score, HP turned in a decent performance, but clearly its major competitors are breathing down its neck as Xerox and Lexmark showed very strong channel presence and close ratings elsewhere. Cisco owns this category in terms of market share, but Linksys, a business unit of Cisco, showed strength across the board, and 3Com also had good channel presence. Though Symantec and Cisco shared the top honors, for Cisco the win represents the culmination of years of effort to become a major player in this space while Symantec finds itself sharing top honors in a category it usually expects to win. 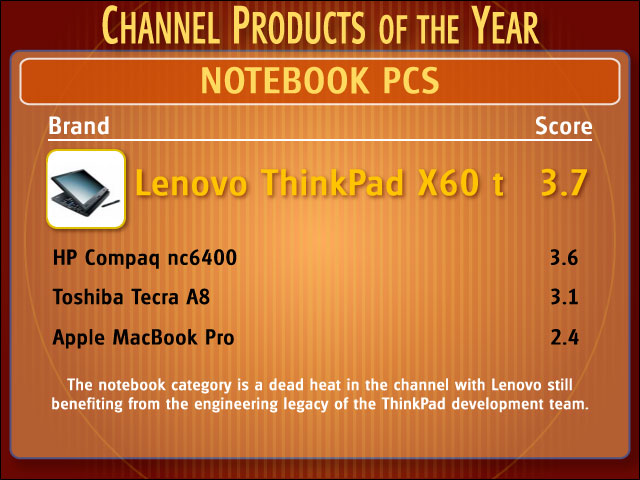 The notebook category is a dead heat in the channel, with Lenovo still benefiting from the engineering legacy of the ThinkPad development team. Not much of a surprise to see APC win, but in terms of channel presence, APC may want to put itself on notice because Tripp Lite showed itself extremely well-known among solution providers.

17Channel Products of the Year – Printers It doesn’t look like there are any serious challengers to HPs dominance in the channel, but Xerox and Lexmark did better in the ratings than most people might have expected. Cisco carried the day over no fewer than five other players, including RSA (now a unit of EMC), McAfee, SonicWall, Symantec and SurfControl. Symantec scored well in almost every respect. However, thanks to the high number of solution providers familiar with and finding potential and opportunity in McAfees SiteAdvisor Plus, the results suggest that Symantec could be vulnerable. Symantec racked up another security win but with far less dominance than might be expected, as both McAfee and SonicWall did well thanks to solution providers’ strong familiarity with their products. The real test in this category may come in 2007 or 2008, depending on when Microsoft ships the Longhorn upgrade for Windows Server. Adobe, Salesforce.com and Oracle were strong in the channel, but McAfee won the category thanks to solution providers seeing promise in aftermarket and associated sales based on Total Protection. 25Channel Products of the Year – System and Network Management No vendor in this category is really winning the hearts and minds of the channel when you look at how low scoring was here by comparison to the other categories.