120 Printer Features that Should Be Standard 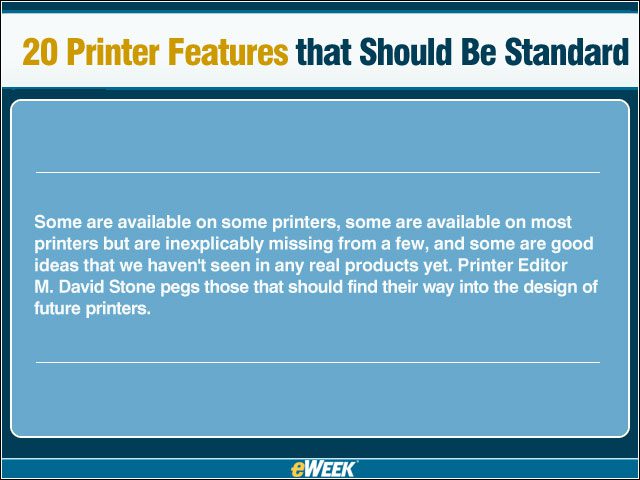 220 Printer Features that Should Be Standard – Cancel Printing NOW 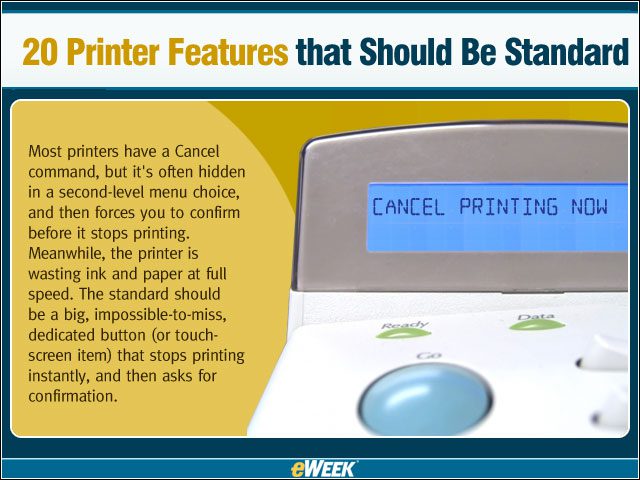 Most printers have a Cancel command, but its often hidden in a second-level menu choice, and then forces you to confirm before it stops printing. Meanwhile, the printer is wasting ink and paper at full speed. The standard should be a big, impossible-to-m

320 Printer Features that Should Be Standard – Direct E-mail (a.k.a. Digital Sending) 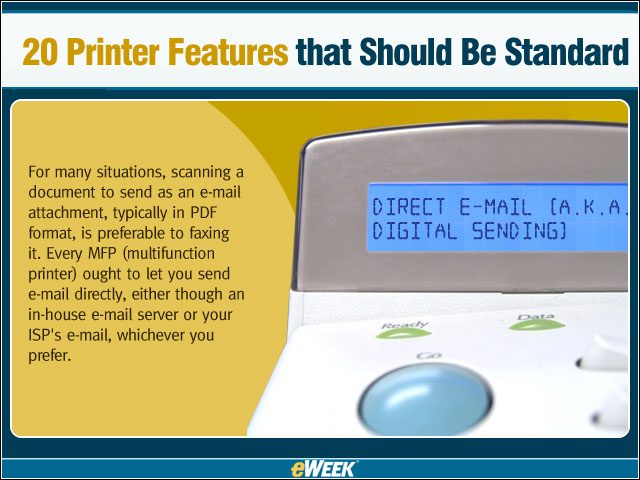 For many situations, scanning a document to send as an e-mail attachment, typically in PDF format, is preferable to faxing it. Every MFP (multifunction printer) ought to let you send e-mail directly, either though an in-house e-mail server or your ISPs e 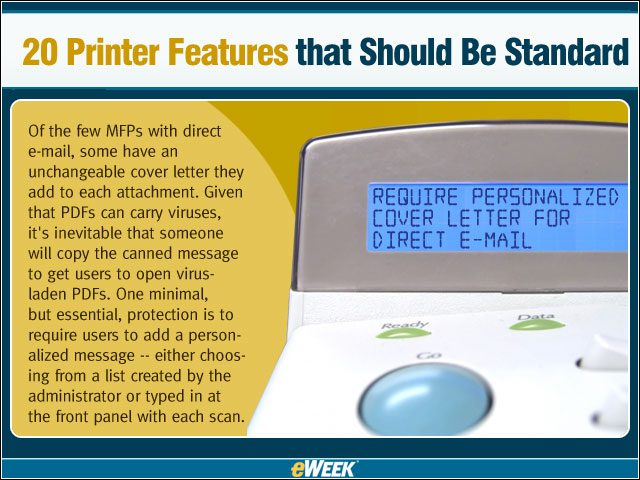 Of the few MFPs with direct e-mail, some have an unchangeable cover letter they add to each attachment. Given that PDFs can carry viruses, its inevitable that someone will copy the canned message to get users to open virus-laden PDFs. One minimal, but es 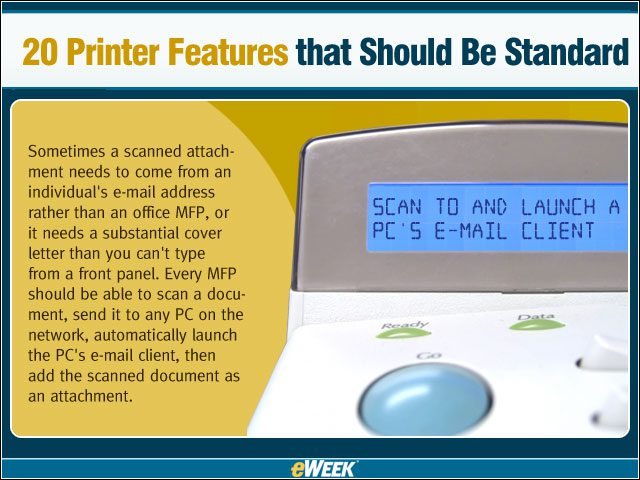 Sometimes a scanned attachment needs to come from an individuals e-mail address rather than an office MFP, or it needs a substantial cover letter than you cant type from a front panel. Every MFP should be able to scan a document, send it to any PC on th

620 Printer Features that Should Be Standard – Duplex Scanning 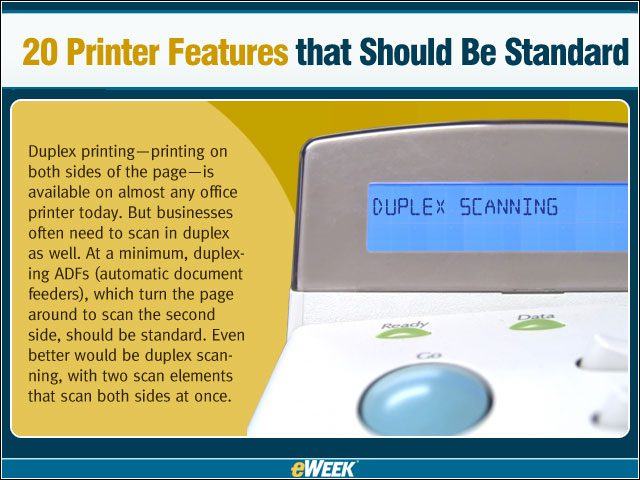 Duplex printing — printing on both sides of the page — is available on almost any office printer today. But businesses often need to scan in duplex as well. At a minimum, duplexing ADFs (automatic document feeders), which turn the page around to scan th

720 Printer Features that Should Be Standard – Mix and Match Copying 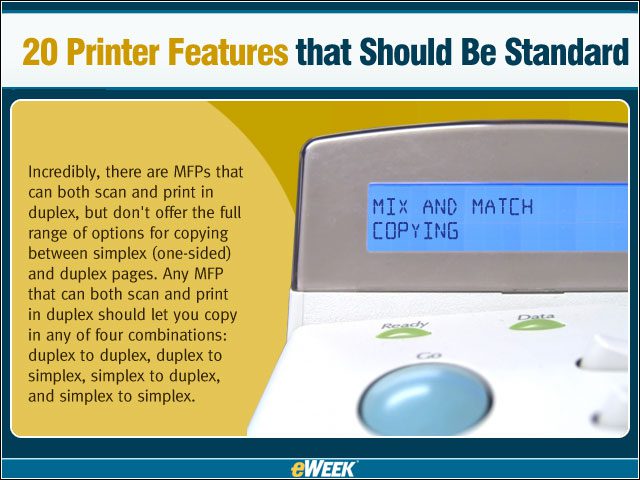 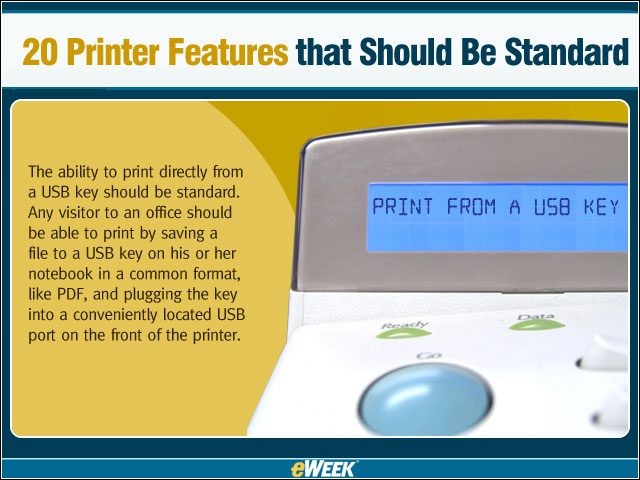 The ability to print directly from a USB key should be standard. Any visitor to an office should be able to print by saving a file to a USB key on his or her notebook in a common format, like PDF, and plugging the key into a conveniently located USB port 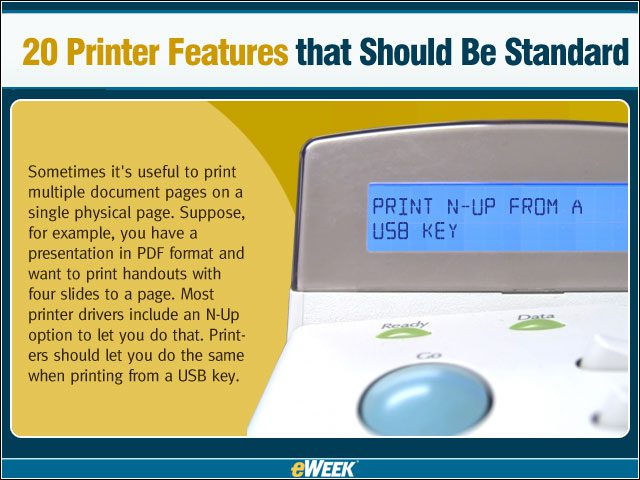 Sometimes its useful to print multiple document pages on a single physical page. Suppose, for example, you have a presentation in PDF format and want to print handouts with four slides to a page. Most printer drivers include an N-Up option to let you do 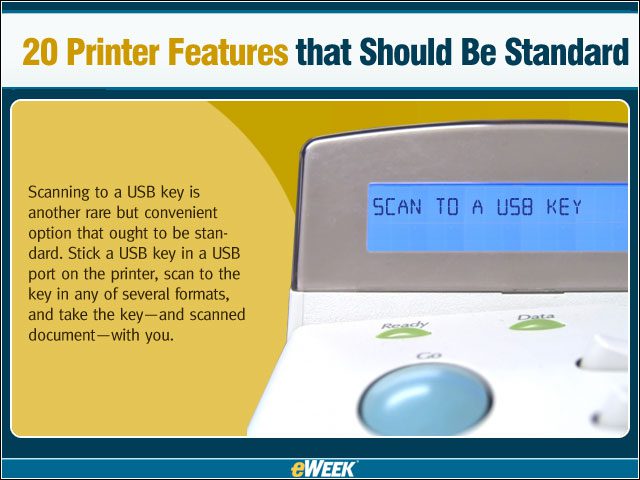 Scanning to a USB key is another rare but convenient option that ought to be standard. Stick a USB key in a USB port on the printer, scan to the key in any of several formats, and take the key — and scanned document — with you.

1120 Printer Features that Should Be Standard – Fax by Printing 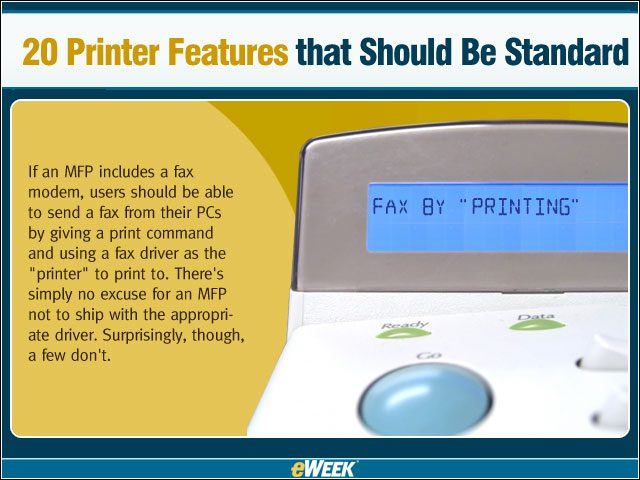 If an MFP includes a fax modem, users should be able to send a fax from their PCs by giving a print command and using a fax driver as the printer to print to. Theres simply no excuse for an MFP not to ship with the appropriate driver. Surpr

1220 Printer Features that Should Be Standard – Fax from a Utility 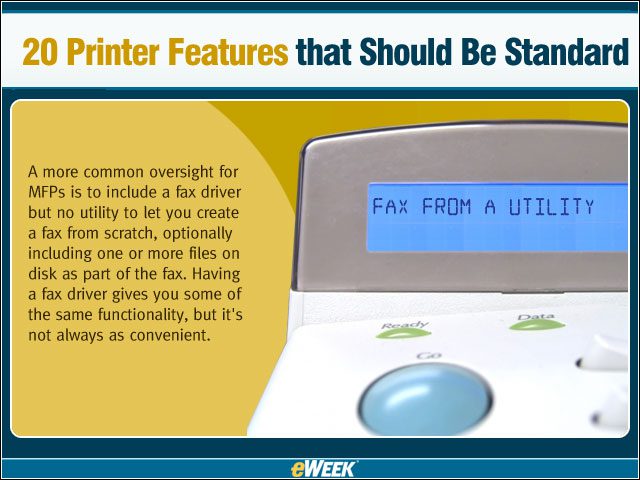 A more common oversight for MFPs is to include a fax driver but no utility to let you create a fax from scratch, optionally including one or more files on disk as part of the fax. Having a fax driver gives you some of the same functionality, but its not 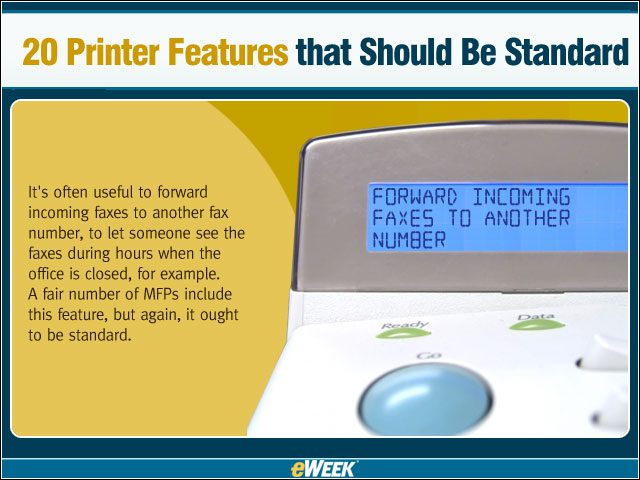 Its often useful to forward incoming faxes to another fax number, to let someone see the faxes during hours when the office is closed, for example. A fair number of MFPs include this feature, but again, it ought to be standard. 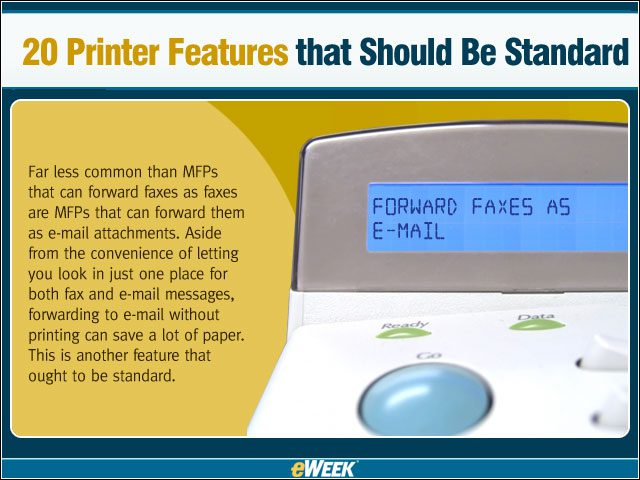 1520 Printer Features that Should Be Standard – OCR before E-Mailing 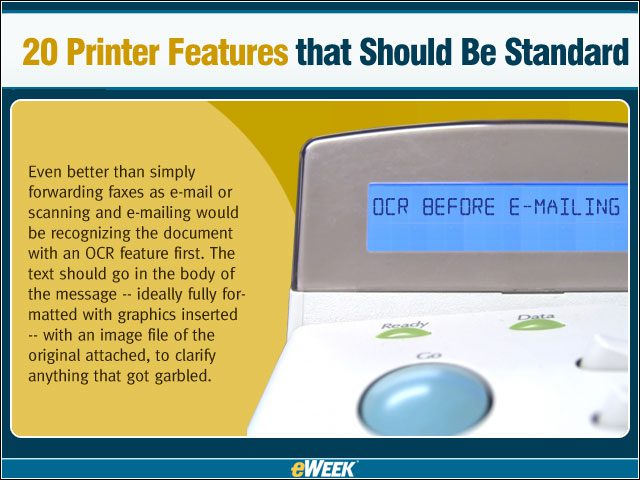 Even better than simply forwarding faxes as e-mail or scanning and e-mailing would be recognizing the document with an OCR feature first. The text should go in the body of the message — ideally fully formatted with graphics inserted — with an image file 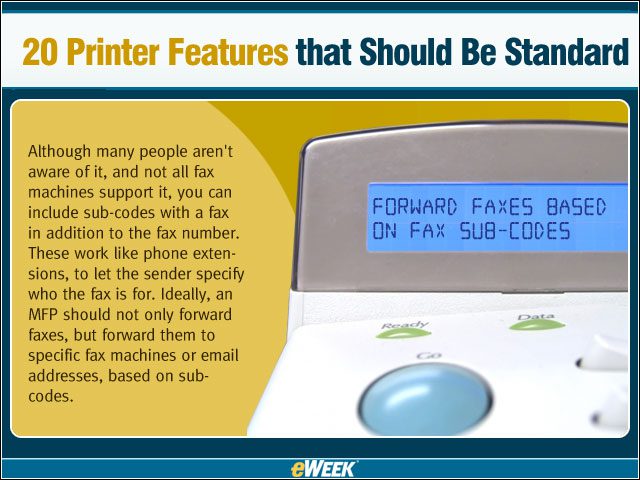 Although many people arent aware of it, and not all fax machines support it, you can include sub-codes with a fax in addition to the fax number. These work like phone extensions, to let the sender specify who the fax is for. Ideally, an MFP should not on 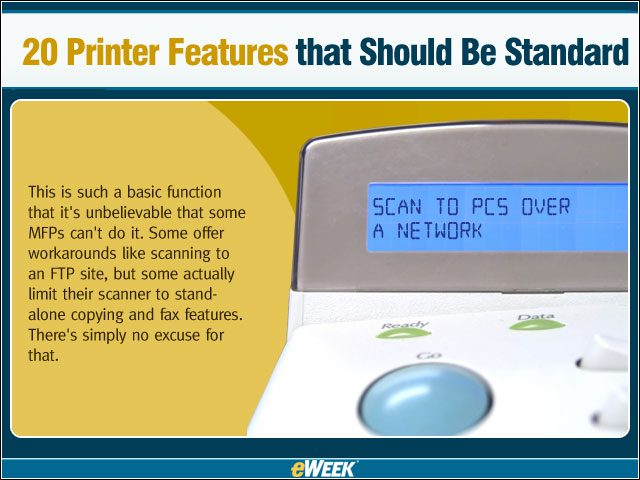 This is such a basic function that its unbelievable that some MFPs cant do it. Some offer workarounds like scanning to an FTP site, but some actually limit their scanner to stand-alone copying and fax features. Theres simply no excuse for that.

1820 Printer Features that Should Be Standard – Touch Screens, Yes. Buttons, No. 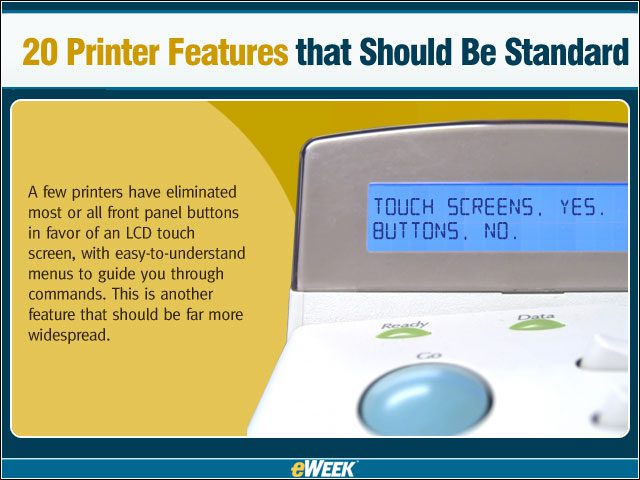 A few printers have eliminated most or all front panel buttons in favor of an LCD touch screen, with easy-to-understand menus to guide you through commands. This is another feature that should be far more widespread.

1920 Printer Features that Should Be Standard – Big, Bright, Colorful Screens 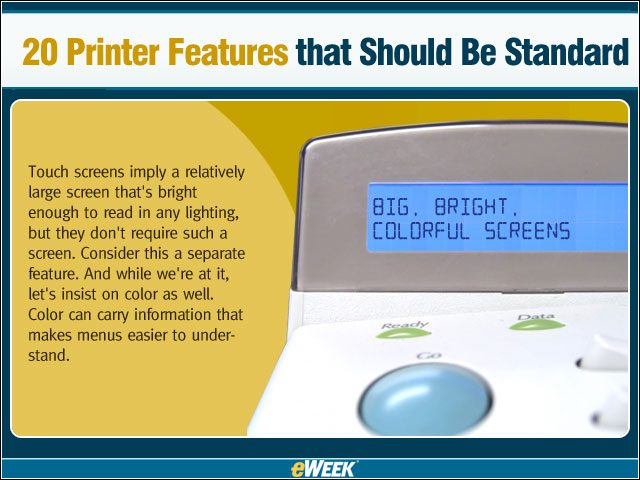 Touch screens imply a relatively large screen thats bright enough to read in any lighting, but they dont require such a screen. Consider this a separate feature. And while were at it, lets insist on color as well. Color can carry information that make

2020 Printer Features that Should Be Standard – Voice Commands 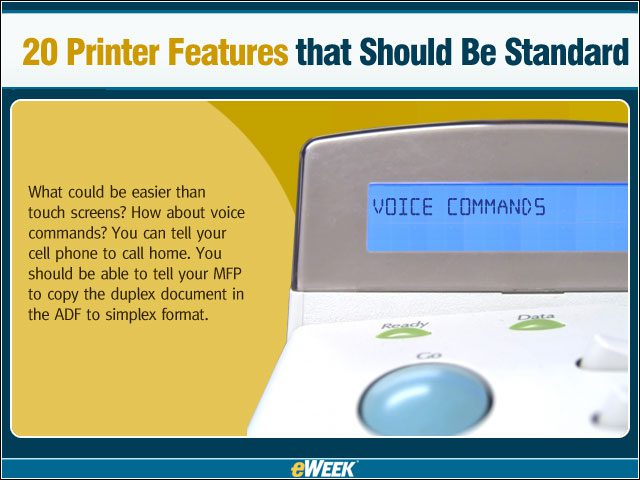 What could be easier than touch screens? How about voice commands? You can tell your cell phone to call home. You should be able to tell your MFP to copy the duplex document in the ADF to simplex format. 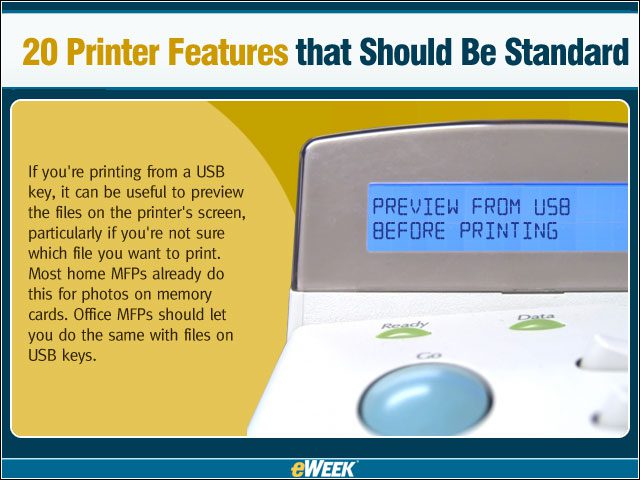 If youre printing from a USB key, it can be useful to preview the files on the printers screen, particularly if youre not sure which file you want to print. Most home MFPs already do this for photos on memory cards. Office MFPs should let you do the sa

2220 Printer Features that Should Be Standard – See More Slide Shows Like This One! 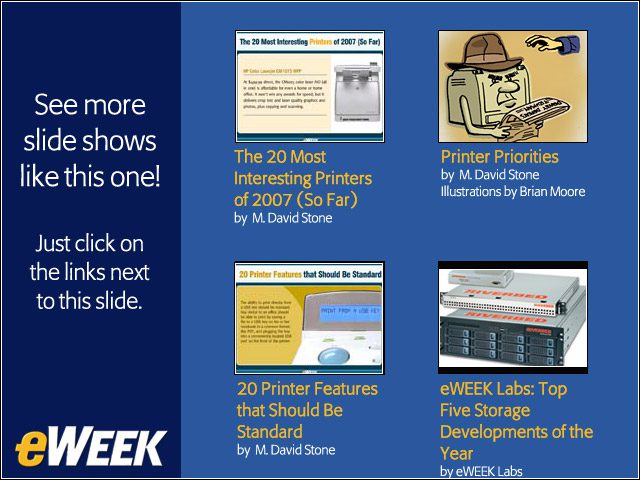