Printers, particularly multi-function printers, are more and more a security concern, partly because of government regulations (for health information, for example) and partly because most companies simply want to keep data private. Printers can compromis

220 Steps to Printer Security – 1. Overwrite the Hard Disk at End of Life

Printers with hard drives typically store data on the drive whenever they print, scan, fax or copy. In many cases they store additional data as well. When its time to say goodbye to the printer, youll ideally want an option to overwrite the entire drive

Sometimes its not enough to overwrite data at the printers end of life, since sensitive information can be stored on the drive at any time. To protect data from individual jobs, the printer should overwrite immediately after printing, scanning, copying,

Even if the printer overwrites data after every job, it may have additional information stored on it for easy reprinting, faxing or e-mailing. If you consider the stored information sensitive, youll ideally want to encrypt the drive with an administrator

Some printers let you bypass the hard disk and specify to print entirely from RAM (random access memory). This may slow some print jobs down significantly, but because these jobs never go to the hard disk, theres no data left on the hard disk to worry a

Probably the most common security feature for printers, secure printing lets you send a job to the printer then go to the printer and enter a password to print it. Unless you walk away at that point, this avoids the possibility of leaving sen

Security experts generally agree that smart cards offer better security than passwords, which often get written down someplace where others can read them. You might want to consider printers that control their secure-print feature with a smar

Another alternative to passwords is biometric devices, which often mean a fingerprint reader. However, fingerprints can be faked, and many people are uncomfortable at having their fingerprints stored. At least one company — Konica Minolta —

1120 Steps to Printer Security – 10. Secure Everything Else

For MFPs, consider the need for user authentication for other functions besides printing. Scanning, e-mailing, copying and faxing are all potential paths for sensitive information to go astray.

On those occasions when someone prints a secure job or copies a document and then walks away without remembering to log out, you dont want someone else reprinting the document. Look for a timeout feature, with a setting the administrator can

1320 Steps to Printer Security – 12. Turn Off the Reprint Command

An even surer way to protect against someone reprinting files is to turn off the printers reprint command, if you can, or get a printer that doesnt include a reprint feature.

You can safely bet that someone will occasionally print with secure print, get sidetracked and forget to actually print. For those times, you may want a feature that will delete unprinted secure print jobs after a designated time period.

MFPs may deliver scanned documents for internal use to an internal FTP site, directly to a designated PC or by sending them as e-mail attachments. To protect sensitive information in any of these cases, look for a feature that scans and sends

Some printers will let you add a hidden security watermark on printed documents. The watermark doesnt show on the original, but will show up if the document is copied. This can help to discourage unauthorized copying, simply by making clear

Some MFPs let users store print jobs or scanned documents they need repeatedly in whats usually called a mailbox on the printers hard drive. Consider whether you want to require a password or other user authentication before storing a file in

For MFPs that can scan and e-mail, being able to both define a list of destination addresses for a user to choose from and prevent users from adding an address from the front panel ensures that information can go only to a controlled list of

When sending an e-mail from an MFPs front panel, some MFPs will automatically enter the e-mail address for the user whos logged in at the MFP and prevent the user from changing the address. This stops users from sending e-mail that seems to

Account tracking features, complete with logs that show each job, automatically document who printed, scanned, faxed, copied or e-mailed what and when. Usually, this kind of information is used for internal billing or the like, but it can als

Some printers use a common OS (operating system) like some flavor of Windows, making them vulnerable to viruses. Others use embedded, proprietary operating systems that make them a lot safer. Find out what the OS is. If its something vulnerabl

2220 Steps to Printer Security – See More Slideshows Like This One 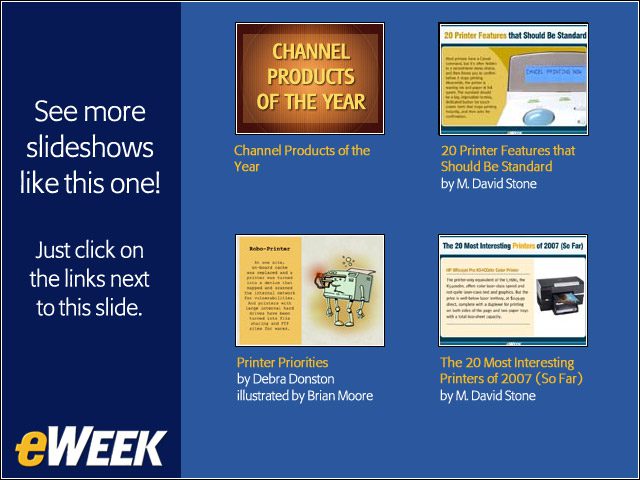