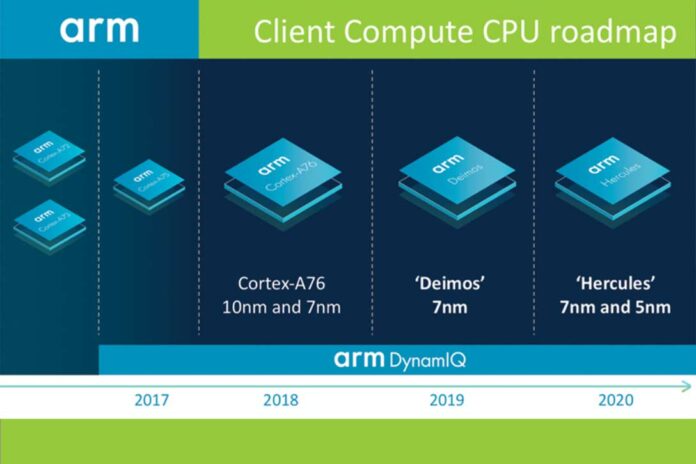 Arm officials have Intel and its market dominance in their sights with a processor roadmap that they say will challenge their rival in the laptop PC space.

In an uncharacteristic move, the chip maker this week unveiled a roadmap that includes not only the new Cortex-A76 CPU design that was introduced in May, which offers 35 percent more performance and 40 percent better battery life than its predecessor, the Cortex-A75. In addition, Arm officials said later this year the company will roll out “Deimos,” a 7-nanometer design that will bring with it more than a 15 percent improvement in compute performance.

In 2019, the company will come out with “Hercules,” which will come in 7nm and 5nm nodes. The chips will offer 10 percent improvements in both power and area efficiency, as well as efficiency jumps that come from the 5nm manufacturing process. Both Deimos and Hercules will be based on Arm’s DynamIQ architecture, which the company introduced last year and which builds on its big.LITTLE architecture.

Arm officials gave few details about the upcoming chips, but made it clear that they intend to take on Intel in the PC chip space, where the larger company holds more than 90 percent of the market. Arm for years has had the dominant system-on-a-chip (SoC) architecture for mobile devices like smartphones and tablets, but in recent years has looked to leverage the low-power and increasingly higher performance capabilities in the architecture to challenge Intel in such areas as data center servers and laptops.

It also is competing with Intel in other areas, including the internet of things (IoT).

Arm is slowly finding some traction in the server space, while a growing number of Windows 10-based laptop makers—including Lenovo, HP, Asus and Samsung—are embracing Arm-based Snapdragon chips from Qualcomm for laptops with high performance and efficiency.

“Leading PC OEMs already recognize that efficiency is a key differentiator for the always-on, always-connected, laptop experience which is characterized by very slim, light form factors, full day battery, and excellent responsiveness,” Nandan Nayampally, vice president and general manager of Arm’s Client Line of Business, wrote in a post on the company blog, pointing to the importance of always-connected capabilities as 5G arrives on the scene.

Nayampally looked to push back on the idea that the success of Arm’s architecture in the mobile space was based solely on its power efficiency, saying that the company’s annual design cadence drove performance gains as well as improvements in efficiency and space.

“This has enabled our ecosystem of silicon, software, and OEM partners to bring smartphones to market every year with new innovations and features,” he wrote. “Our latest roadmap highlights that we’re bringing these same annual PPA [performance, power and area] improvements to the PC industry, which now has both the opportunity and headroom to accelerate innovation like never before.”

The global PC market for more than five years saw shipments decline as consumers and business users turned to smartphones and tablets. However, Gartner and IDC analysts said that in the second quarter this year, shipments increased, creating the strongest quarter since 2012. Much of that was driven by the continued migration by businesses from Windows 7 to Windows 10. In addition, PC and component makers for several years have been pushing new form factors, including two-in-ones that can be used as either a traditional PC or tablet.

Intel continues to hold the bulk of the PC chip market, but it now is finding new competition not only from Arm and partners like Qualcomm but also from a reinvigorated Advanced Micro Devices and its Ryzen chip portfolio. Arm has been aggressively expanding into areas outside of the mobile device space since it was bought by Japanese IT giant Softbank in 2016 for $32 billion.

Nayampally pointed to Arm technologies that he said will be critical to enabling the company to accelerate the performance and efficiency of its designs even as Moore’s Law continues to slow. They include not only the DynamIQ architecture—a more flexible architecture than big.LITTLE that enables chip makers to create clusters of different-sized CPUs—but also the Artisan Physical IP processor manufacturing platform and POP IP, which enables manufacturing partners like Qualcomm to use 7nm SOCs based on the Cortex-A76 design to enable laptop-class performance in laptops while staying within power envelopes that are half of those of mainstream x86 processors.

“2018 was an important first step in expanding the Arm PC ecosystem and showing the world that we’re no longer bound to the idea that process technology will only incrementally improve every two years and that a laptop will need charging every few hours,” he wrote. “The pace of innovation that transformed smartphones into the compute platform of choice is now powering and transforming the larger screen devices.”