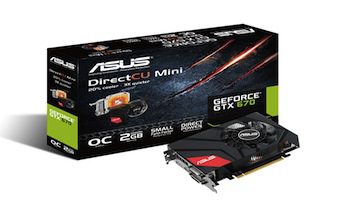 Mini ITX boards can often be passively cooled due to their low-power-consumption architecture, which makes them useful for home theater PC systems, where fan noise can detract from the cinema experience. The GTX 670 uses an exclusive DirectCU thermal design that combines a heat-spreading vapor chamber and the CoolTech Fan, which provides wide-angle airflow and venting to cool critical graphics card components.

Super Alloy Power capacitors, chokes and metal-oxide semiconductor field-effect transistors (MOSFETs) are hardened against heat and stress, averaging 2.5 times the lifespan of generic parts, according to a company release, while the card uses Direct Power technology to bridge power delivery components and the GPU for a cleaner and more efficient power supply.

Asus has redesigned the DirectCU cooler to fit small-form-factor cases and introduced a copper vapor chamber placed directly on top of the GPU for faster heat spreading and dispersal with 20 percent lower temperatures.

Rounding out the hardware elements is a DirectCU thermal design that combines a heat-spreading vapor chamber and the CoolTech Fan, which provides wide-angle airflow and venting to cool critical graphics card components.

Earlier this week Nvidia announced a family of chips that feature the company’s GPU Boost 2.0 technology, which intelligently adjusts GPU clock speed to maximize graphics performance. The chips also feature the company’s Optimus technology, which enables extra-long battery life by switching the GPU on and off so it runs only when needed, and GeForce Experience software, which adjusts in-game settings for the best performance and visual quality specific to a user’s notebook and keeps GeForce drivers up-to-date.