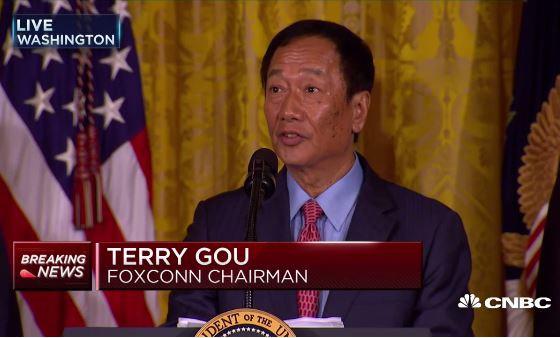 Chinese technology maker Foxconn, one of the largest manufacturing companies in the world, revealed July 26 that it will invest $10 billion to create a state-of-the-art facility in southeast Wisconsin, Chairman Terry Gou said at a White House press event.

Foxconn, which makes Apple’s iPhone and other products at its China-based factories, won’t make connected devices, at least at first. It will make flat-screen displays–touch and non-touch–which will create about 3,000 jobs in the region. Three cities–Milwaukee, Madison (capital of the state and home to the University of Wisconsin) and Kenosha–are situated in the area.

Gov. Scott Walker said the agreement could eventually expand to 13,000 jobs, with 22,000 indirect and induced jobs and 10,000 construction jobs. Walker also said the average salary would be about $53,000, plus benefits. The deal should also help the state attract and retain talent, he said.

The Wall Street Journal reported July 25 that Apple CEO Tim Cook has committed to build three big manufacturing plants in the U.S. It is not yet known whether Foxconn’s impending facility will eventually become a maker of Apple products.

Foxconn, which knows how to scale up the manufacturing of IT devices of all types but also has been cited in the past for poor working conditions by several international watchdog agencies, also will make dashboard screens for automobiles in addition to health care devices, Walker said.

The planned Wisconsin facility “signifies the start of a series of investments by Foxconn in American manufacturing in the coming years,” Gou said.

“This is a great day for American manufacturing,” said Speaker of the House Rep. Paul Ryan, a Wisconsin Republican. “It is another example of how our region is really a manufacturing powerhouse. … This is the topper of all toppers.”

The deal comes amid tenuous relations between the United States and China, because the current Republican administration works to create jobs while driving a hard line on trade policy. Foxconn is not a choice free of controversy: Otherwise known as Hon Hai Precision, the company has come into controversy in the past over labor practices in China.