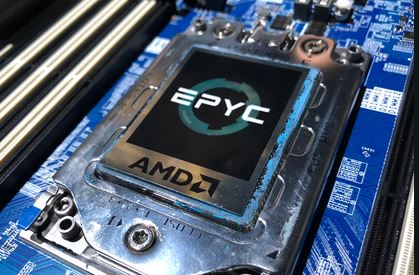 Surprises are generally frowned upon in business technology, mainly because the unexpected usually portends bad news for IT staff and data center owners. But occasionally surprises are harbingers of positive news or progressive developments that benefit businesses and the vendors on which they rely.

AMD’s new second-generation EPYC 7002 series processors fit comfortably into that category, as do the new Lenovo ThinkSystem SR635 and ThinkSystem SR655 servers that leverage AMD’s silicon. Let’s take a closer look at Lenovo’s latest data center solutions and how they make the most out of AMD’s new EPYC silicon.

In its official announcement last week, AMD underscored some of the second-generation EPYC’s key features and design points, including offering up to 64 Zen 2 cores per SOC, thus supporting up to 23% more instructions per clock (IPC) per core on server workloads. The new chips also offer up to 4X more L3 Cache that previous-generation EPYC chips.

Plus, the next-generation AMD Infinity Architecture provides the company’s customers access to the most I/O and memory bandwidth in its class, including support for PCIe Generation 4. Finally, second-gen EPYC includes a silicon embedded security subsystem and advanced security features like Secure Memory Encryption and Secure Encrypted Virtualization.

As a result, AMD claimed that systems utilizing the new chips will deliver “record-setting” performance while helping reduce total cost of ownership (TCO) by up to 50% across numerous workloads. The launch event also offered testimonials by several AMD strategic partners. Lenovo and HPE announced the immediate availability of new platforms based on second-gen EPYC, and Google and Twitter announced they would begin deployment of systems leveraging AMD silicon in the coming weeks.

So how is Lenovo putting AMD’s new EPYC solutions to use? In its launch announcement, the company noted that its initial offerings were specifically built for EPYC 7002 Series chips in order to help customers handle evolving, data-intensive workloads, including video security, software-defined storage and supporting virtualized and edge computing environments.

Lenovo claimed that the servers provide more throughput, lower latency, higher core density and the largest NVMe drive capacity of any single socket offerings in the market. In essence, the enhancements supported by AMD EPYC 7002 Series result in Lenovo servers that deliver compelling price/performance to lower customers’ total cost of ownership in response to continually rising IT costs. In addition, those capabilities also provide a foundation for new Lenovo hyperconverged infrastructure (HCI) solutions. According to the company:

The final measure of any new technology component lies in how well it helps end customers capture and enjoy unique new capabilities and value. By that definition, AMD’s second-generation EPYC processors deliver the goods in servers that optimally blend enhanced performance and high levels of system and power efficiency.

At the same time, those new features and functions are nothing without OEM vendors that fully understand how to put them to use. With its new ThinkSystem SR635 and SR655 solutions, Lenovo has proven that it has what it takes to make the most of AMD’s EPYC capabilities. The new servers also cast light on the considerable commercial success that Lenovo’s Data Center Group has enjoyed over the last few quarters, as well as the company’s leadership in global supercomputing and in delivering unique new offerings, such as its “pay for what you use” TruScale Infrastructure Services.

Overall, the new ThinkSystem SR635 and SR655 servers show Lenovo continuing to do what it does best and helping its customers and partners reap the benefits.